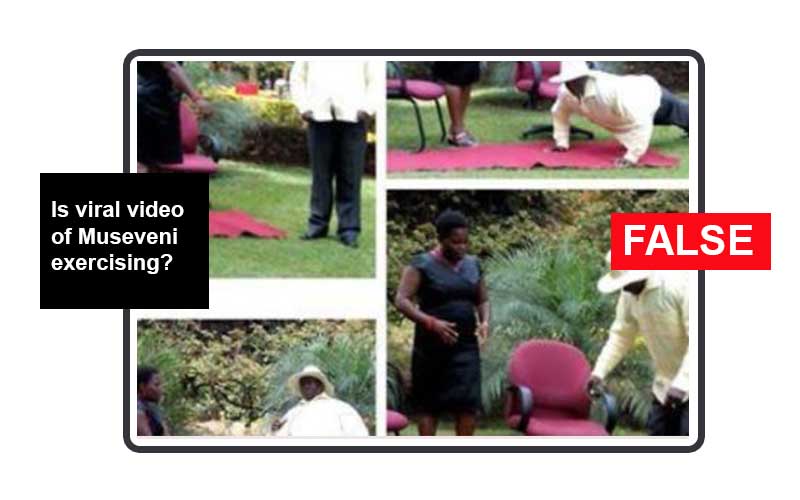 A viral video and several screengrabs from it have been widely shared on social media claiming to show Ugandan President Yoweri Museveni doing more 10 push-ups.

Museveni posts workout video to show Ugandans how to exercise indoors as promised. So copy pasted uhuru should too show us how we can fight boredom while at home .
William ruto
Kibe #lockdownextension #SingleMenChallenge pic.twitter.com/ezBmUfR6PD

The posts are Misleading. The video is of Ugandan comedian Herbert Mendo Ssegujja popularly known as Teacher Mpamire who earned his fame by mimicking President Yoweri Museveni.

In the clips, he has Museveni’s signature beige hat and yellow shirt and does push-ups on a red carpet in what looks like an open garden. Beside him is a woman who is counting the number of reps and laughs when Teacher Mpamire hits the 10-reps mark. "Mr. President you still have stamina, that’s very wonderful…" she says. Teacher Mpamire’s viral video, carefully shot to hide his face, comes barely a day after President Museveni said he will show people how to exercise indoors. Museveni was cautioning people from running and working-out outside as a way of preventing the spread of Covid-19 in the East African county currently under lockdown.

I saw a video of so many people on the Northern bypass walking and running around that, they are exercising. This should stop. If you want to exercise, you can do that indoors. I will show you how it is done tomorrow. I will do a video for you. pic.twitter.com/eQ6NmcEpZR

The president has lately been very active on Twitter since the first case of Covid-19 was reported in Uganda. Update: True to his words, President Yoweri Museveni shared pictures of him working-out in the house. This is an initiative of the Standard Group to combat fake news, misinformation and disinformation. If there’s something you want us to look into, email [email protected]