Nairobi
All the accused have denied the 12 counts they are facing. 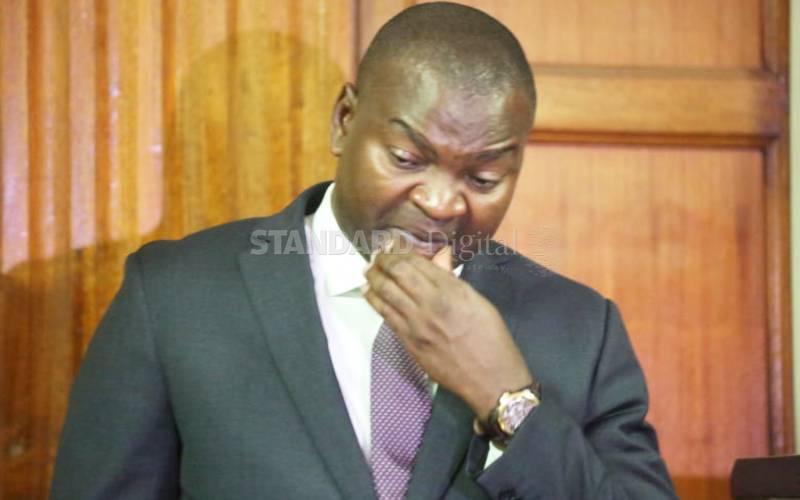 Former Sports Cabinet Secretary Rashid Echesa (pictured) was yesterday charged afresh in the Sh39.5 billion fake arms deal. The charge comes after the Director of Public Prosecutions moved to include two more suspects in the fraud case. A company involved in the scheme to defraud an American and Egyptian firearms dealers was also included in the charge sheet.

SEE ALSO: DP Ruto: Don't target the innocent because of me

The two suspects are Chrispin Oduor and Kennedy Oyoo, while the company is Pzels Ltd. Others who had earlier been charged alongside Echesa are Daniel Otieno and Clifford Okoth. Defence lawyer Cliff Ombeta yesterday asked Senior Principal Magistrate Kennedy Cheruiyot to review Mr Okoth's and Mr Otieno's bail terms. "The third (Okoth) and fourth (Otieno) respondents have only managed to secure Sh300,000 and Sh200,000 respectively to honour their bail terms. They are not in a position to raise more," Mr Ombeta argued. He also said Otieno suffers from diabetes, and his condition should be noted. But State prosecutor Abel Omariba urged the court not to review the bail terms. All the accused have denied the 12 counts they are facing. The charges range from forgery, obtaining money by false pretence to impersonating senior government officials. "Between October 2 and February 13, 2020, the accused attempted to obtain Sh39.5 billion from Stanley Bruno by falsely pretending that he would be awarded a tender by the State Department of Defence to supply military equipment,” read part of the charge sheet. Court documents say the plan to defraud the foreign arms dealers was hatched last year in meetings at the Deputy President's Harambee House Annex office, where transaction documents were allegedly signed by senior military officials. The bail terms application will be heard today.