Central
Nyoro finally sworn in after all procedures are complied with 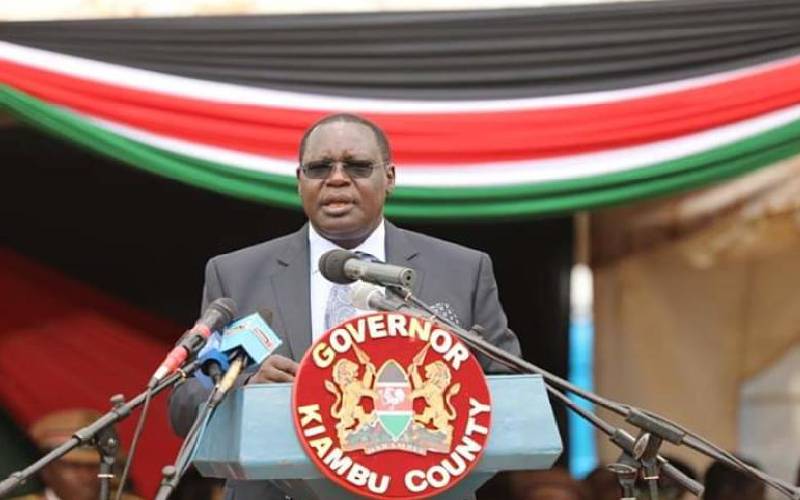 Agricultural expert and economist James Nyoro (pictured) has been sworn in as the third governor of Kiambu in a colourful ceremony skipped by the outgoing Governor Ferdinand Waititu and his supporters. Speaking before Nyoro took the oath, Kiambu Chief Magistrate Patricia Gichohi said all procedures of swearing in a governor had been complied with and it was time to swear in the new governor. “The law requires that the incoming governor takes the oath in public that is why we are here. All laws have been complied with,’ she said before handing over to Justice Onyiego to swear in Nyoro.

The event has been preceded by a notice in the special issue of the Kenya Gazette and the County Gazette published late on Thursday and signed by the Kiambu County Secretary Martin Mbugua as a requirement by law. The former adviser to the government on matters Agriculture and Policy officially replaced his boss with whom they have been involved in a power struggle. Waititu was impeached on Wednesday by the Senate with Speaker Kenneth Lusaka gazetting the impeachment and his removal hours after the House passed a motion to that effect. Justice John Onyiego conducted the ceremony, which was initially scheduled to be held on Thursday, but failed due to failure to comply with some of the procedures. The judge had on Thursday said the county committee on assumption of governor’s office had not followed the law regarding the exercise.

The law (Assumption of Office of the Governor Act 2019) requires publication and notification of the swearing in ceremony in the Kenya and the county Gazette stating the date, time and venue. The section also requires a governor to be sworn in the first Thursday after the 10th day following declaration of results. The provisions should apply with necessary modifications to the swearing in ceremony of the deputy governor who assumes office of the governor. “I understand the modifications relating to shortening the 10 days period but that has also not been done,” he said. Those in attendance

The ceremony was attended by over 60 MCAs. Political leders including Kiambu Woman Rep Gathoni Wamuchomba, Senator Kimani Wamatangi and his nominated counterpart Isaac Mwaura who participated in the impeachment of Waititu graced the ceremony.