Nairobi Governor Mike Sonko has secured his release after paying a cash bail of Sh15 million. The High Court sitting in Nairobi had on Wednesday granted him a Sh15 million cash bail or an alternative bond of Sh30 million with a surety of a similar amount. He is expected to appear in court for the mention of his graft case on January 15, 2020 at 9.00am. Court had earlier barred Sonko from accessing his office and commenting on the case on social media as were the directorates of public prosecutions and criminal investigations and the Ethics and Anti-Corruption Commission.

This is as the magistrate ruled that it was not within his court’s power to rule on Nairobi County lacking a deputy governor, throwing uncertainty on how county business will be conducted.  “If need be, he (Sonko) can be escorted to his office by the investigating officer or any other authorised officer,” the Magistrate ruled. The magistrate also ruled that he must deposit his passport and any other relevant travel documents in court. 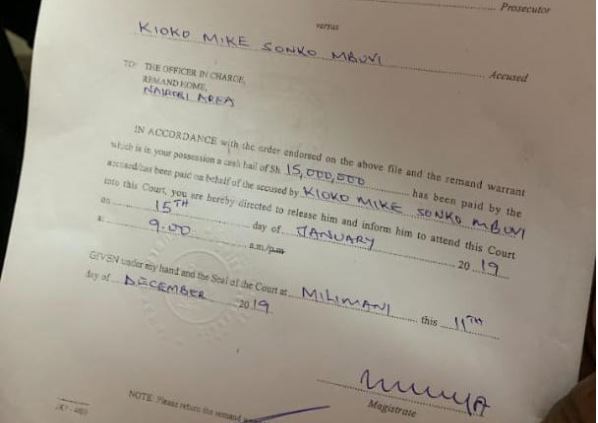 The governor is facing a total of 19 charges among them corruption, abuse of office and money laundering.

He is accused of conspiring with rogue business people and senior county government officials to embezzle more than Sh380 million from the county coffers. Sonko was arrested last week on Friday in Voi, following orders by the Director of Public Prosecution Noordin Haji.