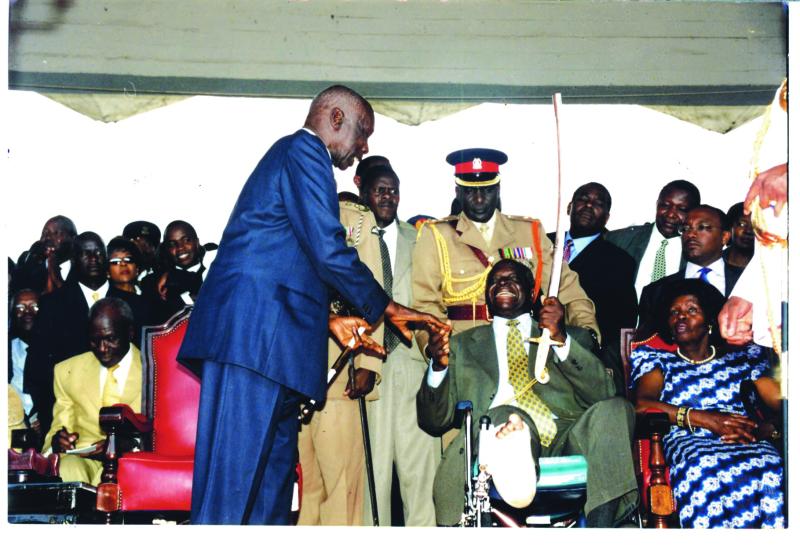 Former vice president Musalia Mudavadi and other top Kanu politicians watched President Mwai Kibaki’s 2002 swearing-in on TV because they were afraid of being humiliated at Uhuru Park. In his tell-all account, Mr Mudavadi says they let former President Daniel Moi go alone because they were not sure how they would be treated by the euphoric crowd and new Narc administration. On the morning of the swearing-in, Mudavadi says he went to State House and found Moi packing his stuff. He says Kibaki’s people ‘exhibited a lot of impatience and had an overwhelming sense of importance and brusqueness’.

“It was agreed that in the face of the Narc euphoria, Moi should go alone to the handing-over parade, accompanied by his security detail. The critical thing was that Moi should make the exit and he should do so with dignity,” Mudavadi writes in Soaring Above the Storms of Passion. Mudavadi says there was no point of him and other Kanu dignitaries going to the park ‘to mill around the crowds awkwardly looking for a place to sit’. He says that true to their fears, the ceremony at Uhuru Park turned out to be chaotic and ‘not befitting a president handing over power’. “I was part of a small group that watched the whole thing on TV at State House. It was unbelievable that security could collapse to this extent,” he recalls. Discourteous crowds He describes the discourteous crowds, the upbraiding they received from Ugandan President Yoweri Museveni, and the lambasting Moi got from Kibaki. Mudavadi claims that after the event, Moi returned to State House where they took tea together before he flew away to Kabarak in two choppers to begin his retirement. “Head of Public Service Sally Kosgei wept. She was one of the few people to accompany him in one chopper. As she boarded, one of her shoes came off and was left at State House as the chopper’s door was closed, ready for take-off,” he writes. But yesterday, Dr Kosgei discounted this version of events, saying she neither boarded the chopper nor lost her shoe at State House. She also explained the context of her tears and claimed Mudavadi was not among the people who lined up at State House gardens to bid Moi bye. “He certainly did not write that part of the book. If he did, then he should pursue fiction writing in the future. I was a civil servant; how could I follow a retiring president to his home? I had no business accompanying him,” she said. Kosgei said they had done a ‘meticulous’ job, through the Public Service Commission, of assigning staff who accompanied Moi on that journey. She said she usually met Moi at State House, but did not recall ever stepping foot in Kabarak except during the Easter of 1992 when she took a diplomat there for an urgent meeting. “If I lost my shoe then it was at Uhuru Park where we were attacked and I had to dash to my colleague’s car for safety. My car’s windscreen was shattered. I arrived at State House with one shoe,” she recalls. Decent transition Kosgei said she wept because she had seen their six-month-long plan for a decent transition go down the drain. “I was ashamed for all that had happened at Uhuru Park. Some of the dignitaries left in shame. Most of them knew me by my first name. It all weighed down heavily on me,” Kosgei said. She added that she was tired of ‘misrepresentations’ of her role and would hasten to finish her memoirs. “Most of these people have no clue what was happening. I consider Musalia to be a very pleasant person and that is why I am surprised he would write such things without even consulting or interviewing me,” she said.