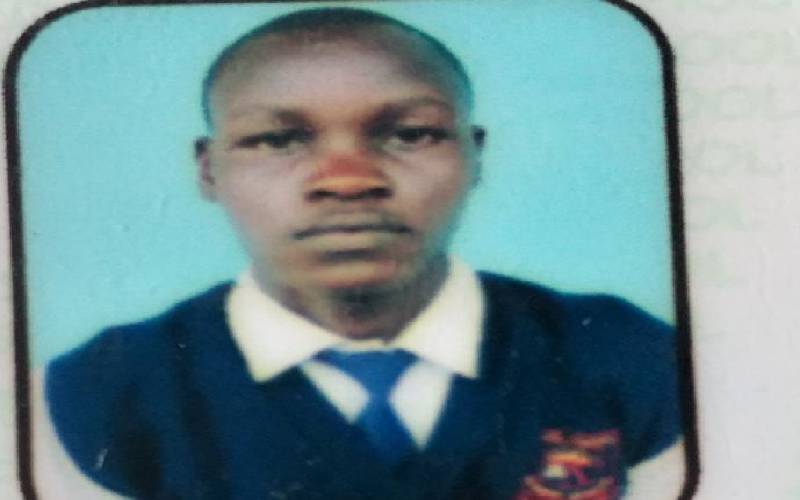 The police in Kisumu are investigating claims that a KCSE candidate died after he was attacked by guards and his colleagues. Stephen Olouch (pictured), from Joel Omino Secondary School, died at Jaramogi Oginga Odinga Teaching and Referral Hospital (JOOTRH) on Friday last week, three days after he was admitted to the ICU. The boy's mother, Philgona Adhiambo, claimed her son was assaulted for failing to pay school fees.

"He had been sent home over school fees. I had just bought him a few things he needed for the exams. I took a vehicle to our rural home in Ahero as he headed to his brother’s house in Nyalenda Estate where he lived,” she said. She said before reaching home she received a call informing her that her son had collapsed. Ms Adhiambo wants an autopsy carried out to determine the cause of her son’s death and the perpetrators brought to book. She said the school management had sent her son home over fee arrears, just two weeks to exams. “Since we had no money, Oluoch decided to return to school hoping to plead with the management to let him sit the exam and clear the fees later,” she said.

However, Oluoch is said to have been denied entry into the school by the guards who told him the principal, Mr Richard Nyayal, had ordered them not to allow in any student with fee balance. Oluoch reportedly tried to force his way into the compound and this led to a scuffle with the guards and he was severely beaten forcing him to flee. He ran and hid in a classroom. A prefect then ordered him out because of the order the principal had issued on students with fee arrears. "Oluoch confided in me that the angry prefect, banging his locker, shouted that his fees balance could feed the whole school for the remainder of the term,” said Samwel Omondi, Oluoch’s elder brother. This did not go down well with Oluoch who is said to have attacked the prefect. This attracted other prefects who landed on Oluoch with kicks and blows. That is when one of them reportedly attacked the boy with a piece of wood, inflicting serious injuries.

The principal is then said to have called officers from Nyalenda Police Station who arrested Oluoch and detained him over claims he had a roll of bhang. After the officers discovered Oluoch had been injured, they released him without recording any statement or pressing any charges against him. They did not also book him in the Occurrence Book. "It was while he was in police custody that I was called. The caller informed me that my son had been arrested but was in a lot of pain. They'd only given him painkillers," Ms Adhiambo said. She said she went to the school and demanded to know why she was not informed of her son's arrest and the reason for it. Adhiambo said she was issued with Oluoch's suspension letter and informed that she was to appear with him before the board in two days. And yesterday, Nyayal admitted that Oluoch had been sent home for fees but denied claims he was assaulted. The principal said he called the police after a roll of bhang was found in Oluoch's bag. “Officials from the Ministry of Education visited the school and even wrote a report over the matter. You can get much information from that document,” said Nyayal. County Director of Education Isaak Atebe said he had received a report about the boy’s health, but said there was no information regarding the alleged assault. Nyanza Regional Police Coordinator Vincent Makoha said an inquest file has been opened on the matter. JOOTRH Superintendent Peter Okoth said Oluoch died as doctors tried to save his life.