Safety of women not just a private issue 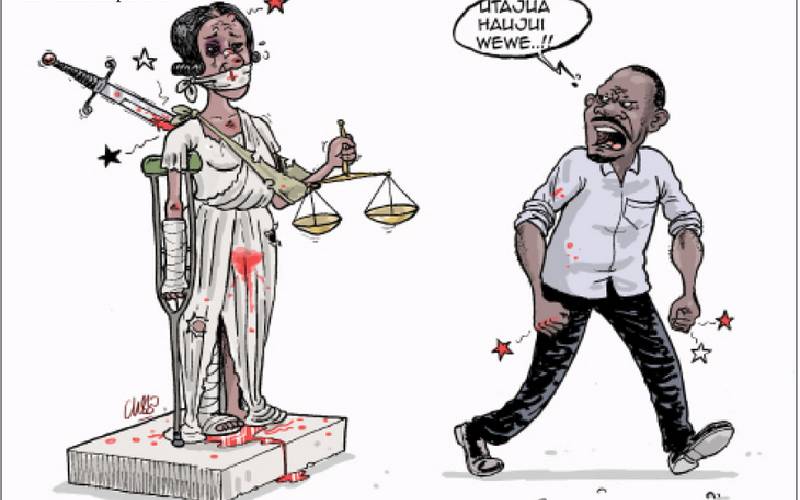 Seeking to unwind in a party after a long workday in her stressful role as a prison warder, Carol Chepchirchir went missing on a Wednesday night. Her lifeless body was found with multiple head and chest injuries, dumped like rubbish in a thicket in Subukia. The key suspect is one of Carol’s male colleagues. Ivy Wangechi, a bright and beautiful young medical student at Moi University, was hacked to death, sending shockwaves across her community and the entire nation, following a sick retribution by her shunned boyfriend.

These heinous crimes are neither isolated incidents nor are they part of a new trend. Violence against women (VAW) according to the UN is defined as “any act of gender-based violence that results in, or is likely to result in, physical, sexual or psychological harm or suffering to women… in public or private life”. Unicef considers it to be one of the world’s most pressing epidemics, prevalent in all social, economic, cultural and ethnic classes.

Up to one in two women around the world experience male violence, including rape, incest, forced prostitution, threats, humiliation, blackmail and also traditional practices such as female genital mutilation. Furthermore, VAW is an elusive problem. In Kenya the statistics are often worse, with 75 per cent of women reporting to have experienced violence at home and most of them – especially in rural areas – are still far behind in terms of access to cash, land rights and education. It usually happens behind closed doors and often it is shrouded in pseudo-romantic terms, such as “a crime of passion”. Government has already made great strides on this issue, and President Uhuru Kenyatta has emphasized time and again his commitment to international law and conventions and to transforming Kenya into a bastion of modernity.

Parliament scrapped an old Constitution that allowed discrimination on the basis of sex and adopted an extremely broad definition of VAW in the Sexual Offences Act in 2006; and the judicial system is vigorously investigating the cases of Carol and Ivy. We should salute the government for strides being made; but also call for more.

SEE ALSO: Women were not born to be men's punchbags

Beyond violating fundamental human rights, acts of VAW have grave economic consequences. The Big 4are the development goals set forth by President Uhuru Kenyatta: food security, affordable housing, universal healthcare and manufacturing. Both in terms of substance and the level of detail and in their timeline for realization, the Big 4 are refreshingly transparent and ambitious far beyond what we are used to expect from government. Women represent at least half of our national capacity for growth and development in both the public and private sectors. Just this week we have seen the rise of Anne Mwangi, the first female elected to lead the formidable University of Nairobi Students Association (UNSA). This week we also saw five impressive women-led start-ups contributing to Kenya’s brand as the silicon valley of the Savannah. These talented women won the Standard Chartered Women in Technology Incubator programme, out of over 170 applicants, and were awarded Sh1 million in seed funding to help them grow their businesses. Yet violence can make women physically and mentally ill. It can also affect women who are not directly assaulted, by deterring them from seizing opportunities and realizing their skills in the economy.

What makes a leader

To be a good leader and to innovate you have to be “playful, experimental and be a person who never takes no for an answer”, Strathmore University Prof Ogut wisely points out. However, such qualities cannot be realized by intimidated and abused individuals. The monumental Big 4 require a committed work-force utilizing our full social potential. We must all spread the message that to realize these policies our society as a whole has another task: to keep women safe at all costs, to ensure their dignity is kept at home, as it is in the workplace, or in the street, and to maintain those principles in our communities. Keeping women safe is not just a moral and legal imperative. It is a factor of development. It is essential to turning the Big 4 into a reality. Ms Munuhe studies International Relations at the University of Nairobi