Details of the top 15 national schools preferred by KCPE stars have emerged.

Data sieved by the Sunday Standard shows that Pangani Girls was the most sought after school by girls when they applied for Form One slots.

A total of 87,209 students picked Pangani Girls as their first choice.

The school, that has a capacity of only 336, attracted a total of 110,835 applications from students who picked it either as first, second, third or fourth choice.

Some 11,015 students selected Pangani Girls as their second choice as 5,370 selected it as third choice and 7,241 making it their last choice.

Alliance Girls only attracted 7,078 applications from students who picked it as their first choice.

Shockingly, a total of 73,807 selected Alliance Girls as their third choice. Ordinarily, the school -- with a capacity of 384 -- was the first choice of most female candidates in previous years.

This year, only 7,876 students picked the school as their second choice while 3,306 as fourth choice.

Overall, a total of 92,067 candidates sought to join the school.

Some 4,225 students applied to join Moi Girls Eldoret while some 4,051 selected Kenya High as first choice.

The two schools have capacities of 336 and 288 respectively. 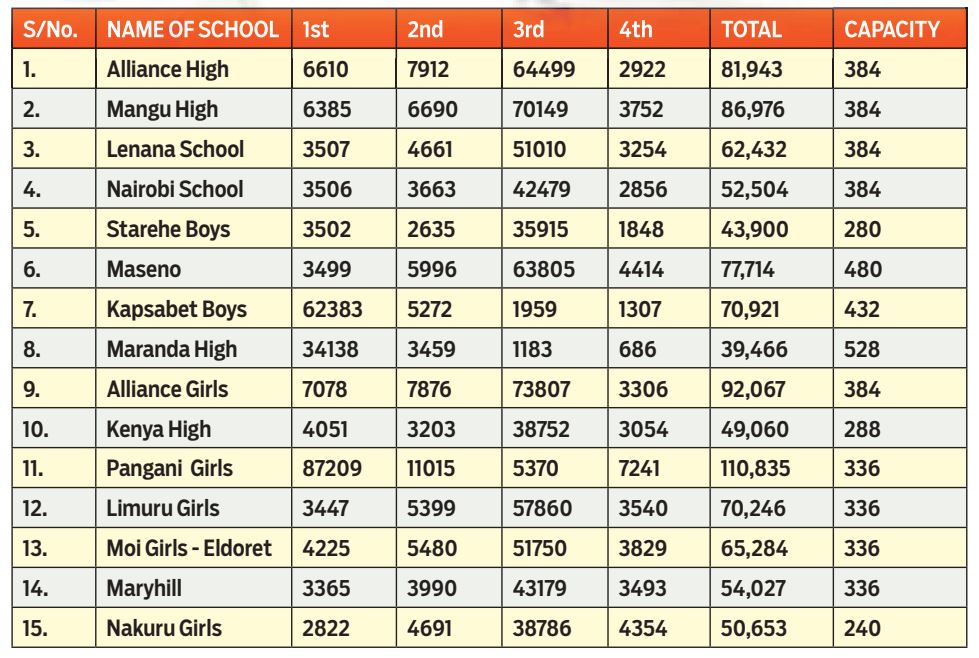 Under the boys’ category, Kapsabet Boys was the most preferred national school. A total of 62,383 students selected the school as their first choice.

The school that has an overall capacity of 432 attracted a total of 70,921 applicants.

Only 5,272 candidates selected Kapsabet Boys as their second choice. Another 1,959 picked the school as third choice while 1,307 as fourth choice.

Maranda Boys was the second best school with some 34,138 students picking it as their first choice.

Mang'u High School was another top sought-after school, with total applications of 86,976. However, 70,149 students selected the school as their third choice.

Some 6,385 students picked Mang'u High as first choice. A total of 6,690 selected the school as their second choice while another 3,752 as fourth and last choice.

Others are Moi Girls Eldoret, Maryhill and Nakuru Girls schools.

Basic Education Principal Secretary Belio Kipsang said the 1,038,162 candidates who sat the examinations will get Form One slots.

Extra County, County and Sub County schools have some 998,000 slots for students.

Ministry data also shows that there are some 129,168 slots in all the 540 Extra County schools.

“We shall make sure all candidates gain admission to secondary schools as promised under then 100 per cent transition,” said Dr Kipsang.

Selection of candidates to Extra-County schools is based on a 20:40:40 ratio, shared across the host sub-county, the host county and other counties in that order.

The available places in county schools will be shared out between the sub-counties on a 20:80 ratio.

By Elphas Wanda 27 mins ago
Premium Why Kenya should embrace electoral college, US style

By Babere Kerata Chacha 27 mins ago
Premium Give Queen Elizabeth a break; it's unAfrican to attack the dead
.