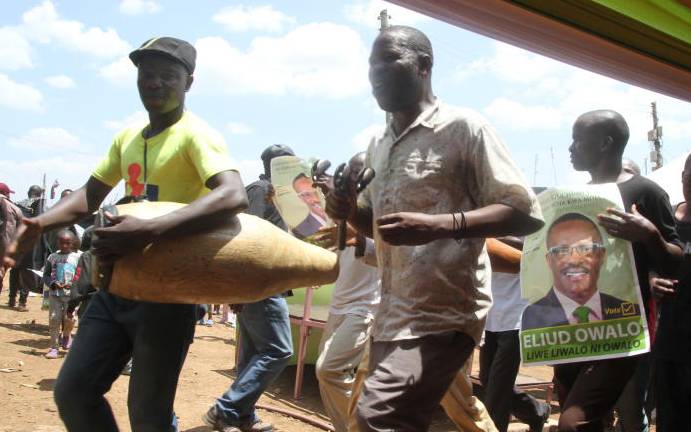 The Luhya toadies are at it again. By dint of media reports in which a clique of leaders and pseudo leaders from Western Kenya claim Musalia Mudavadi does not value his Luhya kinsmen for having chosen Eliud Owalo to contest the Kibra parliamentary seat by-election, I declare them avowed tribalists; enemies of national cohesion, healing and integration.

Kibra Constituency is not a locality inside the Luhya nation, neither is it a fiefdom of the Luhya kingdom; it is a cosmopolitan constituency in the country’s largest metropolis and Mr Owalo is a Kenyan. Conversely, those lambasting Mr Mudavadi for choosing Owalo, yet have been shouting themselves hoarse in support of Deputy President William Ruto are the biggest enemies of Luhya unity.

They are equally guilty of not ‘valuing their kinsmen’ because Ruto is not a Luhya; not even through some obscure relationship with his forefathers. The leaders’ duplicity in calling for a Luhya presidential candidate for the 2022 elections while at the same time declaring William Ruto the ‘president in waiting 2022’ is not just demeaning, it is symptomatic of leadership vacuity in the Luhya nation.

To reiterate, the Luhya unity calls are a circus, a mirage only visible to politically delusional minds. Under the present circumstances, the unity will not materialise even if those shouting loudest about it live to be 150 years each. Calls on Mudavadi to make way for a younger generation of politicians to spearhead the politics of the fractured Luhya nation reinforces the fact that those opposing Mudavadi’s choice for the Kibra by-election know their debilitating inadequacies, and that they have nothing new to offer.

Many of them have been tried before but failed the aptitude test. Some of them were rejected by the electorate while others got kicked off prime jobs that they took for granted even though they knew they did not merit them. While not holding brief for Mudavadi, none of these political hecklers can hold a candle to him in terms of leadership qualities and articulating pertinent issues, away from self-effacing praise singing.

To peg the failure of Luhya unity on the Amani National Congress’ choice of candidate for the Kibra by-election is escapist and myopic. It is over two decades, by my count, since the ‘Luhya unity’ song was officially released, but it has never sold a single copy to date. What has been the cause of that dismal failure if not unadulterated avarice? How can people who speak from both sides of their mouths ever think of anything other than to feather their nests?

The first step to unity is finding a common thing on which to rally a group of people or communities. A common language and customs bring people together, yet the Luhya, with 17 sub tribes, as many dialects and different customs; besides the suspicion some sub tribes harbour against others, cannot foster unity in the sense that Luhya leaders envisage. The bigger, dominant community will always want to hog the limelight, and therein lies the rub. The ‘our time to eat’ philosophy will always sully perfunctory attempts at Luhya unity.

Mumias town, once vibrant and home to some of the most vociferous anti-Mudavadi crusaders is a pale shadow of its former self. Farmers who used to walk with a spring in their steps because cane farming was lucrative are a sorry bunch today because the collective leadership of the area lacked the spine to stand up to the cartels that precipitated the fall of Mumias Sugar Company.

Parents in the sugar belt, who solely depended on cane farming, can no longer afford to fend for their families. Many kids do not attend school for lack of school fees. Too late in the day, some of these farmers are uprooting their cane to try alternative farming, but the gains will be slow in realising, if any. Maize farming that would have given relief is on its death bed as well.

Barely 50 kilometres away, Webuye town is a veritable ghost town because the same leaders from Western were so distracted chasing an elusive Luhya unity, the Pan Paper Mills was allowed to die, and with it thousands of jobs and livelihoods. Nzoia Sugar Company in Webuye is ailing.

Of course, the national government is culpable in all these for having abdicated its responsibilities to citizens and allowed a few greedy individuals with the right connections to dictate the Government’s tempo.

One sure way of doing this is killing each and everything that is beneficial to the common man. None of the profitable, prestigious companies I knew while growing up is alive today. Was it worth the while fighting for self-rule only to turn upon ourselves and run practically everything to the ground so that a handful unscrupulous individuals can live in affluence off the sweat of millions of destitute countrymen?

Luhya unity crusaders must realise that of itself, a Luhya presidency will not put food on the tables of kinsmen. Revive the comatose industries, empower your people economically and you will leave an enduring legacy. Forget the futile chants.