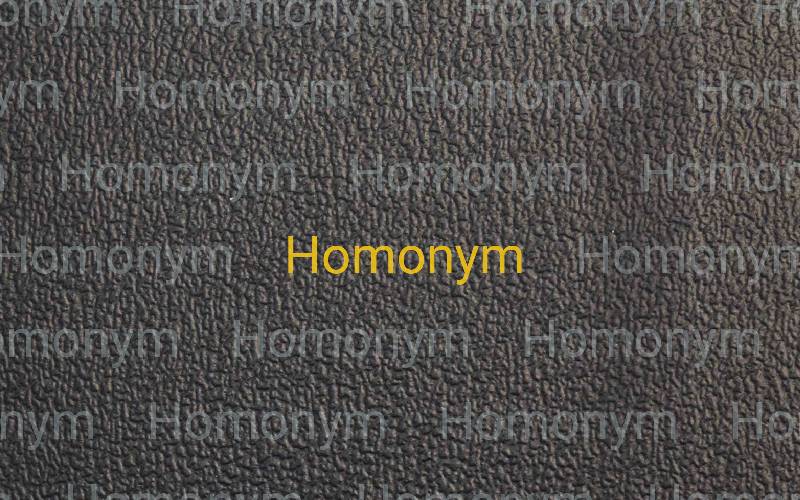 Does the complexity of the English language have to do with its ‘bankruptcy’?  Well, never mind, this is a rhetorical question that leads us to today’s discussion.

In small part, both ‘bankruptcy’ and complexity of the English language are amply captured by the existence of homonyms, polysemy and homophones.

Besides, there are other aspects like context, syntax and diction that dictate how we understand what has been written.

As we know, homonyms are words that are spelt the same way or sound the same.

But in as much as some of the words are spelt alike or pronounced in a similar manner, they bear no relationship.

For example ‘ship’ and ‘sheep’, ‘fort and fought’, “guerrilla and gorilla or simply ‘sow’ to which the meanings attached are; a female pig or the action of planting seeds in the garden.

In this last example, you can see clearly that there is no relationship between pigs and planting.

Polysemy on the other hand refers to words that have varied meanings but bear a relationship. An example of polysemy is in the sentences “Harrison drank a cup of hot milk” and “Ben had a hard time trying to milk the cow that could not stand still”.

The sentences mean different things, but the operative word (polysemy) is ‘milk’.  Milk and cows have a relationship.

On the other hand, homophones are words with the same pronunciation but different meanings though, at times, they also bear the same spelling.

‘Rose’ could be the name of a lady, it could also mean a flower or it could be used as the past tense of the word ‘rise’.

Context is defined as the circumstances that form the setting for an event or idea in terms of which it can be understood.

Thus, context would help, for instance, in determining what meaning we attach to the word ‘sow’ as earlier shown.

For example; “John woke up early, donned his gumboots, took a hoe, fertiliser and proceeded to the farm to sow, hoping he would be through with the work before midday”.

The things that give us the context here are seed, fertiliser and farm. Conversely, “Mary’s pigsty has only one sow at the moment. The rest have been sold”. In the last example, what gives us the context are the words ‘Mary’s pigsty’.

In some cases, you might have noticed that only a thin line separates polysemy, homonyms and homophones. On that account alone, one needs to be cautious in diction.

Therein lays the complexity. The ‘bankruptcy’ (in my view) arises when a single word, polysemy and homonyms, means different things.

To the examples already given, add the words ‘stalk’ which means; ‘to approach someone stealthily or ‘the stem of an herbaceous plant’ and ‘Long’ used to express yearning, duration or the length of something.

A social media post in which the writer not only lamented that death had robbed Kenya a promising leader in Ken Okoth, but also that the deceased had to be cremated, prompted this column.

The cremation of Ken Okoth, though not the first time such a thing has happened in Kenya, generated national discourse, with most of the participants expressing support for traditional burials.

Simply, the concerned fellow wrote: “Why like a thief?” Since the context was clear, it was easy to understand the writer used the word ‘like’ as a comparison. In a different context, ‘like’ can be used to show ‘affection’.

If a beautiful, honest lady befriends a notorious thief, the same question can be posed.

This introduces the aspect of syntax. Ideally, syntax is the grammatical structure, or manner of arranging words to create sentences that are readily understood in whatever language they are written.

Consider the following examples that illustrate the effect of syntax on how we present or understand the written word.

These sentences basically mean the same thing, but emphasis varies depending on where certain words and punctuation marks are placed.

The aspect of passive and active voices, earlier discussed, comes into play as well.

As a word of caution, the emphatic word or phrase should either come first, or last. In these sentences, diction, which is defined as the choice of words, remains the same throughout.

How to make modern-day marriage work | BLACK AND WHITE

KIBRA DECIDES: Voters at DC Grounds elect their next MP

Pyrethrum production is expected to hit 18,000 tonnes annually with the government targeting the Chinese market