Prepositions take on different meanings depending on context 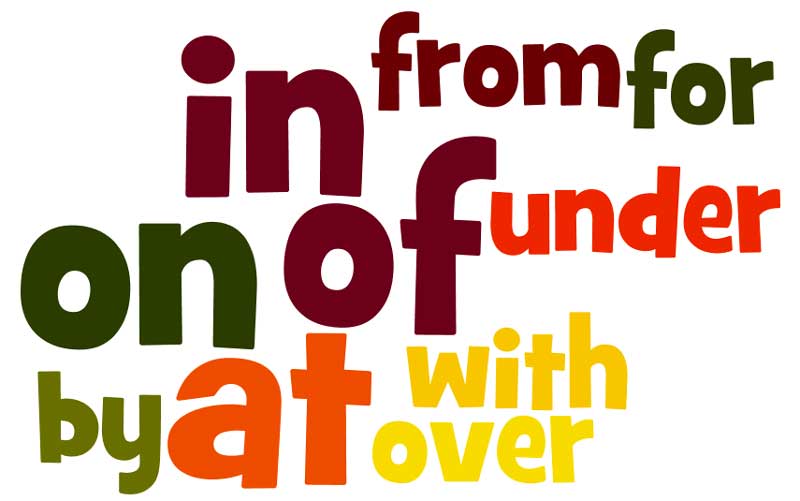 Inter alia, last week's column discussed the preposition 'with'. That was prompted by a quoted passage that failed to adequately convey what the writer intended. In addition, we often come across expressions like; “He met up with" (he met with), "out of the window" (out the window), "inside of" (inside), "where did she go to"(where did she go), "where is your home at" (where is your home)or "put in the back of the car" (Put at the back or on the back seat).

Admittedly, many of us occasionally get it wrong with prepositions without being aware of it. Only when someone points it out, whether in good faith or cheekily as so often happens on social media, do we notice the mistakes we make. The cause of the confusion is easily attributable to the different contextual uses of prepositions.

Today's column will highlight additional prepositions that we encounter on a daily basis in the usage of the English language. Yet to do so, we need to first remind ourselves what prepositions are and the categories into which they fall to put everything into perspective.

Prepositions are words that come before nouns, pronouns or expressions and show the relation between one word and another. There are several categories of prepositions, namely; preposition for place, time, direction, agent and prepositional phrases. The prepositions do not restrict themselves to a specific category since most are used in nearly all the categories. More importantly, prepositions neither have the plural, inflective (change in form)or possessive forms.

The word ‘Including’ does not refer to identical things

Prepositions sometimes function both as adverbs, nouns and adjectives. Prepositions can be a single word, two or three. The latter are known as phrasal prepositions and include; instead of, on behalf of, in spite of, on account of, etcetera.

On average, there are about 100 prepositions. However, there are those that we regularly use, and these include; at, in, on, for, with, to, into, by, through, towards, under, above, upon, beside, outside, below, over, around, after, about etcetera. Prepositions of time are; at, on, in, from, since, ago, before, until etcetera. They are used specifically in reference to time.

Whenever one alludes to time, which is a measured in minutes, hours, days, weeks, months or years, the appropriate preposition is 'in'. For instance; "In August 2017, Kenyans voted for their president".

"In March 2018, President Kenyatta reached an accord with erstwhile opponent Raila Odinga and a lot has changed since".  The preposition 'on' is used for days and dates. For example; "The accord between Kenyatta and Raila was reached on March 9, 2018". “Parliament does not have sessions on Fridays or over the weekend".

Where reference is to a specific time, the appropriate preposition is "at". For example; "The Judge walked into the packed courtroom at 0900 hrs on Monday".

The same prepositions; ‘on’, ‘at’, and ‘in’, can be used to point out a specific physical location, surface or a particular place. For instance, "Opposing President Yoweri Museveni in (within) Uganda is dicey business" or "Our elected leaders spend most of their time in London”. “Put the blue package on the table in the kitchen". "Let us all meet at the bus stage behind the old post office building in town".

Prepositions that are applicable in making reference to directions include; ‘to’, ‘into’, ‘towards’ and ‘through’. Examples are; "All students must move to the dining hall after the parade". “Not worried by the raging waters, the young boys waded into the river". "He did not notice that the enraged Buffalo was coming towards him until it was too late to dodge the charge".

Prepositions that express the relationship between a person doing something and the action are called prepositions for agent. These include ‘by’ and ‘with’. For example, "The government was forced to release the detained rebel leader following destructive demonstrations by his supporters ". "The house door could not be opened with the key he was given by the agent". We travel to distant places by car, bus, train or plane.

In conclusion, when two words used in parallel require the same preposition, it (preposition) should not be repeated. For example, it would be wrong to write; “You can wear the stockings in the bedroom and in the kitchen ".

Simply write; "You can wear the stockings in the bedroom and kitchen". However, where there is need to use different prepositions to make a sentence clear, ensure both are used.

Women in politics are trying to eclipse men

Attention is increasingly on women and they are claiming their space in political rough plays.

By Alexander Chagema | 11 days ago

By Alexander Chagema | 26 days ago