Corpse 'refuses' to be buried after families fight over unpaid dowry 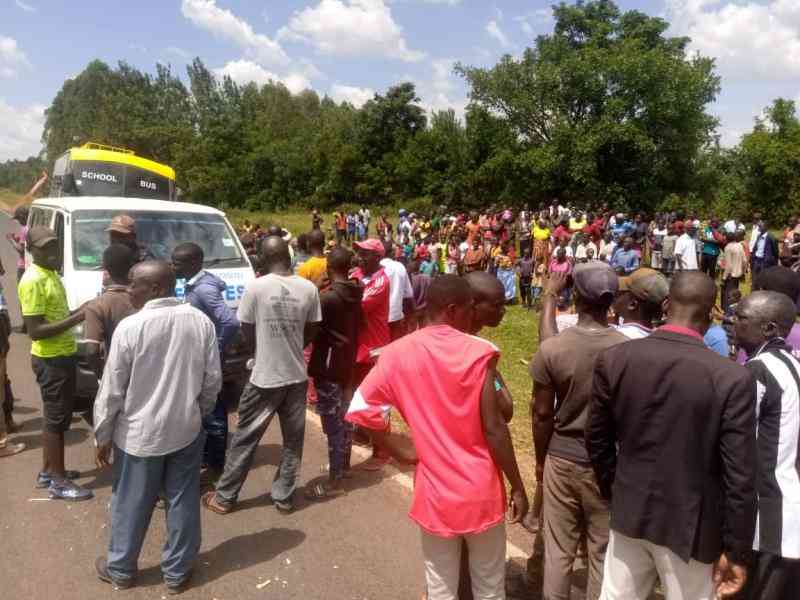 Two families from Mumias and Navakholo constituencies cut short a trip from a morgue after the body of their kin refused to be transported back to her home for burial preparations. It was around 11 am on Mumias-Kakamega highway when hell broke loose when a vehicle that was being used to transport the body of Mildred Makokha,19, from St Mary’s Mission Hospital morgue to Mkungu village in Navakholo Constituency, Kakamega county on a smooth tarmac road developed mechanical problems.
The vehicle got stuck at Kisumu Ndogo market centre in Mumias East Constituency near the deceased parents’ home while on its way to her home where she was married and was supposed to be laid to rest.

It is said that the body got stuck following a disagreement between the two families over unpaid dowry and the cause of the death and that of her unborn child.  The parents of the deceased are said to be angry with their in-laws after their daughter died due to complications brought on by her six-month pregnancy questioning where the man’s family took the dead unborn child.

According to Eunice Nanjala who was inside the car ferrying the corpse, they had just prayed at the mortuary after taking the body. Everything was well until the vehicle developed mechanical hitches just near the deceased’s parents’ home.
“We are wondering what is happening because everything was well, we cannot say it is the bad condition of the road this is pure tarmac road but based on the history and our culture, elders have to hold a conversation between the two families and the dead to get the solution and get to know what the dead wants to be done,” said Nanjala.
“We have seen the two families quarreling over unpaid dowry, the cause of the death, and where the unborn child was taken after it was reported that the mother and infant died mysteriously. Therefore, only paying dowry and agreeing on how to solve the issue of the unborn’s whereabouts is concluded when the corpse can accept to move but if not we will stay here forever.”

Her sentiments were echoed by a family member from the husband’s side who said the issue of the vehicle getting stuck was not about a mechanical issue citing the unpaid dowry and the death of the unborn child as the cause of what was happening.

Some church members who do not subscribe to traditional beliefs called a mechanic to assess the car. The mechanic gave the car a clean bill of health.
The two families were compelled to have a side discussion led by the grandfather to the deceased and elders who were seen talking to the dead and agreed that the dowry to be paid in form of cows and rituals to be conducted for the death of the unborn child and the deceased parents to be involved fully in the burial preparations.

“We felt shortchanged by our in-laws and lied to over the death of our daughter, the status of the unborn child, and whereabouts because at first we were told that it was an accident but after questioning it came out that the deceased developed complications caused by the six months pregnancy,” said the grandfather to the deceased.
However, after the two families agreed, the vehicle moved and the corpse was taken to its burial place.

By Benjamin Imende 3 7 days ago
Premium Keeping up with Senator Karen Nyamu
.