I am a politician in my own right, family name aside- Raila in-law Tabu Osewe 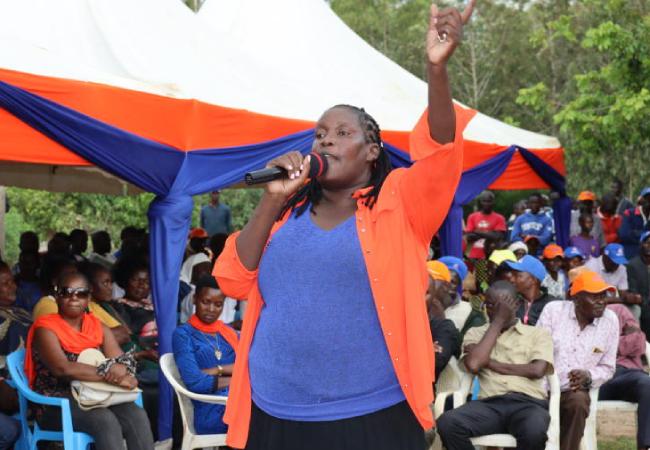 Nominated MCA Tabu Osewe has refuted claims she has been getting political favours because of her relationship with the Odinga family.

Osewe says being ODM leader Raila Odinga’s sister-in-law does not mean she is hanging onto the family name for her political ambition. Even though she indicated she has no qualms identifying as a member of the family, she worked hard to succeed in politics.

“I am a strong woman who started participating in politics even before I got married into the Odinga family,” she told The Nairobian.

Osewe unsuccessfully contested the West Sakwa MCA seat in 2013 before she was nominated to the county assembly in 2017. Her five years in the assembly have seen her grow confident and participate in community activities. She has been nominated to fly the ODM ticket for West Sakwa ward in the August 9 election.

Osewe, who does not regret being Odinga’s in-law, says she is building her own political career.

With less than four months to the general election, Odinga’s family is said to have reaped big in securing ODM tickets to contest various seats. They continue to dominate in Nyanza leadership.

Jaramogi’s eldest son Oburu Oginga was handed a direct ODM ticket to vie for the Siaya senator seat as Raila Odinga was unanimously endorsed by ODM and the larger Azimio One Kenya Alliance to vie for the presidency. Raila’s sister, Ruth Odinga, won the Orange party ticket to fly its flag in the Kisumu Woman Representative post.

Oburu’s son Elijah Bonyo was also defeated in the ODM primaries. He was seeking to contest in the Kisumu Central parliamentary seat.

According to Osewe, male politicians should stop intimidating their female counterparts.

“I urge all those who lost in the primaries to join hands and work for the people of West Sakwa,” she said.

Sudi: I only fear hunger, God and lightning, not government arrests

Outering Road is among the deadliest roads in Nairobi. Mutindwa, and the area between Donholm and Fedha are considered black spots where many lives have been lost.