Remembering Muthoni Nyanjiru and the women who helped fight colonialists 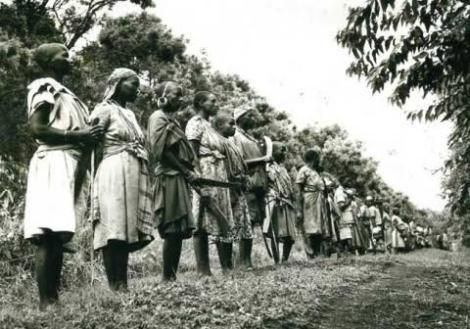 History has tended to silence the voices of women and erase the roles they played in Kenya’s freedom struggle.

A case in point is what happened on March 16, 1922 when a group of Kenyan workers gathered at the then Kingsway Police Station (now Central Police Station) to agitate for the release of one of their leaders — Harry Thuku.

Thuku had been held by the authorities for his increasing militancy and his support of women on the issues of physical and sexual abuse as well as forced labour. The colonial authorities were also getting concerned about his growing number of supporters.

As the day wore on, the crowd got increasingly agitated. At some point, a woman called Muthoni Nyanjiru leapt to her feet, lifted her dress over her head and dared the men to hand over their trousers to the women if they could not free their leader. As a result of her action, women ululated and the crowd surged forward.

The police opened fire and Muthoni Nyanjiru was among the first people killed.

After what has come to be known as Harry Thuku riots, over 100 people lay dead, though the British authorities gave the official figure as 21.

Muthoni Nyanjiru, together with other protesters, were buried and quickly forgotten. Thereafter, Harry Thuku was detained in Kismayu. In 1931, he returned and become the leader of Kikuyu Central Association, one of Kenya’s foremost African political groupings.

While the story of Harry Thuku is well told, Muthoni Nyanjiru lies buried in the dustbin of history where those whose freedom she fought for condemned her.

This past week, we marked 100 years after Muthoni Nyanjiru’s act of timeless bravery. Perhaps it is a time to ask ourselves why acts of defiance by women freedom fighters remain uncelebrated and forgotten.

Few details about Muthoni Nyanjiru exist. Her grave has never been identified, nor has there been any collective efforts to locate it. In addition, we do not have a single statue in her honour.

In the arts, the only literary piece where Muthoni gets a mention is the poem, Mother Afrika’s Matriots, by Professor Micere Mugo.

This is not the case with other male participants of our liberation movement who went on to get various accolades, despite some of them having contested legacies.

Forgetting the women who participated in the freedom struggle appears systematic when you consider others whose roles are underplayed.

In Nyanza, we had Moraa Ng’iti, the defiant Gusii heroine who provided her people with the basis on which resistance was waged against British colonialism.

After leading the Abagusii resistance against the colonial authorities, they arrested her and tortured her but she never renounced her stand.

Among the Aembu, there was Cierume the dancing warrior who led her people against foreign attacks. Cierume rose to the position of assistant chief but the men in the area worked viciously to ensure her downfall. She continued to play an active role in public matters and to date, Embu and Mbeere people look to her for inspiration.

The Ameru had Ciokaraine, the woman who protested against the colonial policy of uprooting food crops that were allegedly being used by the Mau Mau as their hiding places.

Instead, she said that the crops should be guarded, saving her people from starvation.

Granted, men may have played more leading roles in the struggle. But the role of the above women cannot be underestimated.

Their roles gain even more prominence when you consider the patriarchal structures that weighed heavily against them. Before they led their people, they had to overcome such structures.

For instance, before Muthoni Nyanjiru led the riot, she had to cut through a barricade of men, literally and figuratively.

In her book about Muthoni Kirima, one of the few women Mau Mau combatants, Prof Micere Githae Mugo calls this deliberate understatement of the role women played in the freedom struggle as ‘silencing, erasure and manipulation of female combatants’.

However, Muthoni Kirima’s role in the movement demonstrates the fact that women can have the same leadership qualities as men.

Further afield, when one examines the stories of Queen Nzinga of Angola, Nanny of Jamaica and others, the impression formed is that relegating women liberators to the shadows of history is a worldwide trend.

Toni Morrison, the celebrated American writer, emphasises the need to retell the stories of all these forgotten women who are addressed more as the product of myth and superstition.

One of the ways of celebrating women leaders is by breaking barriers that the likes of Muthoni Nyanjiru and Ciokaraine fought against. This will not only elevate women to higher positions in society but also give them the power to articulate their issues.

The second way is by retelling the stories of those gallant women in creative ways.

The stories of Harriet Tubman the American abolitionist and Pocahontas the Native American girl are already immortalised in film and animation. There is no reason why our heroines can’t be reimagined in such media so as to bring their activities to the fore.

As we mark 100 years after Muthoni Nyanjiru’s act of timeless defiance, we should also endeavour to honour her so that the blood she shed for this country is not in vain.

This, in a way, will slowly end the history of ‘erasure and silencing’ of our heroines, past and present.

— The writer is the author of Nobody’s Darling, a historical fiction novel that re-imagines Muthoni Nyanjiru which will be launched on March 19, 2022 at the Kenya Cultural Centre.

Prof Walter Jaoko from the institution told male students to keep off women, and to drop the flimsy excuse that some dress provocatively.

In an inquest into the death of GNK, one Paul Kagwa Kawanja was the accused after he allegedly beat GNK in self-defence after GNK attacked him.