Kenyans on Twitter rescue another pregnant women turned away from hospitals 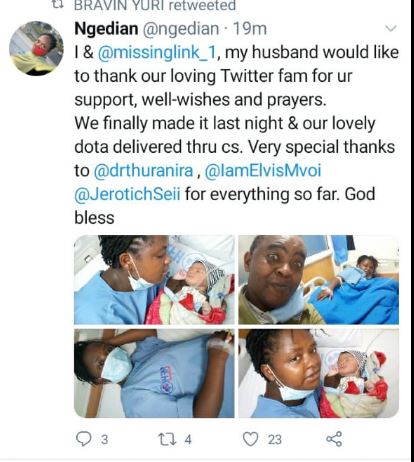 Barely days after Kenyans went up in arms when an expectant woman delivered at the gates of Nairobi County’s Pumwani Hospital, a young couple were lucky to have a safe birth thanks to Kenyans On Twitter (KOT).

The woman identified as @missinglink_1, had tweeted that she was in pain and, “desperately looking for a facility to have a CS. My baby is four days overdue...”

She opted for social media attention after two city hospitals allegedly turned her away due to congestion.

Her alarming tweet immediately caught the attention of Former Kiambu Governor William Kabogo and a popular media personality who retweeted.

Ruai Family Hospital also known as RFH Healthcare picked up the case, transferred the couple and helped them deliver a healthy baby girl.

Dr Maxwell Okoth from RFH says the mother was in potential danger as four days after projected due date would lead to complications including still birth.

“Despite being a Linda Mama card holder, we helped deliver a baby girl at zero cost and we'll continue providing healthcare as she nurses," he said.

Previous article
I almost gave up on my music in 2017 - Gospel singer Guardian Angel
Next article
I am sorry for killing nun, says Catholic priest jailed for two years