Son in court for burning to ashes mother's Sh1.3 million house over food 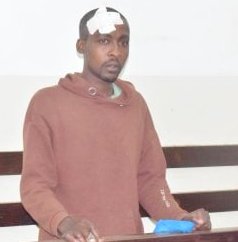 A man from Nairobi’s Dagoretti area has denied burning his mother's house to ashes over food.

Joseph Njuguna, 27, pleaded not guilty to locking his mother in her Sh1.3 million house and setting it on fire.

“Joseph set his mother’s house on fire whose value was Sh1.3 million on November 6 within Nairobi’s Dagoretti area,” read the chargesheet in part.

Court was told that Joseph went home drunk and found his mother preparing supper. It is reported that Njuguna walked out in protest, threatened to teach his mother a lesson because he was hungry and the food was taking too long.

Moments later, Njuguna’s mother realised that she was trapped inside her house which had gone up in flames. Luckily, neighbours heard her frantic calls for help and she was rescued. Unfortunately, the house and all household items were gutted by fire to ash. Nothing was salvaged.

Joseph, who had fled to his friend’s house was flushed out and attacked by angry neighbours. Surprisingly, the same mother he had locked inside the burning house, was able to rescue him from the angry mob who were threatening to lynch him.

After all these, Njuguna’s mother took him to hospital before he was arrested. Following comprehensive investigations, he was taken to court before senior principal Magistrate Esther Bhoke who granted him a bond of Sh500,000 pending mention on November 22.

Mudavadi's ANC: We are single and ready to mingle

We are very open, we are talking to everyone including our partners in OKA,” said Simon Gikuru, ANC Secretary General

He has been the acting VC at University and has worked as the DVC in charge of academics and students affairs at Kibabii University.