Haven fresh air. Towering green trees stand side by side majestically with a bewitching canopy. Healthy-looking cows grazing peacefully along the impressively green grass. Streams of fresh water flowing calmly. This is the soothing atmosphere that welcomes you to the 92,000ha Kirisia Forest in Samburu County.

The landscape of Samburu is mostly arid and semi-arid, dotted with indigenous forests and woodlands on hilltops and plateaus. But the Kirisia Forest's allure is a stark difference from the rest of the county which like other Asals counties is dotted with dying vegetation, and parched and barren land courtesy of the drought linked to climate change. But things have not always been this good in Kirisia Forest which is the only source of reliable water for the nearly 150,000 people living in the area, a rich array of wildlife, including elephants, zebras, and Masai giraffes.

Fresh from receiving the achievement award from the Food and Agriculture Organisation of the United Nations (FAO) in Rome for his role in the restoration of the forest, Mr Douglas Leboyare, Kirisia Forest Association chairman, walks The Smart Harvest team on the journey from degradation to restoration.

“Things have not always been this clean and orderly in the forest. It has been a journey of painful sacrifices that has now paid off. Now our animals have water and pasture all year round. The wild animals also have pasture and water and this has in turn reduced the human-wildlife conflict that was common in this area,” says Leboyare.

The forest now has enough pasture even the pastoralists in Baringo and Laikipia are allowed to graze their animals as long as they seek permission from the elders in Samburu.

A few years ago, the situation in the forest was terrible because of massive deforestation by the local community, Leboyare says.

More than 5,000 locals had encroached on the forest, locally known as Loreghi, and were doing all manner of activity that degraded the forests and soils.

“My family and I were also living in the forest. In order to eke out a living we were cutting down the trees mercilessly to burn charcoal, we were growing food crops, grazing our livestock and using the streams of water for irrigation and domestic use. The wild animals were also depending on the same resource for water and pasture,” the chair says.

The aftermath of this massive deforestation and destruction? Degraded, deforested lands were more exposed to large-scale soil erosion, with siltation from such erosion leading to environmental disasters such as the ongoing flooding of the Rift Valley lakes.

Soil erosion also led to the pollution of freshwater supplies in lowland areas. To worsen the situation, the destruction of forest ecosystems contributed to a significant loss in biodiversity, destroying important stores of atmospheric carbon.

Compound all this with climate change that brought drought and the problem was catastrophic. According to Kenya Forest Service “... 30,000ha of Kirisia Forest has been destroyed, representing 30 per cent of its gazetted [officially recorded] size.”

According to an article published in the Yale Environment 360, from 1973 to 2015, Kirisia forest lost 21 per cent of its tree cover, with the biggest losses being indigenous species like rare sandalwood and red cedar, which is hugely popular for firewood and building materials.

“The situation was so bad, the land was so degraded that it could not give us food, our livestock had no pasture and water and this pushed us to start crossing to neighbouring counties like Laikipia and Baringo in search for pasture,” he recalls. Then the butchering started.

“In a bid to protect their water and pastures, our neighbours would kill our pastoralists whenever they crossed into their lands. We buried so many pastoralists. Lions and elephants also started attacking locals who crossed their path,” Leboyare recalls with pain.

The evidence was all around. But the locals did not need any damning statistics on climate and forest cover to know that times were changing the Samburu’s traditional nomadic ways were damaging to the environment and were unsustainable.

Luckily, the elders realised that something had to give otherwise they would all perish with their animals.

Under their leadership and wise counsel, they explained to the community the urgent need to vacate the forest to allow it to regenerate and heal. After much sensitisation in village barazas the locals made the bold and radical move and vacate the forest voluntarily.

In a country where locals living around forests are so rooted in it and must be uprooted by force by armed Kenya Forest Service Warders, the Samburu decision was an extraordinary move.

“No Government official believed that we would leave this place of our own volition but it happened. I will never forget that day. It was on December 20th, 2020 when the first exodus started to leave the forest. We demolished our houses, packed all our earthly belongings and made the epic exodus out of the forest after years. Elders led the way, followed by the morans and the women and children. It was such a moving scene,” the chair recalls with nostalgia.

And they have never looked back.

“Everybody was shocked that a community that was living in the forest and was so dependent on it could leave without being forced to. You see the Kenya Forest Service team used to try to hound us out but we stay put. The relationship with wardens was so bad when the children used to spot them they would flee screaming and alert their parents to hide. Now we are friends and we are helping them take care of the forest,” says Leboyare jokingly.

Like everybody else, the Government was impressed that the community saw the need to relocate voluntarily.

“It is impressive that the locals voluntarily moved out of the forest after they saw the damage that was happening. Under the Participatory Forest Management Programme, they are now assisting us to take care of the forest without living inside it. It is quite commendable,” said the principal conservator of forests-head biodiversity Kenya Forest Service James Mwang’ombe when a team of stakeholders visited the area.

The Food and Agriculture Organisation of the United Nations (FAO) representative to Kenya Carla Mucavi lauded the group for their bold step and conservation efforts.

“This is historic. The community has demonstrated to the world that forest restoration can be done. Thanks to their decision to move out and allow the forest to regenerate on its own, now they have pasture and water for their animals and wildlife. This is a great story that should be shared at the COP27 summit in Egypt. You have shown the world that it is possible to adapt to climate change,” says Ms Mucavi.

COP 27 is a global UN annual climate summit which will this year take place in Sharm El Sheikh, Egypt from tomorrow November 6 to 18. Here, world leaders will be meeting to limit global — greenhouse gas emissions that are linked to the intense drought that has ravaged most parts of Kenya.

To support the Kirisia community conservation efforts the Ministry of Environment and Forestry stepped in.

“This is not a mean feat. That is why as government we rallied behind them to support this conservation initiative. The community has demonstrated that it is possible to achieve voluntary methods to move out of the forest and form forest associations to help the government protect and conserve the forest. That is why we are supporting them through the Global Environment Facility (GEF),” said Agnes Yobterik, the Director of Projects at the Ministry of Environment and Forestry.

Ms Yobterik noted the Kirisia community conservation approach was a model that should be replicated in other water towers in Kenya.

"This is something that will be upscaled because of the level of success we have seen," said the State official.

Kenya Water Towers Agency Director Susan Boit said it was commendable that a community has taken a lead effort in forest conservations and they are paying off.

"You have demonstrated that a community can take ownership of a forest in a responsible manner. The water tower is now stable, your animals have pasture, the springs are flowing and calm and peace has been restored," Ms Boit said.

Samburu Deputy governor Gabriel Lenengwesi lauded his community and urged the development partners to scale up the forest conservation project and replicate the model in other parts of the country.

Following Kirisia's success, a number of stakeholders stepped in to support local community engagement in the rehabilitation and conservation of the forest reserve through awareness and purposive sensitisation programmes.

The forestry Society of Kenya undertook a project that involved the establishment of three tree nurseries that are community-driven and community-owned through the local Community Forest Associations within Kirisia Forest.

This was supported by Global Environment Facility through FAO and in collaboration with Kenya Forest Service, Kenya Forestry Research Institute, and Samburu county government. 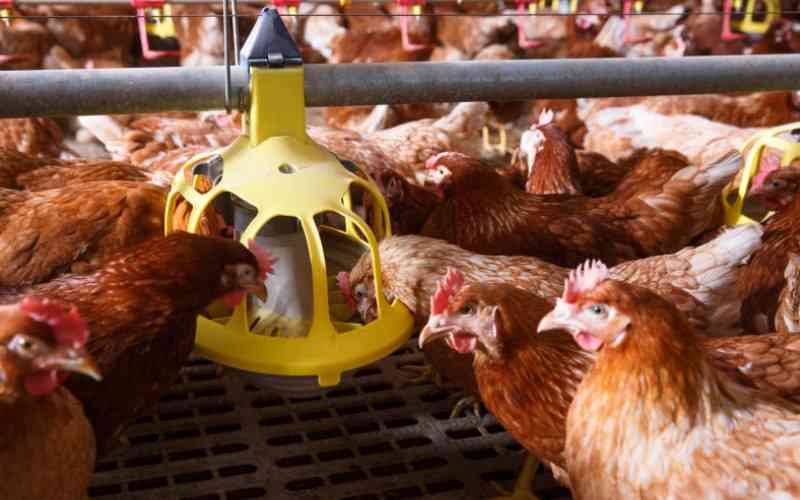 Here's how to make your chicken feeds
For you to make your own feed, you must judiciously select raw materials or feed ingredients
Livestock
By Dr Paul Kang’ethe
Nov. 05, 2022

How technology can boost dairy farming Smart agriculture
The technology comes at a cost but it has handsome returns on investment.
Technology
By Dr Paul Kang’ethe
Jan. 27, 2023
.