Pauline Otila jokingly calls herself the queen bee and by the end of the interview, we christen her the same. Although her colony of workers is not in its thousands— and they are not all female —it is a beehive of activity at Apiculture Venture Limited.

Since she started it in 2018, she has built homes for bees, harvested honey from them and made numerous products from her buzzy little friends. She loves them; seats in her office boast bee-themed covers and, on her bosom, she wears a silver bee sculpture.

The treasurer of Apiculture Platform in Kenya even has a museum in her premises, where she keeps a collection of old and new methods of beekeeping and honey harvesting, with an aim to encourage students, organisations and farmers to develop an interest in the bee keeping.

Ms Otila worked at a bee-keeping company for 16 years, identifying gaps she felt were not addressed, including honey processing and access to markets for farmers. She was in charge of administration and operations.

One industrial visit with the company had earlier opened her eyes to opportunity.

“In 2013, the company that I was working for sent me to Israel and I thought it (bee keeping) was something I could do back home because I visited a number of women who did it, and they were a bit elderly but doing it in a very professional way. I thought, ‘I am young, why can’t I go back home and start it?’”

She came back home and started it.

Initially, her aim was to provide a market to beekeepers.

“But I realised working with them is not easy; today they promise you this amount (of honey); tomorrow you go and it is not ready. I decided to start with my own beehives, installing them in farms and making my own honey,” she says.

One after another, people in need of beehives approached her.

Ms Otila says she could not find enough land. The women she had mainly aimed to assist faced this challenge as well. Many communities disinherit daughters and thus many women had poor access to land.

“I thought of an idea: why not lease idle land; people in the diaspora mostly buy land they do not use for a period of up to 10 years so why not lease this and keep beehives. The first piece of land I leased was in Isinya. It is operational to this day. I have since leased land in different parts of the country: Juja, Garissa, Eldoret, Bondo (Usenge), Bissil, Emali,” she says.

Individuals, then organisations that wanted to support beekeepers, became her customers.

Ms Otila’s company deals with two beehives— the Kenyatop bar, which retails at Sh4, 800 and the Langstroth, which costs Sh5,000. She has over 1, 100 of these hives in the different pieces of land she has leased. She sold over 5, 000 beehives in 2021. The two types of hives are successors of the pot hive, the basket hive and the very common log hive.

The Bachelor of Commerce graduate, who also has a Masters in Strategic Management, explains that her company, with 17 employees, is able to make between 150 and 200 hives in a week.

In the workshop, timber is cut into pieces that make boxes, frames onto which beeswax is attached fabricated, and wax, which comes in blocks, is melted with steam after which liquid wax is sieved, soaked to soften, rolled to emboss the final pattern that resembles a honeycomb and then cut into sizes and fitted into a frame.

The Langstroth hive, the most modern, is made up of two boxes, the brooder box, the lower one in which the queen bee lives and lays eggs, and the upper box, the super box. A wiremesh, the queen excluder, with gaps very small to keep the queen bee from crossing into the super box, where she could lay eggs, separates the two boxes.

An iron-sheet lid covers the hive to prevent water from entering the hive, while a plywood lining prevents the hive from retaining too much heat. Both the super box and the brooder box have frames with beeswax.

During harvesting, new frames, fitted with wax, are fitted in the super box. The ones with honey are removed and taken for processing. A machine extracts the honey without mashing the beeswax, and the honey is then heated indirectly and, if need be, filtered and then packed.

Ms Otila also makes a variety of products, including lip balm, jelly and chocolate and is looking for investors so she can increase volumes for these products.

A kilo of honey goes for Sh1,000 for the retail market and Sh850 wholesale. Creamed honey, churned till it is white, costs Sh2,000 a kilo. Ms Otila’s honey is called Golden Bee Honey.

She offers training to visiting learners for Sh2,500 per person for eight hours.

“I am trying to make it affordable for people,” she says.

Ms Otila says before leasing land, she has to consider security of her equipment, space (to accommodate 100 hives plus for economic viability), accessibility, topography (when hive is full, carrying contents uphill could be hard; if it rains does area get flooded), vegetation (bees depend on nectar to make honey and on pollen to feed young ones) and water (80 per cent of honey is water).

“I do testing with catcher boxes. After identifying a suitable place, I get the background of that area and leave my catcher box for three weeks, or a month. That will tell me if I should move in. I consider what type of activity is going around, whether, for example, there is a lot of spraying. If convinced, I transfer bees from the catcher box to the hive,” she says.

Ms Otila also leases out hives to people seeking pollination services, which she says have grown in this country.

“Most of the customers are individuals who are not interested in beekeeping but in pollination. Up to about 80 per cent of crops need to be pollinated by bees. Hass avocado, sunflower, canolas, strawberries, watermelons, need this,” she says. Big companies mostly buy the beehives.

For leasers, she charges between Sh100 to Sh150 per day, depending on the place.

When she started, Ms Otila needed her husband’s financial help, and land on which to put up her hives. She started with a budget of Sh4 million and with ten hives.

Grants and low interest loans have come to help boost the business, and she encourages women to go for these grants and loans.

“Some organisations do promotion on beekeeping and pay for the stand, or accommodation. These ones also help in business growth, albeit indirectly,” she says.

She decries what she feels is little government support for beekeepers, and little awareness.

With honey one of the most adulterated products on earth, Ms Otila has to deal with clients who are disenfranchised when the colour of their honey is a little too dark, or when their honey crystallises.

“Good honey will crystallise. People say manufacturers added sugar. A kilo of sugar is expensive so who would take an expensive product to damage a good product? Those who adulterate honey are looking to increase their margins and will use molasses, or bananas,” she says. 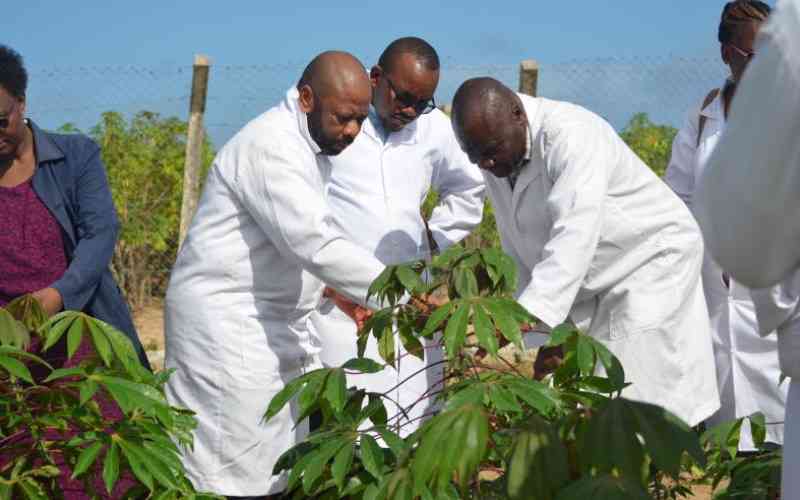 How technology can boost dairy farming Smart agriculture
The technology comes at a cost but it has handsome returns on investment.
Technology
By Benard Lusigi
Jan. 27, 2023
.