How to grow healthy beans and manage gas 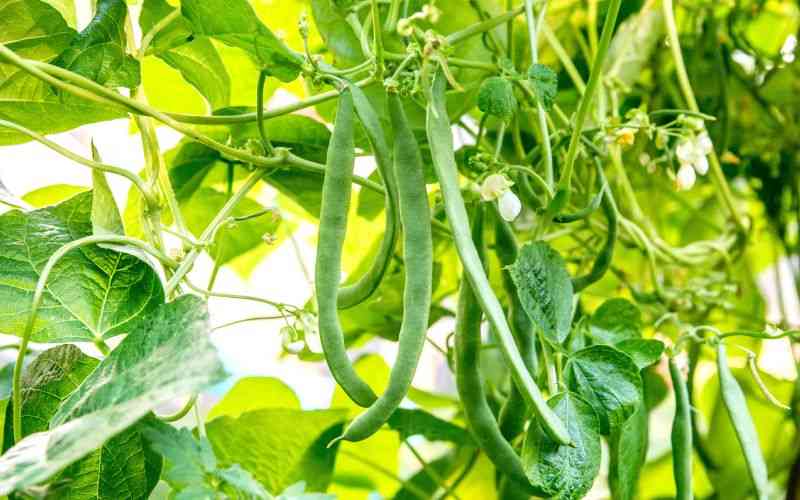 Bean (Phaseolus vulgaris) is the world’s most important legume for human consumption, according to experts.

Beans are an affordable and easily accessible source of protein which makes it a favourite for many Kenyan families.

There are numerous bean varieties. Between 2008 and 2018 around 33 new varieties were released by research institutions like Kenya Agriculture and Livestock Research Organisation (Kalro), Egerton University and Kenya Seed Company.

Bean consumption behaviour also varies from place to place. Some communities consume the leaves as vegetables while others eat green beans like in the case of French and runner beans and the most common is the dry grain.

The bean left over stover/stalks is also an excellent fodder for livestock and some communities burn it to make food additives called “munyu” by the Luhya community.

According to Njenga, a large scale bean farmer from Bomet, the recommended seed rate is 40 to 50kg/ha, which translates to 16 to 30kg per acre.

During planting, farmers are expected to observe the number of seeds per hill.

“Sow at least two seeds per hill. The depth of planting is four to five centimetres. Do not plant beyond five centimetres as the shoot may have trouble emerging, resulting in crop failure,” says Njenga.

Bean spacing is influenced by a number of factors like variety and type of cropping system adopted.

One can be growing beans for green bean production that is French beans or beans for dry grain.

Njenga says: “You can also adopt different cropping systems like mono-cropping or intercropping. When grown as the only sole crop, the spacing is 50cm by 10cm a bean."

Before deciding on any crop nutrition activity for your bean crop, it is always advisable to do soil analysis.

This is because beans have the ability to fix nitrogen in the soil hence the need to follow the write crop nutrition guidelines.

During planting, use well decomposed manure and DAP.

“Up to 50 per cent crop losses can occur due to uncontrolled weeds. The first weeding should be done two weeks after emergence of the plants,” says Njenga.

“Weed early before weeds grow big and compete with your bean crop. Second weeding should be done before flowering,” he says.

Diseases to watch out for in beans

Beans are sensitive to pests and diseases and Njenga recommends that you take good care of them during all the stages.

“Practise weekly scouting in your bean crop to assess performance and identify any pests or disease early enough.”

It is caused by a fungus which attacks the leaves, stems and pods of bean plants.

Symptoms include twisted, buckled, or distorted leaves with a whitish substance.

Apply sulphur-based fungicides as preventive rather than going curative measure.

Njenga advices farmers to start the crop on well moisture fertilised soil for crop to be strong. Do not carry out overhead irrigation. Do not grow crop under shades.

Challenges aside, if you do it well, you can make money from growing beans.

The market for beans is overwhelming, and depending on the quality and type, the prices per 90kg bag of beans range between Sh7,000 and Sh12,000.

The price is dynamic and influenced by seasons and varieties. Some varieties which are not grown by many farmers can fetch a higher price due to the difference in demand and supply.

Beans is a much loved food because of its affordability and many health benefits. Here are some of them.

Protein is a vital nutrient that plays a key role in maintaining and repairing the body. Beans are high in amino acids, the building blocks of protein.

According to medicalnewstoday.com, beans are also lower in calories and saturated fat than some other protein sources, such as meat and full fat or low fat dairy products.

People who consume beans regularly may be less likely to die of a heart attack or other cardiovascular issues. The authors of a 2017 meta-analysis suggested that one reason for the decrease in cardiovascular risk was that people had replaced higher fat animal meat proteins with beans.

Other research suggests that nutrients in beans may help lower cholesterol. High cholesterol is a risk factor for heart disease and heart attacks.

Some studies have shown that beans act as antioxidants and anti-inflammatory agents. These effects could reduce the risk of cancer.

Research published in 2015 analysed whether beans might have antioxidant properties that fight intestinal cancer. The results showed that black beans had the highest antioxidant activity.

How to manage gas

One of the reasons many people avoid beans is the annoying gas that it triggers in the tummy. To avoid that, some nutrition experts recommend that when boiling the beans throw in a well washed carrot skin into the water and this will absorb the gas efficiently. When the beans are fully cooked and soft take out the carrot and discard.

CBC: Nurturing young minds on agri-business
The young minds are intrigued by the whole germination, nurturing and harvesting process to the entrepreneurship bit of farming.
Smart Harvest
By Dr George Mbakahya
Sep. 26, 2022

Why you should try superior goat Milk
Research has shown that keeping dairy goats alongside cows improves the health of children
Livestock
By Dr George Mbakahya
16 hours ago
.