Crop
By Njoki Thuo | 1 month ago

Common bean (Phaseolus vulgaris L.) is the world’s most important legume for human consumption, according to Katungi et al 2010. Beans are a source of proteins which makes the Kenyan population depend highly on them. The market for beans is overwhelming, and depending on the quality and type of beans, the prices per 90kg bag of beans range between Sh7,000 and Sh12,000. The price is dynamic and influenced by seasons and varieties. Some varieties which are not grown by many farmers, can fetch a higher price due to the difference in demand and supply.

There are numerous bean varieties. Between 2008 and 2018 around 33 new varieties were released through research organisations like Kenya Agriculture and Livestock Research Organisation (Kalro), Egerton University and Kenya Seed Company.

“How many of these new varieties are known by change agents and farmers?” Mr Karanja poses. His question indicates that there is a great need to educate farmers on the new varieties for them to adopt climate-smart and resilient agriculture. Some of the 33 new bean varieties include Angaza, Faida and Nyota.

Bean consumption behaviour also varies from place to place. Some communities consume the leaves as vegetables, others eat green beans like in the case of French and runner beans and the most common is the dry grain. The bean leftover stover/stalks is also excellent fodder for livestock and some communities burn them to make food additives called munyu by the Luhya community.

Farmers must start by planting good quality seeds for good crop establishment. The seed sourced should have the following characteristics:

The recommended seed rate is 40-50kg/ha, which translates to 16 to 30kg per acre. During planting, farmers are expected to observe the number of seeds per hill. Sow at least two seeds per hill. The depth of planting is four to five centimetres. Do not plant beyond five centimetres as the shoot may have trouble emerging, resulting in crop failure.

Bean spacing is influenced by a number of factors like the variety and type of cropping system adopted. One can be growing beans for green bean production that French beans or beans for dry grain. You can also adopt different cropping systems like mono-cropping or intercropping. When grown as the only sole crop, the spacing is 50cm by 10cm a bean. Banana intercrop has a spacing of 45cm by 20cm. Different intercrops have different spacing.

Before deciding on any crop nutrition activity for your bean crop, it is always advisable to do soil analysis. This is because beans have the ability to fix nitrogen in the soil hence the need to follow the right crop nutrition guidelines. During planting, use well-decomposed manure and DAP. DAP helps in root formation which is key for the bean crop. Consider topdressing before the crop flowers. After flowering no activity should take place till the pods form to avoid flower fall.

Up to 50 per cent crop losses can occur due to uncontrolled weeds. The first weeding should be done two weeks after emergence. Weed early before weeds grow big and compete with your bean crop. Second weeding should be done before flowering. After flowering do not weed but hand pull weeds as necessary to prevent flower abortion and disease attack.

Beans are sensitive to pests and diseases and can easily be wiped out if not properly taken care of no matter the growth stage. It is therefore recommended that you take care of the beans through all the stages. Practise weekly scouting in your bean crop to assess performance and identify any pests or disease. This helps you to identify the incidences of pests and diseases early for timely management. This is before economic injury levels are attained. Economic injury levels are levels of infestation or infection which do not make any business sense to apply any control or management methods, the crop will have been lost. Always select preventative care and measures over reactive. Early intervention will save your bean crop investment.

Anthracnose is a fungal disease mainly spread via infected seeds. Once crop is attacked by diseases, the symptoms show on stem, leaves and pods. Control is difficult. Don’t use seed from infected plants. Use clean certified seeds.

Symptoms manifest as an irregular mosaic pattern of light yellow and green or a band of dark green along the veins on an otherwise green leaf. Foliage may pucker and warp in size, often causing the leaf to roll up. Grow tolerant varieties from certified seeds. Control aphids if the variety grown is not tolerant.

Fusarium causative fungus thrives best in warm temperatures. Solarisation kills off the fungus by raising temperature up to an extreme heat level where no fungus can survive. Plant tolerant varieties. Practice crop rotation (and not with Irish potatoes) and treat planting seed with a fungicide like Apron Star and Murtano.

It is caused by a fungus which attacks the leaves, stems and pods of bean plants. Rust spots have red-brown powdery substance. If not controlled in good time, excessive infection eventually leads to death of plant or plant parts, causing huge losses. Plant resistant varieties. Rotate with non-host plants like cereals.

Symptoms include twisted, buckled, or distorted leaves with a whitish substance. Apply Sulphur-based fungicides as preventive rather than going curative. Start the crop on well moisture fertilised soil for crop to be strong. Do not carry out overhead irrigation. Do not grow crop under shades.

Remove weeds which hide the pests, maintain field hygiene after weeding and use of chemicals.

Most of the pod borers are damaging at caterpillar stage, like bollworm larva, Heliothis larva. Always destroy plant debris of previous crop by either using it in a compost pit or as animal feed. This ensure that the eggs laid there will not go on to the next growth cycle. Use plant-derived products, such as neem, derris, pyrethrum and chilli (with the addition of soap).

Plant sucking bugs occur from vegetative to early podding stage. The pests can be controlled by planting repellent plants such as parsley “dhania” and onions within bean plants.

Synthetic pyrethroids are effective, but will also kill natural enemies. Use plant-derived products like in pod borers.

When using chemicals, do not repeatedly use one type of insecticide to avoid resistance. Do NOT mix insecticides and foliar fertilisers in one spray tank. 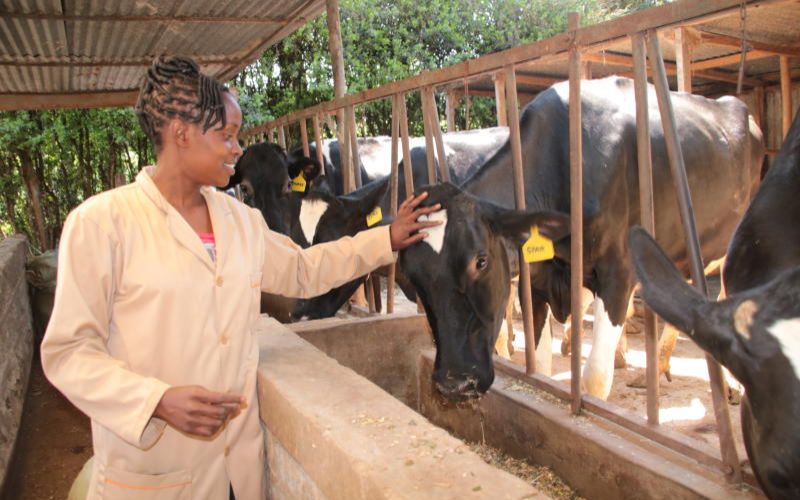 Agriculture is a profitable venture, but youth won't bother unless it's made fun
‘Youth in agriculture’ is one of today’s hot topics – it seems like every development agency and initiative has activities that address this issue
OPEDS
By Edwin Wanjawa
1 month ago