Milk fever signs and treatment, a threat to dairy business

Last weekend I travelled upcountry to visit my folks. It happened that “Esther” one of our dairy cows was about to give birth. We kept vigil to keep Esther company and offer assistance in case she needed help. In the wee hours of Friday morning she dropped twin female calves with ease. My mother ululated. Being the third lactation, Esther has been giving birth to bulls but this time she decided to surprise us. However, there was a twist, she lost appetite, was weak, unable to stand and was shuffling the hind feet after birth.

My folks were worried when I told them she had milk fever. I assured them it shall be well. Fortunately, they had sent yours truly to the University to study Veterinary Medicine. This was my time to show the worth of the fees they paid.

What is milk fever?

About 80 per cent of cases occur within one day of calving because milk and colostrum production drain calcium from the blood and a good proportion cows are unable to replace the calcium quickly enough into the system.

High producers, like Esther whose production was averaging 28 liters daily on her previous lactation, are more susceptible because the fall in their blood calcium level is greater. This condition is not however not contagious.

How does milk fever develop?

Cows that are high producers have a higher risk of hypocalcemia since the fall in their blood calcium level is greater. They may not be able to replenish the large volumes of calcium reserves that drain into the milk.

Three to four days before calving the levels of calcium and inorganic phosphorus in the blood serum tend to drop. This drop in calcium is a consequence of the start of milk production, whereas the drop in phosphorus is a direct result of calving itself.

A highly alkaline environment hinders mobilization of calcium from the bones and absorption of calcium in the intestines. The imbalance increases the cow’s risk to milk fever.

Cows that get milk fever before parturition are attributed to the rapid fetal growth, which demands a lot of calcium. A calf grows 50 per cent during last trimester. If the cow cannot replenish the minerals through the feeds, she will have milk fever.

Age is also an important factor. Older cows increase in susceptibility up to the fifth or six calving because they produce more milk and are less able to replace blood calcium quickly.

Hypocalcemia is often accompanied by reduced phosphate levels in the body also known as hypophosphatemia, and elevated magnesium levels, hypermagnesemia although milk fever may also be caused by a low magnesium intake (hypomagnesemia).

What are the signs of milk fever?

When you closely observe your cow around the calving period you may be able to catch some signs that point to milk fever. Signs observed during this stage include loss of appetite, weakness, weight shifting, excitability, nervousness, hypersensitivity, and shuffling of the hind feet.

The first symptom is an unsteady gait. You may notice this during the day. Soon after the cow lies down, and if you feel her ears and feet, they will be cold.

If the cow is on her feet, early symptoms include paddling with the hind feet and swaying as if she is about to fall over. Once down, she will twist her head and neck to the side as if there were a kink in her neck. Her nose becomes dry.

Another warning signal is if your cow, which was bright and active caring for her newborn calf or calves, becomes restless and inattentive. This could be a symptom of any malaise, but at this particular moment in your cow’s life, suspect milk fever.

If she is not attended to, the symptoms increase in severity until the cow goes down, she begins to go cold. You can feel the ears, legs, and other extremities becoming cold first. Her head remains pulled around, and her pulse rate slows. She no longer recognizes you. All rumen activity ceases otherwise known as rumen atony. After several hours, she will be unable to hold her head up and will fall over flat, gasping for air.

She may turn its head into its flank or may extend its head. In typical cases, cows show some initial excitement or agitation and a tremor in muscles of the head and limbs. Her nose becomes dry.

In advanced cases, they then stagger and the temperature falls below normal, especially in cold, wet, windy weather. Next, they go down to a “sitting” position, often with a ‘kink’ in her neck, and finally lie flat on their side.

A dry muzzle, staring eyes, cold legs and ears, constipation and drowsiness are seen after going down. The heartbeat becomes weaker and faster. These signs are due mainly to lowered blood calcium levels.

Sometimes there are additional signs due to complicating factors. Bloat is common in cows unable to “sit up” because the gas in the rumen is unable to escape. Pneumonia and exposure may affect cows left out in bad weather. If left untreated, there is circulatory collapse, coma, and death.

The signs of milk fever can be classified into three stages:

The cow may appear excited with stiffening of the muscles and trembling. This usually goes unnoticed. Reluctance to move or eat; hind limbs may become stiff and the animal may stagger.

In this stage, the cow will be found lying or sitting down and cannot get up. Most often than not she has a ‘kink’ in her neck or her head folded along her flank. She is also dull, cold to touch, low body temperature, heavy breathing, and increased heart rate. The cow has difficulties producing manure and urine.

At this advanced stage, the affected cows are often unresponsive and almost in an unconscious state. The poor animal will lay on her side with legs stretched out; bloat often develops and regurgitation is likely. Most animals will die if left untreated in this stage.

What are the risks and cost of milk fever?

Over the years, milk fever has been associated with higher risk of mastitis, dystocia, retained placenta, prolapse of the uterus and displaced abomasum.

The overall effects of milk fever on animal health and production can be substantial in a herd. So, prevention of hypocalcemia is extremely crucial not only for animal health but also for the profitability of dairy farms.

What is the treatment of milk fever?

If prevention for milk fever failed, treatment is absolutely necessary. Without treatment 60 to 70 per cent of the affected cows will die.

Once you suspect milk fever, call your veterinarian immediately and tell them about the signs you have observed. This should be addressed as an emergency

If the cow is found to be lying on her side she should be immediately propped on to her chest, otherwise she is liable to get bloat or inhale stomach content with the attendant risk of developing aspiration pneumonia. Often, turn her so that she is lying on the side opposite to the one on which she was found and turn every 2 hours.

The veterinarian should administer a calcium product as soon as is possible intravenously and some volume by subcutaneous injection. Ensure the solution is warmed to body temperature in cold weather. These sites should be massaged to disperse the solution. Cows respond to this treatment by belching, snapping and opening her eyelids, breathing deeply, passing dung and sitting up.

Upon giving the calcium injection to Esther, she slowly stood up and passed dung. My folks were elated and ululations ran in the air.

The calf should be removed and the cow not milked for 24 hours. On day two milk half the estimated volume from each quarter and feed this to the calf. On day three milk normally. If the calf is allowed unrestrained access to the cow or if unrestrained milking is carried out the cow may well go down again.

The legs should also be massaged if she has been lying down for long. Also protect her from exposed weather conditions such as rain, sun and wind by placing her in a shaded area that is dry.

How to prevent milk fever?

A strategy to prevent milk fever in a herd will depend on herd-specific circumstances such as the attitude and skills of the farmer and the facilities available in the production system.

Prevention of metabolic disease at calving should form an important part of an integrated herd health plan for the farm. Do not breed from cows with a history of recurrent milk fever.

Prevent animals from becoming over fat. Cows should calve at body condition score (BCS) 2.5 - 3 and ensure they get plenty of exercises.

Make sure that the diet is sufficient in magnesium for cows in late pregnancy. Avoid stress in cows. Feed adequate fiber to transition cows. Ensure that the calcium intake during the dry period is below 50 grams per day. Give rations low in calcium and (relatively) higher in phosphorus during the dry period of the cow. In this way, the calcium metabolism will be activated. At calving, the parathyroid gland will be better prepared to mobilize calcium from the bones, and calcium from ration and supplements will be better absorbed.

Ensure that adequate dietary calcium is available over the risk period especially prior to and after calving. Moreover, try to avoid diets high in strong cations, such as sodium and potassium.

Supplementation of a rapid-action calcium supplement in the 24 hours before and after calving. Many commercial products are available in different forms: liquid, gel, paste, and bolus. They also serve as a therapy for the prevention of milk fever relapses.

Milk fever is a production disease, meaning that as milk production increases the prevalence and severity of milk fever generally increases as well. Selecting cows for high production may, therefore, increase the problem with milk fever. Fat cows are at a greater risk than thin cows. This is partly because their feed and calcium intake has been higher and partly because fat cows produce more milk at calving time. Some cows get milk fever several days or even weeks before or after calving. This is usually due to the feed, especially the dietary calcium, being insufficient to meet the heavy demand due to the rapidly growing fetus or milk production in early lactation. In early lactation, cows should receive as much calcium as possible.

Milk fever increases the risk of other metabolic diseases and infections, such as ketosis and metritis, and approximately 5 per cent of downer cows do not recover. 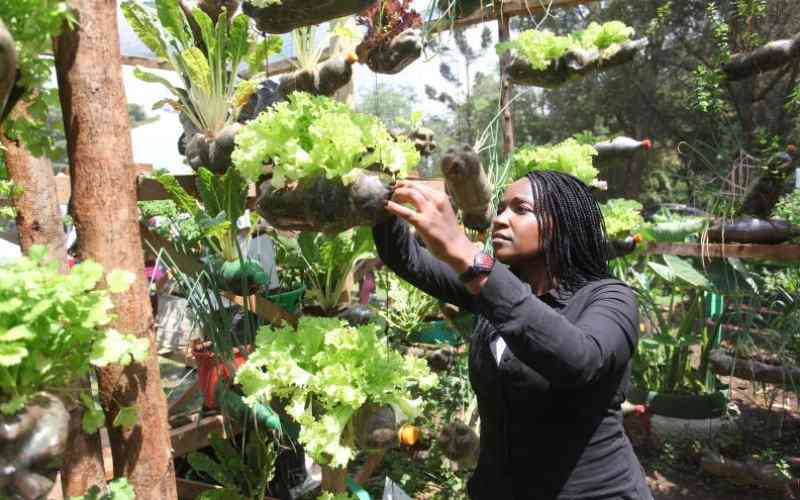 Six crops you can plant in buckets
I will share tips on how you can grow various crops in buckets.
Crop
By Dr Watson Messo
Nov. 01, 2022