Farmers in West Pokot are now growing grafted mangoes in a bid to cope with harsh effects of climate change and boost their incomes.

“Fruit farming is significant in climate change adaptation. It is not only great for environmental conservation but also as a source of earning income,” says Naporos.

Naporos says the lowland region had been experiencing flash floods which greatly affected production in the farms. He says since mango fruits do well within hot ecosystems, KVDA settled on promoting mango fruit farming in the region.

“We are now doing the two million mango seedlings and other fruits within the valley, to support agroforestry. The fruits also support food security, nutrition, are a source of income and at the same time provide vegetation cover to the already dilapidated ecosystem,” says Naporos.

Naporos says mango fruit farming will also go a long way in controlling the frequent landslides that have been affecting the valley over the years.

Jotham Rutto, KVDA regional manager, says once the fruits are harvested, the authority also provides a market for the farmers, buying the fruits which undergo value addition at the neighbouring mango juice factory in Tot, Elgeyo Marakwet County. The factory is located 25 km from Sigor and produces about 50 tonnes of purée annually.

“We produce good seedlings from the various improved varieties that we have which grow fast, have bigger fruits and give bumper harvest. We also buy the fruits from the farmers, make mango juice and enable them earn a livelihood,” says Rutto.

Rutto says although the region is relatively dry, the climate and the soils in the area support growth of the grafted fruits. The fruits mature after about three to four years.

“In the end, the residents are not only getting income from the sale of fruits but are also conserving the environment,” says Rutto.

According to KVDA, the project began in the 1980s but was not immediately adopted by the residents since the area was prone to banditry attacks and cattle rustling.

Also the majority of the residents were livestock farmers but they have over the years rapidly adopted crop and fruit farming for commercial purposes.

Although the grafted seedlings are sold for Sh120, the authority has empowered the residents and nearby institutions, giving them thousands of free seedlings.

Alice Mnaibet, a mango farmer who also works at the KVDA seedling nursery in Wei Wei, says farming has provided her with a source of income after she dropped her chang’aa business.

“Although I am from Kokwatendwo in the highlands, I decided to stay and work here because from this job, I can educate my children and provide them with the basic needs. Fruit farming has changed the entire outlook of this region. It is now green and beautiful like never before,” says Mnaibet.

David Tanui, an agronomist, says the grafted seedlings have many advantages.

First they mature within a shorter period, the seedlings are also resistant to pests and diseases, have higher yields and are easy to maintain due to their relatively shorter height.

“These fruits, unlike the traditional mango trees which would take up to seven years to grow, now mature within three years. Pest control is also easy because the plants are not so tall,” says Tanui. 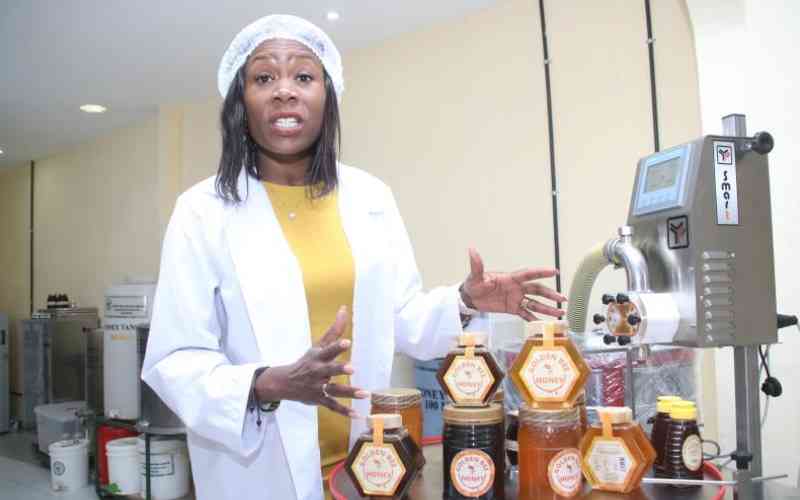 Queen Bee: Keeping bees is a profitable venture
Ms Otila worked at a bee-keeping company for 16 years, identifying gaps she felt were not addressed
Smart Harvest
By Jennifer Anyango
Oct. 09, 2022