How to grow and earn cash from groundnuts

Call it peanut, groundnut or a monkey nut, these small, oval shaped nuts were perhaps one of the first few domesticated grain legumes by mankind.

They are originally from Southern Bolivia - northwestern Argentina area of South America. It is believed the Portuguese took them from Brazil to West Africa and then to southwest India in the 16th century.

Not so long ago, these seeds or legumes, that are crunchy, flavourful and aromatic to the taste, thanks to its high oil content were a staple ingredient in many homes.

In Kenya groundnuts are locally called “njugu karanga” mainly grown in Western Kenya by small-scale farmers both for food and sale. These areas often have a tropical climate suitable for farming.

Many farmers are now embracing this high value crop where it is estimated that a farmer can harvest up to 1.6 tonnes of groundnuts in an acre of land.

Timothy Mutheu, a groundnut farmer from Makueni county explains steps on how to grow the crop.

“Low temperatures affect their flowering and seed formation. They also need 500 to 600mm of rainfall, well-distributed throughout the growing season,” says Mutheu.

To control seedling blights caused by soil bacteria and other fungal diseases, a fungicide treatment is recommended.

“Apron Star 42 WS gives good protection and can be applied by soaking seeds at 10g of Apron Star per 10litres of water. The mixture must be uniformly mixed with the seed.” Says Mutheu.

When and how to plant groundnuts

Just like maize, groundnut is an early season crop hence it must be grown at the onset of rains. In Kenya for instance, the best planting seasons are February to March and August to September.

According to Mutheu, there are two main varieties of peanuts in Kenya, the runner type and the bunch type (Red Valencia).

“I grow the Red Valencia, which is tastier and Manipita, which is the bigger groundnut variety,” he says.

The bunch variety are small, tastier and highly marketable variety. It matures in 60-75 days. The runner is the larger variety and is preferred because of the high yields. It matures in 90 to 100 days.

“Depending on the sizes a space of 30 to 45cm is needed between rows and 15 to 20 between plants,” says Mutheu.

According to Mutheu Red Valencia produces 2.2 tonnes per hectare while the Manipita produces up to 2.4 tonnes (2,400kgs) per hectare every season. Therefore he recommends the two varieties.

Aflatoxins are toxic chemicals produced by a fungus, Aspergillus flavus. The fungus occurs naturally in soils, but under hot, dry conditions, it can grow and spread to a variety of crops.

Groundnuts and maize are among crops that are prone to contamination with aflatoxins.

This is probably because visibly damaged nuts are more likely to contain aflatoxin, and the best nuts are sold whole rather than processed.

Grinding your own peanut butter from high-quality nuts is one way to avoid aflatoxin in this foods.

The International Food Policy Research Institute’s research on crops such as groundnuts has noted that a groundnut farmer can avoid aflatoxin scare by drying the crop thoroughly while preventing contact with the soil, and store them in a clean, dry place.

Healthline.com says peanuts are a rich source of beta-sitosterol, which aids in prevention of tumours in the body.

It obstructs the growth of tumors, especially in the case of cervical and breast cancers. Researchers reveal that eating peanuts at least thrice in a week, in any form be it boiled, soaked, fried reduces the risk of cancer by 58 per cent in both men and women.

Researchers say groundnuts improve the functioning of the brain due to its ample amounts of Vitamin B3 and niacin.

They are loaded with essential nutrients like niacin, protein, healthy fatty acids, and Vitamin E that play a crucial role in improving the cognitive function of the brain.

These nuts help to prevent degenerative diseases like Alzheimer’s, Parkinson’s, and dementia, so as you age, munch on a handful of boiled groundnuts to trigger your brain health.

These tiny, wonder nuts are a good source of vitamin C, that help in boosting immunity and reduce hair loss.

According to Healthline.com, regular intake of peanuts increases the production of collagen, strengthen hair follicles, prevent baldness and contribute to hair growth.

Peanuts are a good mix of protein, fat and fibre to improve gut health and can keep you satiated for longer hours.

With westernization of Kenyan cuisine, groundnut oil has slowly vanished from our kitchens mostly owing to various theories on how its consumption can lead to cardiovascular diseases and other chronic conditions.

However, things have changed in the last few years with traditional oils making a comeback into many Kenyan kitchens as more health practitioners continue to vouch for peanut due to its vitamin and mineral components.

While ground nut oil was a regular for seasoning various recipes and even for deep frying, these pale, pink coloured legumes served as an ideal mid-day snack option.

According to Healthline.com, groundnut oil is rich in monounsaturated fats and polyunsaturated fats. It is also ample in omega-6 fatty acids, that boost metabolism and the nervous system.

In Kenya you cannot walk in a shop and miss groundnuts packed in small sachets going for Sh20 to Sh300 depending on the size and flavor that has been added to it.

“The crop requires less maintenance and adds valuable nitrogen to soils if compared to maize which can earn a farmer less than 40 bags weighing 90kg which retails for as low as Sh2000.” Says Mutheu.

Now, please welcome, groundnuts and groundnut oil back into your kitchens and diet plans. 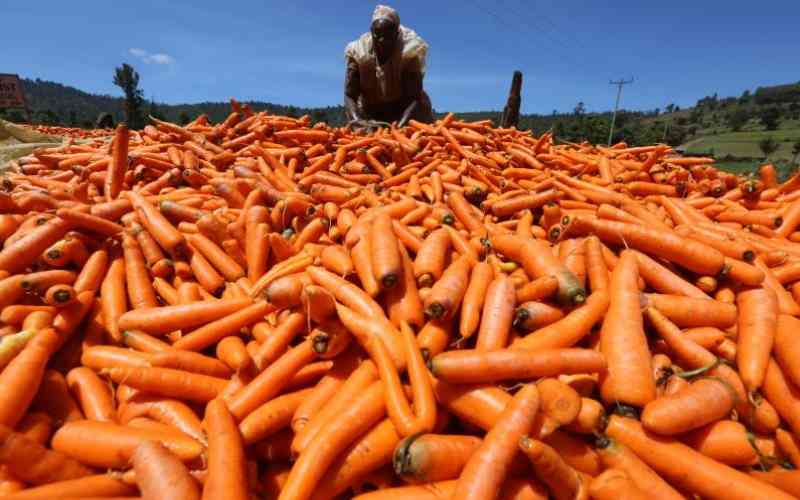 How to grow healthy carrots on small space
Growing this crop is easy all that it requires are optimal growing conditions.
Crop
By Jennifer Anyango
Aug. 30, 2022

Colibacillosis: Disease that targets young birds
The disease is caused by a bacterium scientifically known as Escherichia Coli.
Livestock
By Jennifer Anyango
Feb. 06, 2023
.