Livestock
By Nancy Nzau | 1 month ago

The first research done by the World Health Organisation investigating the growth of antibiotic-resistant pathogens around the globe revealed disturbing findings. The WHO discovered that antimicrobial resistance in bacteria, viruses, parasites and fungi is a serious health-concern worldwide.

“The problem is so serious that it undermines the achievements of modern medicine,” the organisation warned. “A post-antibiotic era, in which common infections and minor injuries can kill. Far from being an apocalyptic fantasy, it is instead a real possibility for the 21st century.”

According to Dr Victor Yamo, the farming campaign manager at the World Animal Protection - Africa, if you’ve treated a recurring infection to no avail, the culprit could be your beloved chicken or pork. Reports show Kenyan chicks and piglets are administered with antibiotics from the first day they hatch up to the day of slaughter. It has been noted that farmers abuse antibiotics to promote animal growth and treat common infections. This liberal diet of antibiotics fuels the rise of antimicrobial-resistant pathogens.

“Like humans, animals have their set of natural organisms, some good and some bad. We need to critically consider the bad ones, which have the potential to infect humans when passed-on during slaughter or ingestion,” said Dr Yamo.

“Mishandling animals causes them to release a stress hormone which not only hardens the meat but also weakens the animal’s immunity. Microbes can enter into the animal’s meat so that it will not last long, even when refrigerated. Therefore, you must treat your animals well.”

To avoid this needless dependence on antibiotics, it helps to treat farm animals well to mimimise their stress levels that compromises their immunity.

Dr Yamo said giving your farm animals clean water and feed is vital for their wellbeing.

“Whatever you cannot eat or drink should not be given to your animals. When you put dirty water into the production system, expect ripple effects,” warned Dr Yamo. “Animal mismanagement leads to poor quality products which expose consumers to harmful effects.”

Likewise, he added, “There’s an increase of agro-vets who unfortunately sell antibiotics to farmers without prescription. These antibiotics end up in meat, milk and eggs. Upon ingesting these products, you expose your body to small doses of antibiotics, which may not kill bacteria but train them to resist those particular antibiotics.”

Without prompt intervention, the United Nations estimates that resistant bacteria, parasites, viruses and fungi could kill 10 million people annually by 2050.

“Being good at research and drafting policy papers is not enough. The focus now is on what people can do to stop this menace that could be spreading just as fast as Covid-19. Laws and regulatory bodies need to be more stringent against agro- vets and pharmacies that prescribe over-the-counter antibiotics,” said Dr Dorothy Aywak, a Pharmacist and the Secretary of the Hospital Pharmacy Association of Kenya.

Besides humans mishandling animals, they’re also to blame for misusing their own medication. According to Dr Aywak, the growth of antimicrobial-resistant pathogens means that standard treatments no longer work. Infections are becoming impossible to control and harder to cure.

There’s a higher risk of spreading these harder-to-treat diseases to other people. Treatment resistance prolongs the course of illness and hospital stays, and drives up the risk of death. “Doctors are forced to prescribe or even import higher level antimicrobials. These drive up the costs of treatment and the risks associated with toxicity from harsher molecules aimed at these stubborn pathogens,” said Dr Aywak. 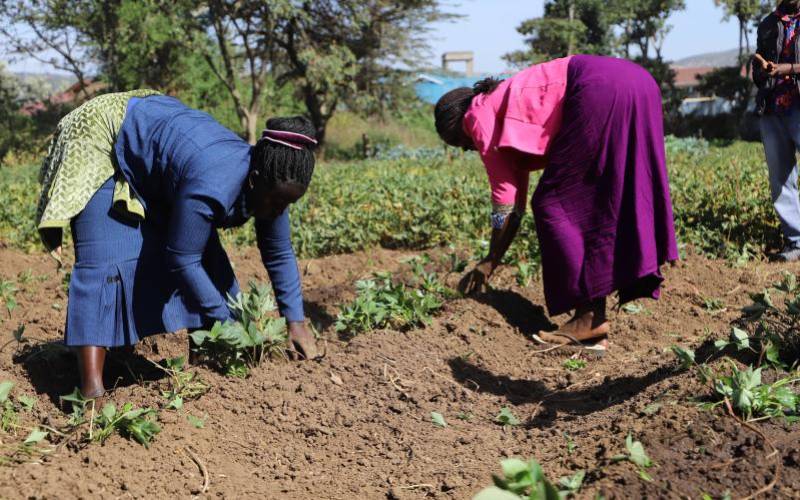 Local solutions that fight climate change
To deal with delayed seasonal rains, for example, the farmers in the Mwimenyereri self-help group prepare their fields earlier than usual
Crop
By Kagondu Njagi
1 month ago

Media and its role in food security and climate action
We need to constantly break down what food security means in terms of actions that are guided by the four pillars: availability, access, utilisation and stability
Events
By Njoki Thuo
1 day ago
.

Media and its role in food security and climate action
Events
By Njoki Thuo
1 day ago
Everything you need to know about growing green grams
Crop
By Kelvin Ogega
1 day ago
Honey bees feeling cozy in concrete beehives
Livestock
By Kelvin Ogega
4 days ago
Cassava value added products
Crop
By Jennifer Anyango
4 days ago
Farmers trained on disease and tsetse fly control
News
By Isaiah Gwengi
5 days ago
.