Coronavirus: PM Modi locks down India for 21 days from midnight 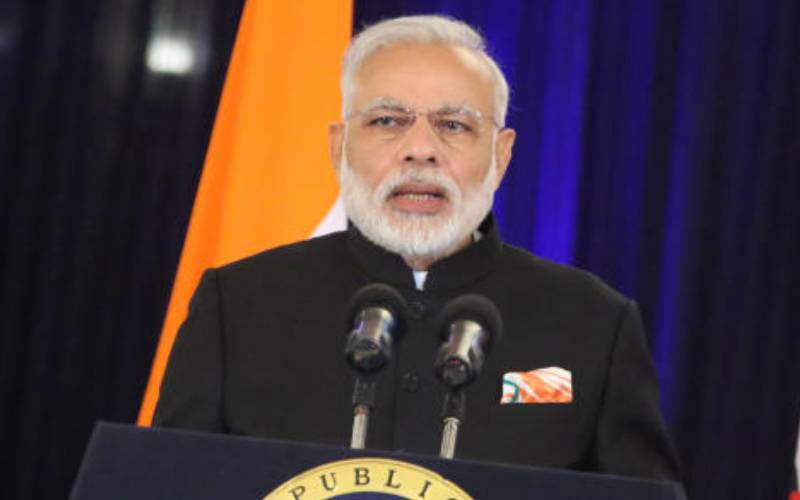 India Prime Minister Narendra Modi (pictured) has announced a total lockdown in the country for 21 days starting at midnight tonight to curb coronavirus spread.
The PM, in his second address to the nation, Modi said although the decision may hurt the economy, it is needed to save people's lives.
The Economic Times quoted him saying, "If we don't handle these 21 days well, then our country, your family will go backwards by 21 years."
He said according to experts, the only way was to practice social distancing.
The lockdown will involve not leaving homes.
Police enforced lockdowns across large parts of India on Tuesday, with curfews in some places, as health officials warned that the coronavirus was spreading out of big cities where it first appeared into the small towns that dot the landscape.
Health researchers have warned that more than a million people in India could be infected with the coronavirus by mid-May.
India has already severed international flight links and domestic air services will stop at midnight in a bid to halt the spread.
Modi issued the address for a second time in a week on the risks to the country of 1.3 billion people from the virus that emerged in China late last year and has spread to 194 countries.
India has found 485 cases of the coronavirus and nine people have died from the COVID-19 disease it causes but alarm is growing across the region about prospects for its spread into impoverished communities and the ability of resource-starved public health sectors to cope.
A health official in the western state of Maharashtra said new cases were staring to appear in small towns after a first wave emerged in big cities like Mumbai.
“This trend is worrying as rural areas have limited infrastructure to deal with the outbreak,” said the state health official who declined to be identified saying he was not authorized to speak to journalists.
States have been imposing their own lockdowns and have been suspending train and bus services and ordering traffic off the roads.
About three quarters of the country was under lockdown on Tuesday with most of the rest expected to follow suit by the end of the day.
A new concern in the northern Indian state of Punjab was the risk of infection from an estimated 90,000 overseas Indians who had traveled back to their ancestral homeland, the state government’s top health official, Balbir Singh Sidhu.
Many people from Punjab live in Britain, the United States and Canada and many travel back in the cool winter to visit.
A team of scientists based mainly in the United States said this week India’s tally of infections could jump to 1.3 million by mid-May if the virus maintains its rate of spread.

KAA dismisses as rumours reports of missing masks enroute Berlin, Germany in the wake of the coronavirus pandemic