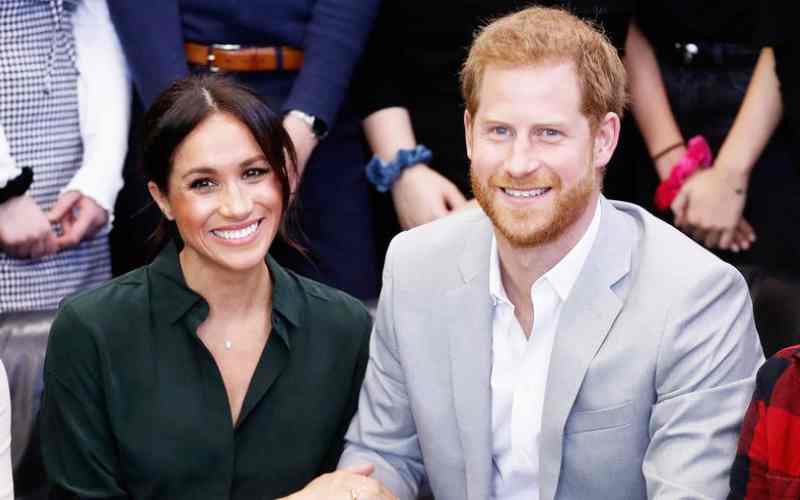 Prince Harry and Meghan Markle (pictured together)are closing their Buckingham Palace office resulting in up to 15 job losses following their decision to step down as senior royals, it was claimed tonight.

The couple are reported to have broken the news to their team in a face-to-face meeting after they announced their plans to move to Canada.

Some of the affected staff may be given a new job title within the Royal family but it is believed a majority of the roles will be made redundant, Mail Online reports.

It is claimed senior royals such as the Queen, Prince Charles and Prince William are aware of the office closure and job losses.

Among those alleged to be in the firing line include the couple's communications chief Sara Latham, who previously worked for the Obamas and Hillary Clinton, and Fiona Mcilwham, the newly appointed private secretary.

Ms Mcilwham is on secondment from the Foreign and Commonwealth Office so may be found a role within Whitehall, it is understood.

A source told the Mail: "Given their decision to step back, an office at Buckingham Palace is no longer needed. While the details are still being finalised and efforts are being made to redeploy people within the royal household, unfortunately there will be some redundancies."

The source insisted that while ‘Megxit’ had come as a complete shock to the team, most accept their fate.

"The Duke and Duchess have a small team, less than 15 people. The team are very loyal to the Sussexes and understand and respect the decision they have taken," the source said.

"They are all close and supporting each other. The team are busy helping to set their Royal Highnesses up for the future and working on a series of final engagements."

Harry’s long-standing programme co-ordinator Clara Loughran is also claimed to be among those leaving.

Clara, nee Madden, was last year made a Member of the Royal Victorian Order.

The prestigious award, which recognises distinguished personal service to members of the monarch's family, was revealed in the New Year's Honours list.

She was also revealed as the 'mystery woman' who handed Meghan her wedding flowers as she arrived at St George's Chapel, Windsor.

And she helped with the couple's 2018 wedding plans and public engagements, ensuring their diary was kept running smoothly.

The 33-year-old from New Zealand, accompanied the royal couple on their tour of Australia, Fiji and Tonga.

She previously jumped ship from Prince William and Kate Middleton's household to be the Sussexes' projects manager.

She is also said to have made such a great impression on William and Kate that when they met her parents in 2014, Clara's mother revealed afterwards: "William said to me that Clara is the star of the office."

Another press officer who is claimed to be leaving is Julie Burley, who also worked for Harry, William and Kate on their mental health campaign Heads Together.

While David Watkins, who was poached from fashion house Burberry in August as the couple’s social media expert, is also claimed to be losing his job.

It is understood that this includes the Mountbatten Festival of Music at the Royal Albert Hall on March 7, which will be Harry’s last engagement as Captain-General of the Royal Marines.

Harry and Meghan are also expected to attend the Commonwealth Day service on March 9.