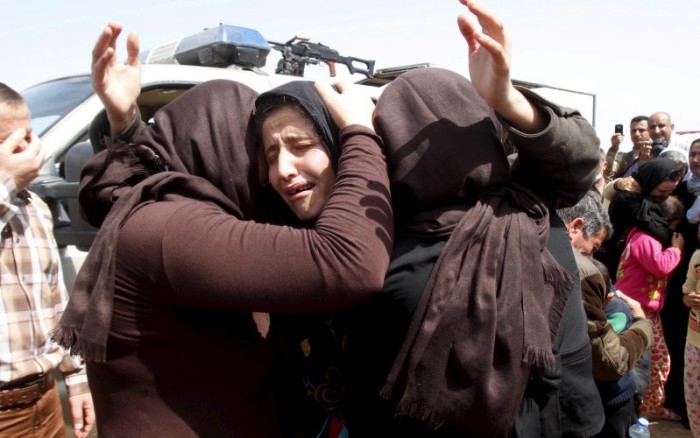 A mother of three from a remote area of northwestern Afghanistan remembers the day the head of a local Islamic State group came to her village, demanding money he said her husband had promised.

“I told him we didn’t have any money but that if we found any we would send it to him. But he didn’t accept that and said I had to be married to one of his people and leave my husband and go with them,” Zarifa said.

“When I refused, the people he had with him took my children to another room and he took a gun and said if I didn’t go with him he would kill me and take my house. And he did everything he could to me.”

Even by the bloody standards of the Afghan war, Islamic State has gained an unmatched reputation for brutality, routinely beheading opponents or forcing them to sit on explosives.

But while forced marriages and rape have been among the most notable features of Islamic State rule in Iraq and Syria they have been much less widely reported in Afghanistan.

While there have been reports in Nangarhar, the eastern province where Islamic State first appeared in 2014 and in Zabul in the south, deep taboos that can make it impossible for women to report sexual abuse make it hard to know its scale.

The group has a growing presence in Zarifa’s province of Jawzjan, on the border with Turkmenistan, exploiting smuggling routes and attracting both foreign fighters as well as unemployed locals and fighting both U.S.-backed Afghan forces and the Taliban.

For Zarifa, the attack forced her to leave her home in the Darzab district of south Jawzjan and seek shelter in the provincial capital of Sheberghan.

“My husband was a farmer and now I can’t face my husband and my neighbors and so, despite the danger, I left,” she said.

Another woman, Samira, who escaped Darzab and now lives in Sheberghan, said fighters came to her house and took her 14 year-old sister to their commander. Like Zarifa, she did not want to use her full name because of the stigma against victims of sexual violence.

“He didn’t marry her and no one else married her but he raped her and his soldiers forced themselves on her and even the head of the village who is in Daesh forced himself on my sister and raped her,” she said. Daesh is an Arabic term for Islamic State.

“This girl was there with Daesh for 10 months but after 10 months she escaped and now she’s with us. But I can’t tell anyone about this out of shame.”

Stories like those told by Samira and Zarifa have emerged in recent months as thousands have fled Darzab.

“Daesh has committed many horrors in Darzab that can’t be told,” said the Taliban’s main spokesman, Zabihullah Mujahid.

“Daesh does not abide by any rules and there is no doubt about the horrors people have been speaking about.”

Islamic State has no known spokesman in Afghanistan. But the accounts were broadly endorsed by government officials who say Islamic State is trying to import an entirely foreign ideology.

Documents captured in Syria in 2015 revealed ways in which Islamic State theologians regulated the use of female captives for sexual purposes.

“It is completely against our culture and traditions,” said Mohammad Radmanish, a defense ministry spokesman, who said that Darzab was not the only area where rapes and sexual slavery by Islamic State had been reported.

“When they came to our area, everyone knew what these Daesh had come for,” said Kamila, a woman from Darzab, who said that three girls were taken from the area where she lived.

“They would bind a girl or woman from a house and take her with them. At first they said that we would have to marry them. But then, when they took them, many men forced themselves on them and raped them.”