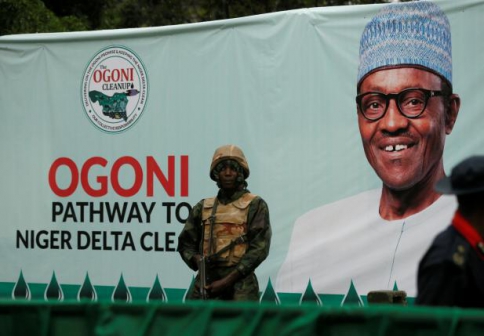 Militants launched new attacks in the Niger Delta on Thursday, vowing to bring Nigeria's struggling oil industry to a halt, and the president canceled a long-awaited visit to the region.

The army said militants killed six people on Wednesday when they ambushed a boat belonging to state oil firm NNPC in the Warri area.

"At about 2:00 am today @NDAvengers blew up the Ogboinbiri to Tebidaba and Clough Creek to Tebidaba Crude Oil pipelines in Bayelsa State," the group said on Twitter.

"This is in line with our promise to all international oil companies and indigenous oil companies that Nigeria oil production will be zero."

The group also said on Friday it has again blown up the Forcados oil pipeline, which was under repair after an attack in February.

"At 3:00 am today @NDAvengers blew up the SPDC Forcados 48" Exportline," the group said on a Twitter feed it uses to claim credit for attacks.

"We warned SPDC not to go ahead with repair works," the group said.

Nigeria's oil minister said in April that repairs to the Forcados pipeline, controlled by Shell Petroleum Development Company Limited, would be completed in June.

Royal Dutch Shell could not be immediately reached for comment.

But the NDA said in a statement late on Thursday that it was not responsible for the boat attack.

"Killing of sleeping soldiers is not our style," the NDA said in an emailed statement.

The Avengers group has claimed responsibility for other recent attacks on Chevron and Royal Dutch Shell facilities. A wave of such attacks have helped drive the country's oil output to a 20-year low.

Nigerian President Muhammadu Buhari canceled at the last minute a visit planned for Thursday to the Delta, source of most of Nigeria's crude.

Vice President Yemi Osinbajo made the trip in Buhari's place to launch a cleanup program in an area badly hit by oil spills, vowing to work with community leaders to end militant attacks.

No reason has been given for the cancellation of what would have been Buhari's first visit to the region since taking office a year ago. Western allies and local officials have told the former military chief that he needs to address poverty and oil pollution in the Delta to stop unrest.

"We are determined to put right the wrongs of the past, where the people of this land were treated unfairly and the environment unduly polluted and degraded," Osinbajo said in a speech in the town of Bodo in the polluted Ogoniland area.

"The cleanup of this land will require change on the part of all those who deal with the Niger Delta environment - particularly the oil companies and our communities," he said.

The Avengers have accused Buhari, a Muslim from northern Nigeria, of ignoring the problems of the predominantly Christian Delta.

Achim Steiner, executive director of the U.N. Environment Programme, joined Osinbajo at the ceremony. He said the cleanup "cannot happen overnight" but he hoped the government, oil firms and locals could work together to reduce pollution.

Do not assume COVID pandemic reaching 'end game', warns WHO