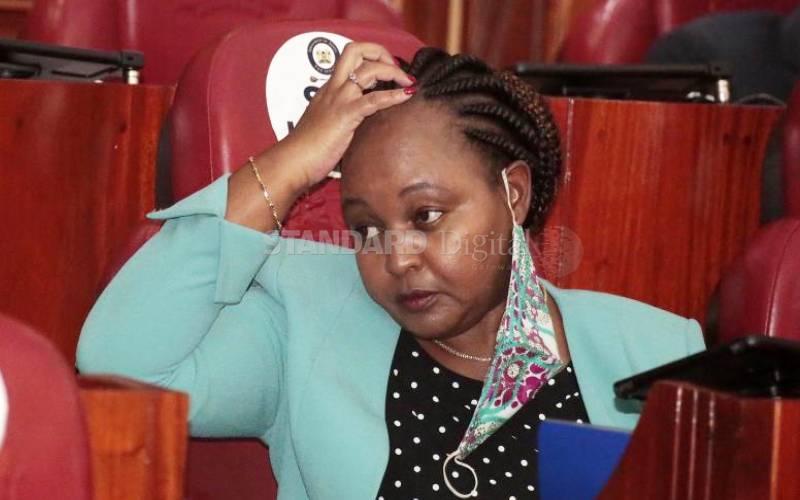 The stand off pitting Kirinyaga Governor Anne Waiguru (pictured) and the local County Assembly risks grounding the devolved unit to a halt, the governor has revealed.

Waiguru said the alterations by the MCAs on the budget estimates for 2020/2021 will derail the operations of the county.

The governor who has already appealed to the Senate, the Controller of Budget and the national Jubilee Party leadership accused the MCAs of reallocating Sh300 million meant for salaries for health workers to build their ward offices.

“The assembly submitted a completely new budget with a variation of over 30 percent per vote, going against the requirement of Regulation 37(1) of the Public Finance (County Government) Regulations 2015 which limits the assembly variations to 1% of the ceilings”, said the governor, in a press statement yesterday.

She said that the move by the MCAs to alter the budge was illegal and she could not approve the specific alterations done on the budget, citing several reasons.

“Removing the Sh300 million for health workers salaries and a further Sh20 million for payment of casual workers’ wages who are critical in cleaning our environment and health facilities is completely unacceptable,” she said.

Waiguru also cited that the County Assembly removed Sh14.6m for fuel for ambulances, water bills and oxygen for hospitalS, which she termed unacceptable since it means paralyzing operations in the critical health sector.

Further, governor complained that the Assembly removed Sh50 million, which was allocated as a part of matching funds to enable the county benefit from Presidential program on coffee revitalization.

“This will mean that about 68,000 coffee farmers from Kirinyaga will not benefit from the program, which includes access to Cherry Advance Revolving Fund,” she lamented.

Waiguru added that the removal of a further Sh184 million allocated as conditional matching funds for donor funded programs under Health, Agriculture and Education will mean that donor funded projects in those sectors will not be carried out in Kirinyaga.

She said will affect over 3,000 farmers, over 7,000 youth in the county’s polytechnics and residents who require health services.

The governor expressed fears that the county risks being penalized for not paying taxes to the Kenya Revenue Authority since the MCAs also removed Sh158 million meant for payment of taxes.

Waiguru also lashed at the county assembly for removing Sh59 million meant for legal fees, which she noted will hamper the county government’s efforts in pursuing over 200 cases mostly on recovery of public land.

“Some of these lands include Thigirici Land which is meant for establishment of an industrial park, Mwea Trust Land which affects over 10,000 families and South Ngariama Settlement Scheme cases which involve acres of land worth billions of shillings belonging to Kirinyaga people,” she said.

She said that this was despite the fact that the President signed into law the Office of the County Attorney Act which requires that counties have fully staffed and funded County Attorney office to handle legal matters in the county.

Waiguru also stated that the Assembly further removed Sh30 million meant for payment of recurrent pending bills which is a contravention of a Presidential directive set as a condition for accessing the exchequer for the county.

She urged the MCAs to reconsider their proposals and put the people of Kirinyaga first.

The ward representatives  passed a motion to impeached her last month but the Senate dismissed the impeachment.

By Collins Wanderi | 2 days ago

By Elisha Kamau | 5 days ago