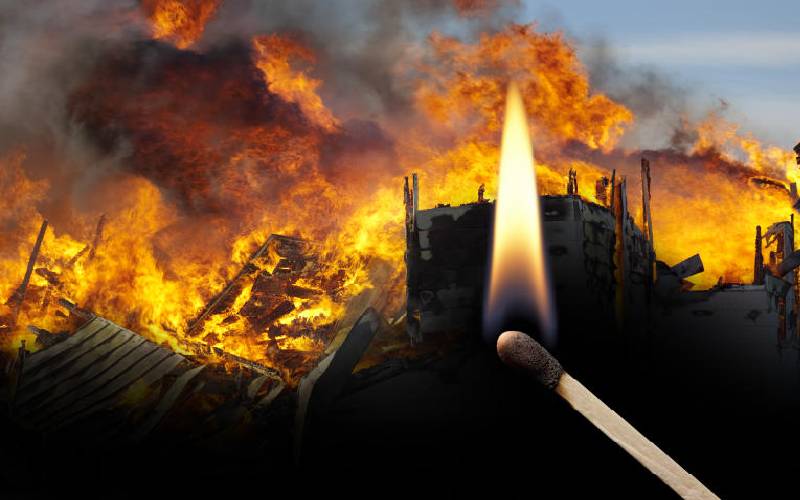 Three family members were burnt beyond recognition after a house they were sleeping in was set ablaze by a jilted lover.

The Wednesday night incident has shocked the residents of Munyanja village in Funyula constituency, Busia County.

The three who died were Evalyne Adaki, who had allegedly been inherited by the man who is suspected to have torched the house, Mwende Adaki, 35, and Rose Adaki. A fourth occupant, a minor aged three, was saved.

Some relatives to the those who died blamed police officers for their inaction. John Adaki claimed police failed to act after threats that led to the tragedy were reported to them.

Police recovered a bottle of petrol that was sprayed on the house before it was set ablaze. After setting the house on fire, the attacker closed the door from outside, making it impossible for the occupants to escape.

Evelyne is said to have reported the death threats she received from the alleged assailant only identified as Juma at the Port Victoria Police Station, but no action was taken.

“After he was rejected, he vowed to do something nasty to the family and true to his words, three people are dead,” said John.

“Police failed to arrest the suspect before he committed this heinous act. The threats were reported but no action was taken against the offending man,” he added.

John managed to break into the house that was burning, but only saved the minor as the three were already dead.

Police collected the charred remains yesterday. Investigation into the matter has been launched, even as the suspect remains at large.

The incident was confirmed by Samia Sub-county Police Commander Winny Siele. “We have started investigation and we hope to arrest the culprit and arraign him,” said Siele.