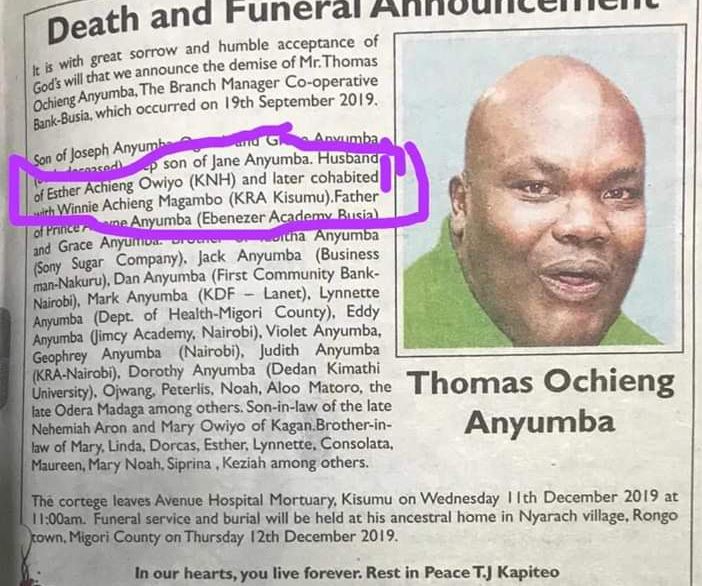 An oddity in departed banker Thomas Anyumba’s death announcement early this week has thrust back to the limelight the debate on cohabiting couples.

In yet another first in the evolving vocabulary of death announcements, those who placed the notice acknowledged the woman Anyumba cohabited with before his death.

This was besides acknowledging the ex-student leader’s wife in the same announcement.

It turned out the appearance of the word ‘cohabit’ in the notice was just the tip of the iceberg of a protracted battle between Esther and Winnie, which had led to the burial being delayed for months.

Until his death on September 19, Anyumba was the branch manager of Cooperative Bank in Busia. He hailed from Nyarach-Rongo village, Kambija sub-location in Migori County.

His burial was slated for October 3 but failed to take place after Esther went to court seeking to bar Winnie from the burial plans. As the battle went on in the courts, clan elders also intervened to solve the dispute and have Anyumba buried.

Sources said at the heart of the dispute is the distribution of Anyumba’s estate, which includes a residential flat at PolyView estate, a maisonette under construction in Mamboleo, both in Kisumu, and vehicles.

And now, a letter dated November 13, 2019, from lawyer PD Onyango and seen by the Saturday Standard, directs Winnie to vacate a house at Polyview Estate, Kisumu. It was not clear whether this was Anyumba’s property or whether the latest agreement to have him buried had overshadowed the vacate notice. The letter said she has up to January 2020 to vacate and should pay rent arrears, water and electricity bills -- from November 2018 -- before leaving.

“Take notice that you are now hereby required to clear the said rent arrears of Sh120,000 within the next 14 days from the date hereof with our collection charges of Sh12,000 from the date hereof and failure of which we shall instruct auctioneers to levy distress without any further reference to you whatsoever,” reads the letter.

“Take further notice that we are also instructed to give you notice to vacate the said premises and we hereby serve you with 60 days’ notice effective from November 13, 2019 to January 13, 2020 and you are required to hand over vacant possession of the said house on or before January 13, 2020 and you must clear any pending water and or electricity bill and rent during the notice period.”

The drama notwithstanding, Anyumba was buried on Thursday in Rongo, following an out-of-court settlement of the dispute. An insider said the two warring women attended the funeral.

“The first wife and the co-wife were here, at the burial ceremony,” said the source.

Morning Express: The Pros and Cons of cohabiting

Morning Express: The Pros and Cons of cohabiting

BM was five years when he was electrocuted leading to amputation of his right upper limb and burns on the abdomen.