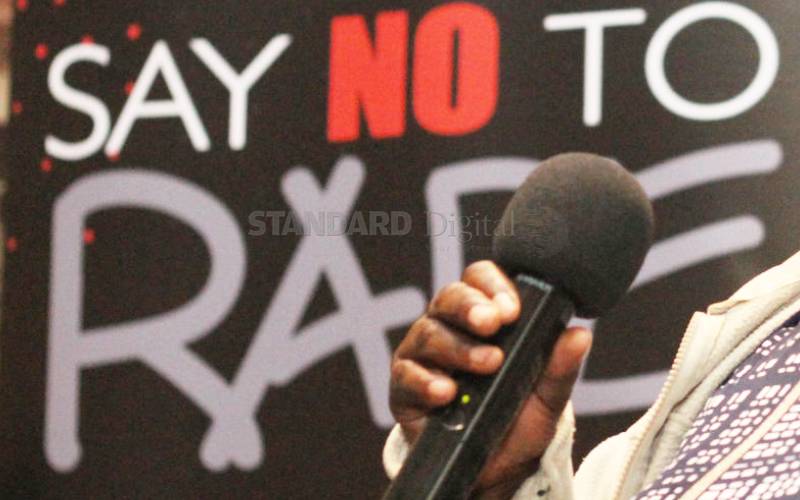 After years of suffering in silence, victims of defilement in Busia County are now coming out to speak about their chilling ordeals under people they trusted the most.

Many were sexually exploited by a father, uncle, grandfather or neighbor and infected with sexually transmitted diseases. Some contracted HIV and Aids from their biological fathers.

Some cases look like a story from a movie but it’s the harsh reality that these victims are living with. What makes their plight even worse is the fact that the community, which should condemn the abuse, unfortunately, sided with the perpetrators.

Millicent*, from Teso South Constituency, remembers vividly what happened to her on January 25, 2010. It was a Monday evening and the then 12-year-old girl, who was in Standard Four, had just arrived home from school. As was the norm, she embarked on house chores. Her father arrived home and closed the door, ordering her to undress or he would kill her.

The fearful girl obliged and her father defiled her. Her mother, a fishmonger was at a local market centre, oblivious of what was going on at home. The cruel man issued a stern warning to the minor: ”I will kill you if you tell your mother what happened.”

She kept quiet about the incident for six days. But Millicent’s mother noticed something was amiss. On inquiry, the young girl opened up to her mother who in turn told her mother-in-law the disturbing news. At Alupe Sub County hospital, it was confirmed the minor had contracted HIV.

“I was tested and told that I had been infected,” said Millicent. ”I thought of killing myself many times but then I realised that having the disease was not the end of life.”

Word went round in the village that ‘she had slept with her father’, and due to constant taunting from her peers, she dropped out of school.

The matter was reported to Adungosi police station and after the father got wind he was being pursued by police he escaped to Uganda, never to be seen again.

“It was a big shocker for me. I never imagined my husband could do such a thing to our daughter,” Millicent’s mother said.

Just like Milicent, Rose*, from Butula constituency was also defiled by her uncle at the age of three. She had gone to stay with her maternal grandmother after her mother got divorced.

On the material day, her mother noticed bloodstains on her clothes from her private parts. She was tested and found to have contracted HIV. The now 18 year-old has been on Antiretroviral drugs (ARVs) ever since.

Rose says her lowest moment was when she was in Class Six, a fellow pupil came across the ARVs in her bag and told everyone in the school that she was HIV positive.

“Some pupils rummaged through my bag and found the drugs and the news went round the school. I’m very grateful though that the teachers stood with me and warned the pupils against harassing me,” said Rose. “It was not my wish either to become infected. Being spiritual has also helped me to cope, otherwise I would have killed myself,” she continued.

Rose is now in Form Two in a girl’s school in Butula. She wants to be a lawyer in future to represent victims of rape and defilement in court. Her uncle was arrested and released in unclear circumstances before he died.

Jane*, is another victim from Butula constituency. She recounts details of the incident. She had been left alone are night after her parents went to an overnight vigil of a fellow villager. In the middle of the night, her father returned home and defiled her. “I remember he had a knife in his right hand when he asked me to undress otherwise he would stab me to death,” she said.

At just the age of 13, Jane became a mother. She had conceived from that crime and had a difficult delivery through caesarian section. Her father discharged her from the hospital and took the baby away from her. She was then sent to Mumias to work as a casual in a hotel. She never got to see her baby boy again.

Another victim, Phylis*, was was defiled by her paternal grandfather who had asked her to boil some maize for him before locking her in and defiling her.

The arrest of the perpetrator angered three of his friends. As Phylis was going to school one morning in August this year the three kidnapped her and defiled her in turns after sedating her. The second ordeal happened less than two months after the first one. “I found myself at the river bank after gaining consciousness the following day,” said Phylis.

“They were riding on a motorbike at around 6am as I was going to school. They asked my name and after I responded, they dragged me to a thicket where they defiled me in turns,” she said amid sobs.

The 16-year-old girl will be joining Form Two next year.

Uncle turned on me

Miriam* another a victim remembers what befell her on August 12, 2019. He uncle had asked her to accompany him to Matayos where he operated a business. At 8pm, they set off for home in Butula Constituency. On reaching a river not far from their home, her uncle in his 40s told the boda boda rider to drop them there and they would walk the remainder of the journey.

“He grabbed my neck, stuffed my mouth with some piece of cloth and defiled me,” she said. She reported the matter at the Bumala police station but nothing came out of it. He was later arrested for a different offence and released.

“We have not been told if he was ever arrested. I hope one day, he will be found and face the law,” said Miriam.

In Nambale, on August 22, 2019 a 12-year-old Irine* was in her grandmother’s house when a neighbour, who the father identified by name, entered the house, dragged her to his house and defiled her.

The suspect was arrested and police recovered a mattress with blood and clothes of the minor. He was arraigned and released on bond.

“The father of the suspect offered me Sh30,000 so that I could drop the charged but I refused,” said the victim’s father. “He told me if I refused to take the money, others would take it and the case will go nowhere.”  The case is at the Busia Law Court and the hearing is slated for December 19.

The Founder and Director of a local non-governmental organization, Rural Economic and Empowerment Programme, Mary Makokha says those charged with the responsibility of taking care of the minors were the ones taking advantage of them and abusing them sexually.

She said victims’ families are often offered money to drop cases. “The community has normalised incest,  and that is why in cases where a mother reports the matter to police she is chased out of the home,” said Ms Makokha.

At least two cases of defilement are reported at the children’s office in Busia every week, according to the County Children Services department director, Esther Wasige. Some cases are not reported as victims’ families decide to engage perpetrators and the matter is handled at the village level.

Despite the high cases being reported, the county does not have a rescue centre where victims of gender-based violence can be housed and counselled.

*Not their real names

I never gave up on new law, recalls fiery Buke

I never gave up on new law, recalls fiery Buke