Family where everyone has a duty in their 3-acre farm

The farmer, who does mixed farming, has appointed each of his household an important role in his ever busy three acre farm.

Etyang has appointed himself the farm general manager, his wife Julian Anyango is his deputy while his six children as each section managers.

“This farm is so big and there is a lot to be done, that is why I have given each member a role. I also want to train my children to be farmers from an early age,” says the farmer.

His firstborn Victor Apollo (14) is in charge of livestock, Violet (12) poultry, Vitalis (10) cassava and sweet potatoes, Veronica (9) and Vivian Akasiba (8) collaborate with their mother Anyango on value addition on cassava and potatoes while the last born Valentine (6) takes care of the cassava grinder.

The farmer praises mixed farming because when one crop fails the other survives the bad times.

“I get a net profit of between Sh6,000 to Sh 20,000 every month which I use to feed and educate my children. By allocating them farm work, I am mentoring them to be future farmers. By the time they become adults, they will appreciate agriculture and the value of team work,” he says.

Mr Etyang’s larger portion of land, close to one acre is under cassava, a crop he has a soft spot for.

“I plant MMH 0183 cassava which are resistant to the notorious mosaic disease among other infections. This variety matures in eight months unlike the traditional varieties which take over two years. I add value to the cassavas by crashing them to make ‘African weetabix’,” he says.

African Weetabix is a cocktail of cassava, palm oil and soya beans. It’s rich in vitamin A we eat it as a snack or a main meal, we sale the surplus.

He harvests 20 to 30 bags of cassava per season which he sells in the local market.

Etyang also specialises on two varieties of sweet potatoes — SPK 004 and Kabonde on his three quarter acre farm and harvests 20 to 40 bags.

He sells a bag of sweet potatoes at Sh 3,000. His two cows produce18 litres of milk per day which he supplies to St Marys Primary and secondary school.

He is anxiously waiting for his 400 cat fish to mature so that he sells them to eager buyers who have already made orders. The greatest problem facing his venture is water shortage.

“I have not gathered enough resources to get piped water, I sunk this bore hole and it often dries up especially during dry season,” he explains.

The 43-year-old farmer hopes to expand his farming by embracing other initiatives and creating more jobs for youths in his village.

“The work of your own hands is sweet and rewarding. Farming does not need a lot of capital, just the spirit and passion to work,” he says. 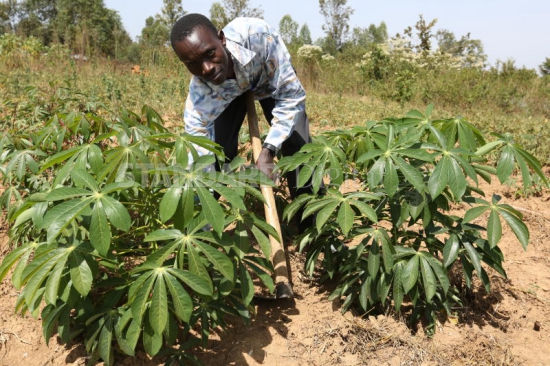 I plucked first million from the farm