It has been the public's expectation that the Government would take disciplinary action against security officers who slept on the in the wake of the Garissa University attack that claimed 148 lives early this month.

By The standard | 6 years ago

Girl 'hit' by officer dies after two months in coma

Tears flowed freely at a Mombasa hospital Sunday as relatives of a girl injured during the Mpeketoni dawn-to-dusk curfew lost the fight for her life after a month and half in a coma.

The Independent Police Oversight Authority (IPOA) has released a report that singles out the Police Service for censure, having failed to provide adequate security to the residents of Lamu County even after the National Intelligence Service (NIS) provided enough intelligence reports for the police to act on in an effort to forestall terrorist attacks.

Bad times ahead for Kenya due to insecurity, experts warn

Despite positive projections by the Government in a bid to revive the ailing tourism sector, stakeholders at the Coast are now warning that recent violence in Lamu, Tana River and Mombasa may lead to the sector's collapse.

The Director of Public Prosecution (DPP) has secon... 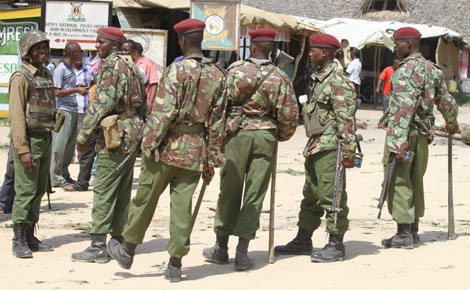 Fifty suspects have been arrested in connection wi...

Mystery of attacks deepens as Timamy awaits day in court

Lamu Governor Issa Timamy made history this week b...

Lamu development projects will take off despite terror attacks

The Lamu Port project will take off despite recent...

The National Council of Elders has advised Preside...

12 schools closed in Mpeketoni after killings

Twelve out of 36 primary schools in Mpeketoni have...

Girl 'hit' by officer dies after two months in coma

Tears flowed freely at a Mombasa hospital Sunday a...