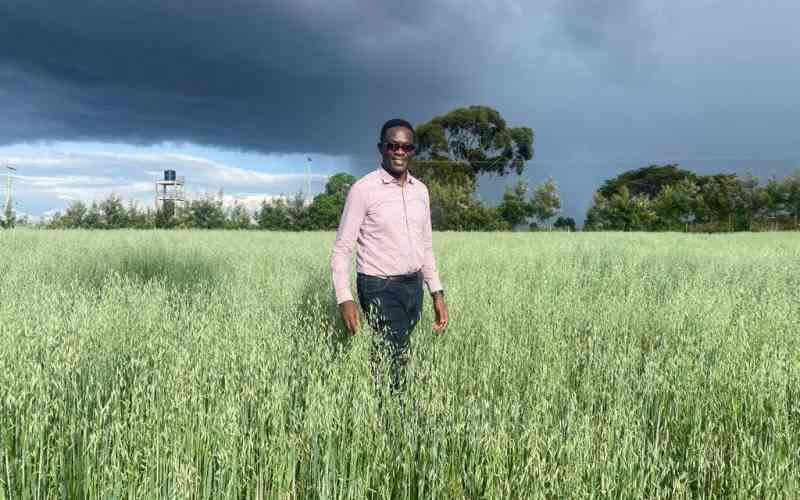 Kenyan women wanted a piece of him. Some Kenyan male voters want him in pieces. But Ezra Simiyu Chiloba, Director General/CEO of the Communication Authority of Kenya and former ex Independent Elections and Boundaries Commission (IEBC) CEO, has stayed put

As The Nairobian took the bumpy, dusty, and rough Kitale-Kolongolo road to the sleepy village of Mutua in Kwanza Constituency, Trans Nzoia County where he was born — where he grew up — it was somehow reminiscent of his unwinding journey, working with international bodies such as the United Nations on his way to heading Kenya’s top electoral body.

After two hour’s drive, one arrives at Chiloba parent’s home, a stone throw away from Mutua market that’s bustling with maize business. Here, there are no star-struck women drooling over Chiloba, asking where he goes to church so as to renew their acquaintance with God there and meet the bespectacled dude with a baritone voice, altar boy looks who loves German cars.

Few know him as ‘Chilobae’, the tag swooning local lasses pegged on him not knowing his email address was ‘Chilobae.’ The man who once said he never sought fame — it found him at the epicenter of the August 8 General Election — hails about 40 kilometres from Kitale town, where we were welcomed by a little girl. Inside the recently spruced up family house, we meet Mama Joan Chiloba who politely welcomes us before asking about our mission. She dials her cellohone to get permission.

But the person on the other end of the line declines. “I’m sorry I cannot talk about him unless you produce a letter from my son or from County Commissioner. Furthermore my husband is away,” she said.

We drive off from the compound with one permanent house to the nearby Mutua Primary school where Chiloba sat his Kenya Certificate for Primary Education (KCPE). Mutua Primary, with a rusting iron sheet roof. The head teacher, Reuben Wanyama, directs us to a Mr Ademi, who taught Chiloba for one year before his KCPE.

Mwalimu Adema recalls that “He was a bright, obedient and disciplined pupil. He was our school prefect and was not in the wrong” and that “he was friendly and liked motivating his classmates to work hard for good results.”

From Mutua Primary (Mutua means last born in Bukusu), Chiloba proceeded to  St Joseph Boys High school, now a national school in Kitale where he dropped out in Form Two due to lack of fees. But all was not lost. Chiloba’s aunt, Florence Nafula, took over and enrolled him at Friends Kwanza Boys High school. Nafula explained how her sister [Joan] requested her to convince Chiloba to join Friends Kwanza and complete his education since his parents were unable to raise the fees charged at St Joseph Boys.

“My sister asked me to talk to him so that he can join another school. He agreed to Friends Kwanza Boys,” said Nafula recalling how she sold vegetables to buy paraffin for Chiloba to study at night.

“I made a living by selling vegetable at the market to raise money to buy paraffin and soap for Chiloba. The boy was determined to excel and this motivated me to ensure there was paraffin for him to revise at night,” explains Nafula, adding that, “On several occasions he helped me with the cooking and never waited for me to come back to prepare supper. He was not a womanizer and at no time did I see Chiloba with a girlfriend.”

Nafula describes Chiloba as strong Christian, an Adventist who was a humble, respectful boy who wanted to study medicine but some grades from few subjects worked against him. “He told me he wanted to pursue medicine but after the results were released he found that some subjects had not favoured him so he was admitted to pursue law,” says Nafula.

At Friends Boys, where Chiloba studied for his final two years, many remember him as God fearing and hardworking student. Reuben Barasa, the school’s bursar says Chiloba was one of the bright but needy students who received a bursary as he “was a top performer. In fact, this school always supported him with a bursary. He was in charge of the Seventh Day Adventist church choir in the school,” Barasa told The Nairobian, adding that though the school was unable to trace his 1997 results  when Chiloba sat for his KCSE, Barasa recalls that Chiloba topped with an A- [minus].

With his stellar results,  Chiloba was admitted to the University of Nairobi School of Law at Parklands from where he graduated in 2003 — and five years later earned a Master’s degree (Distinction) in Public Policy from the Central European University in Budapest, Hungary.

Chiloba has been pursuing a PhD in political science and government at the University of Nairobi since 2014.

“The young man was so good and straight forward. At no one time was he found in the wrong,” said Barasa of Chiloba, also a member of the school’s Board of Governors and who recently donated textbooks for the school’s library.

Abort or keep it? Let the woman make her choice
BLOGS
By La Patrona
6 hrs ago

Hotpots: Here are events to attend this week
ENTERTAINMENT
By Geoffrey Korio
2 days ago

When politicians come face to face with family drama
NEWS
By The Nairobian team
2 days ago
.