Office of Opposition Leader will be good for our politics in the long run, not just for Raila Odinga 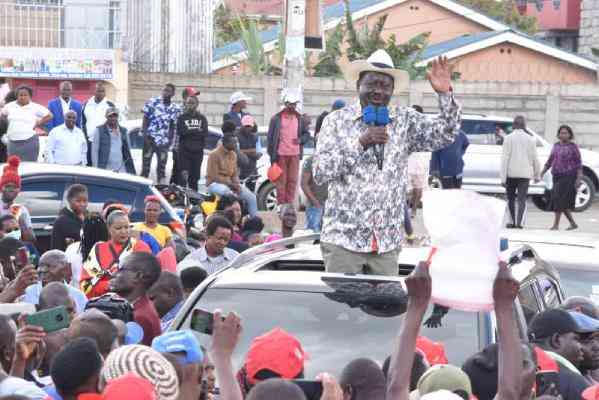 President William Ruto’s nod to a proposal by the Azimio Party to amend the Constitution to create an office for the Leader of the Official Opposition could finally sort out a legal void created by the 2010 Constitution which denied the second-best presidential candidate in a General Election a chance to play a role in the country’s governance.

Unlike in the old dispensation, the new supreme law, which took effect ahead of the 2013 elections, does not allow presidential candidates and their running mates from simultaneously seeking parliamentary positions.

The move, which was informed by a desire to shield Parliament from the presidency as opposed to the older order when the President controlled even the House’s calendar, appears to have come to haunt its proponents who are now in the Opposition.

Recently, National Assembly Minority Leader Opiyo Wandayi revealed that Azimio has drafted a Bill to amend the Constitution, to create the office, which will then be occupied by Azimio Leader Raila Odinga.

As it is today, save for the Handshake arrangement of 2018-22 that allowed Raila to have one leg in government, the Opposition supremo is operating outside of any structured, legal arrangement despite commanding the support of 6.94 million Kenyans who voted for him in the August 9 General Election.

In the current set-up, the role is played by the Minority Leader in the National Assembly or Senate, in the event that the party that comes second in the election does not win majority seats, and he or she should be an elected MP.

Since he is not an MP and hence cannot occupy the seat reserved for the Leader of Opposition, Kenyans are witnessing a repeat of the 2013-2017 situation where a dynamic Raila has gone back to what he knows best - marshalling the support of the citizens to wage his war against government decisions and programmes he does not agree with.

On Wednesday, he initiated a series of public rallies, dubbed public consultations, the first of which was held at Kamukunji grounds in Kibra, Nairobi.

According to the proposal by an Azimio technical team, the office will have wide-ranging powers, including an annual address to Parliament and leeway to nominate persons to constitutional statutory commissions. It will receive funding from the Exchequer.

Sources said Ruto told a majority party MPs meeting in Nairobi on Tuesday that they should back the Bill, in a move that is in concert with his previous posture that the Kenya Kwanza administration is ready to give room to the Opposition to play its watchdog role.

Significantly, United Democratic Alliance chairman Johnstone Muthama was the first to rally behind the initiative even as some of its MPs vowed to oppose it.

“That office needed to be there yesterday, not even today. We are doing it too late. Those in government and opposition are in those positions by the will of the constitution,” Muthama was quoted in a section of the press as stating.

According to Muthama, to have a fair government that serves its people effectively, opposition must be allowed, and that’s democracy that should be cherished by Kenyans.

However, Nandi Senator Samson Cherargei opposed the idea, saying it would further drain the country’s resources.

“The creation of the office of the opposition leader shall unnecessarily strain the country’s resources,” he said.

A similar view is shared by History professor Macharia Munene, who says: “ There is no need of creating special positions for individuals. It is an insult to our intelligence. Those who removed the provision for presidential candidates running for Parliament thought they were clever in trying to fix other people. Their mischief is haunting them.”

But Ruto is said to have told Kenya Kwanza MPs that creating the office should not be seen as a Raila affair but as a move meant for posterity.

What is, however, clear is that the current dilemma was created by the push by pro-democracy agitators, including Raila, for Kenya to adopt a parliamentary system of government with a prime minister as head of government and the president as head of state but playing ceremonial roles.

However, the following a push by President Mwai Kibaki and his allies, the presidential system was retained but with huge checks and balances and dispersal of powers to Parliament, the Judiciary as well as constitutional commissions and independent offices.

Kenya’s governance system is, however, a mongrel that fuses together the US, South African and Nigerian models while retaining some aspects of its original Westminster structure.

Indeed, the National Assembly Building, which before independence hosted the Legislative Council of Kenya (Legco), has, as its main feature, an English-style clocktower which was a design requirement to have the Legislative Buildings echo the Palace of Westminster and Big Ben.

Political analyst Dr Wang’uhu Gitonga avers the current arrangement does not work for the country since the process of bringing the national executive to account is clouded and subject to abuse.

“I think the Opposition should have a chance of directly questioning government actions instead of relying on the majority side to bring answers from CSs which often are not satisfactory. In a sense, a constitutional office of the Leader of Opposition will also give weight to its role,” he told The Nairobian.

“Sometimes, I think the Leader of Minority is not taken seriously since he is viewed as just another MP,” added Gitonga.

But it is just the Opposition that feels divorced from the parliamentary system. The executive too.

Not all is, however, lost given that the executive has also been pushing to have CSs attend House sittings when required.

According to Ruto, they should be “allowed to get to the floor of the House and answer questions and explain government policy so that the people’s representatives can interrogate what their government is doing.”

“We do not think that it is enough for Cabinet Secretaries to go to committees of Parliament. We have discussed with our Speaker and there is a possibility of us ensuring that we run an accountable government,” he told Kenya Kwanza MPs after winning the August elections.