Though thick and thin, I'll stand by my wife Governor Kawira Mwangaza 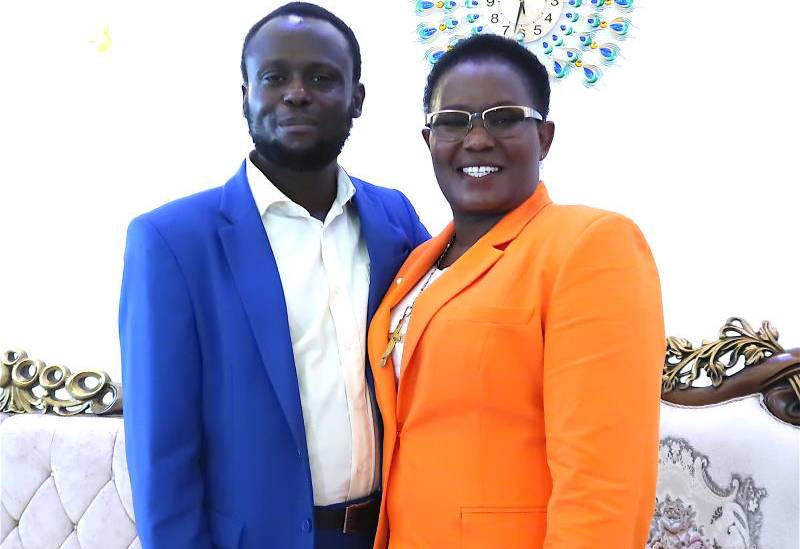 She was the rank outsider. A businesswoman and preacher who became Meru Woman Rep in 2017, Kawira Mwangaza was roundly ignored and mocked when she voiced ambition to run for governor. For the Bishop was going to war with incumbent governor Kiraitu Murungi, the Harvard University trained lawyer-politician with a rumbling laugh who made his bones battling President Daniel Arap Moi when the woman rep had nary a pebble on her chest.

In the mix too was Senator Mithika Linturi, the millionaire politician whose personal affairs have probably roused up more newspaper headlines than the scarves in the woman’s rep’s wardrobe.
“I don’t fear her; let her come,” Kiraitu, code name King’ang’i, the Crocodile, scoffed.
But when the fog of battle cleared,  the Crocodile was lying in the mud, and Linturi was wandering in the dark. Kawira Mwangaza was governor.
Then entered Baichu Murega, her guitar strumming, hat wearing husband. He was standing by her side, sitting by her side, he was ndaani , ndaani ya serikali!
He was everywhere; almost ever-present by his wife when she convened official gatherings, a fact that rubbed Meru MCAs the wrong way.
“He should stay away from her and give her space to discharge her duties as governor. The Ameru elected only one governor (Kawira) and Baichu would do well to keep his distance and leave her to do her work,” they mumbled.

Appointing him “Patron of Meru Youth Service (MYS) and Hustlers Ambassador was the last straw. The MCAs have initiated her impeachment.
But Baichu insists their anger is misplaced because in his role as MYS patron, he is acting as a donor and mentor without pay from his wife’s administration.
“My assignment as patron of MYS means I will be donating my resources to facilitate the MYS to identify talented youth, empower them with skills and mentor them to achieve their potential.
“As Hustlers Ambassador, my job is to act as a bridge to link the people at the grassroots with county opportunities and initiatives for development,” he told the Nairobian.
This noise,” he said, “will not distract the governor from discharging her duties.
“The governor they elected is very hard working. Despite all the hullabaloo, the services and the functions of the county government are going on as they should. There is no single service or function that has been paralysed by that noise, which is all politics,” he said.
Just who is this man?
Baichu describes himself as a missionary and says he has been working closely with his wife’s “Okolea Kaana Ka Meru”, a charitable initiative to assist the most vulnerable groups across Meru.
He adds that he has supported his wife’s political work through his music since 2011 when she ran for the Buuri Parliamentary seat.
Will he stop being by her side?
“It is not possible. Because I have always been there, even throughout when she was a Woman Rep and doing the Okolea programmes. I have always been there and even now as governor I am going to be there. I am not going anywhere,” he said.

Accept and move on

He said those who were uncomfortable with his presence should accept the reality.
“Those who are uncomfortable are not the citizens. It is the competitors we beat hands down. They will get used to it,” he said.
Baichu said he has no office to operate from even as he works with the governor.
“I will be operating as I have been operating since 2011 — accompanying her to public meetings and listening to residents.
“I have been visiting villages and when I get special cases that require her attention. People mostly reach me through my mobile phone because when I worked as a journalist at Baite TV many people got my contacts,” he said.
Baichu explained that people who have issues easily reach him and that he conveys them to his wife: “I do not need an office to operate,” he said.
Apart from Baite TV which broadcasts in the local language, the couple runs a high school and he is a preacher at Baite Family Fellowship, which offers residents another opportunity to reach him.
“Those who cannot reach me in the field have been coming to the church. They come and register their needs.”
He said while he and the Governor were occupied in development activities during the day, they relax in the evening and sleep late.
“She has always been busy even before she ventured into politics, right from the time she was a cement distributor for the whole of (defunct) Eastern province,” he said.
“Before politics, we used to distribute cement to the whole eastern region and manage a fleet of more than 100 lorries. That was a busy time,” he said, adding that they still run the school and the ministry.
Despite being a governor with a busy schedule, Murega appreciates that she performs her role as a wife diligently by cooking for him and taking care of their biological and adopted children.
“One of our children is already grown up and married, the other is in Form Four and in boarding school. When he is home, me and Mama (the governor) take care of him. She (the governor) cooks for me when we are home. She is a very good cook. I love Kimeru mukimo, some mashed bananas, potatoes and some greens,” he said.
When away from the county office, he enjoys walking , jogging and doing light exercises to keep fit.
“I also have a big farm that I visit during the weekends. I am currently growing beans and traditional crops. But I am intending to venture into apple orchards. I have done some research and want to go into that kind of farming,” he said.

The couple has supporters

Maendeleo ya Wanawake Organisation (MYWO) Chairperson Kanana Nteere supports Murega’s roles in the county and she told off those who are saying he should stay away from his wife and County offices.
Nteere said during the campaigns, most local politicians aligned themselves with her opponents, former Governor Kiraitu Murungi and Mithika Linturi, now Agriculture Cabinet Secretary.
“All the elite in Meru were with Kiraitu and Linturi. But now that Mama (Kawira) won the seat, they are jealous. Murega was by her side all the time. I do not see why they want to drive him away now,” Nteere said.
Nteere said Kiraitu’s wife Priscilla Murungi and Meru’s first governor Peter Munya’s wife used government vehicles as spouses when carrying out duties assigned to them by the governors.
“Priscilla was always around and we did not hear such complaints. So why are they complaining about Murega now?”