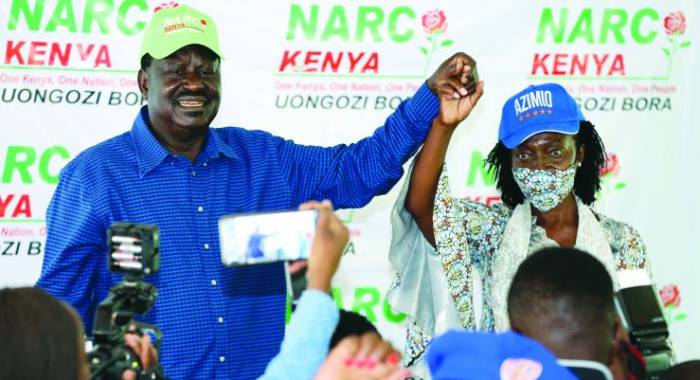 When Narc-Kenya leader Martha Karua joined the Azimio la Umoja movement, which is backing ODM’s Raila Odinga for the presidency, she revived memories of the “Young Turks” of the early 1990s.

Discerning Kenyans took to social media to describe the move as a regrouping of the second liberation heroes.

The “Young Turks” refers to the group of radical lawyers, intellectuals, university lecturers and youthful politicians who formed the core of the forces pushing for an end to the one-party rule in the country. It led to the repeal of Section 2 (A), which had made Kenya a de jure (by law) one-party state.

By design or default, all of them are now in Azimio La Umoja with Karua’s entry on March 23.

Before making her decision, Karua had been reluctant to join either Azimio or the Kenya Kwanza Alliance of Deputy President William Ruto, holding that both had corrupt elements on board.

This even as pressure piled on her to declare her stand following the disintegration of the One Kenya Alliance (OKA) that saw Amani leader Musalia Mudavadi and his Ford-Kenya counterpart Moses Wetang’ula line up behind Ruto while Kanu chairman Gideon Moi and later, Wiper Leader Kalonzo Musyoka joined Azimio.

Karua later maintained that she would make a stand after ascertaining which of the two alliances had fewer thieves.

Karua is well known for her firm belief in the rule of law and integrity. She resigned as Justice and Constitutional Affairs minister after President Kibaki went behind her back and appointed judges, among them some whose appointment she had advised against.

Before making her decision, Karua held lengthy discussions with Raila. While announcing she had agreed to join Azimio, Raila recounted the role she played in the second liberation, revealing that at one time, she mobilised lawyers to escort him from Agip House to Central Police Station to avert a plot to arrest him.

“I submitted myself to the police, but the officers claimed that they were not looking for me. However, that was an excuse because they wanted to come and arrest me at my home at night,” he said during a press conference at Serena Hotel.

Raila was to be detained without trial on July 6, 1990 alongside Gitobu Imanyara and Mohammed Ibrahim, now Supreme Court Judge, as the Government cracked down on organisers of the Kamukunji meeting that was to be held the next day to call for constitutional reforms.

Three days earlier, the leading figures in the quest, Kenneth Matiba and Charles Rubia, had also been detained without trial.

Orengo, ever the cunning master of street battles, managed to make it to Kamukunji atop a pickup alongside Martin Shikuku and others but police could not allow the rally to take place.

It, however, marked a turning point in the pro-democracy struggle and hastened the return to multi-party democracy. While the likes of Raila and Imanyara were detained, Kiraitu and Nyong’o fled into exile. Dr Kituyi and his wife, Dr Ling Kituyi, were at the core of the network that helped those seeking exile safely leave the country.

Suna East MP Junet Mohammed, while commenting on Karua’s warm reception during the Western campaign tour described her as a great teammate and valuable leader, adding Kenya will progress with the “best and tested at the helm.”

While the “Young Turks” went to the trenches to fight for good governance and democracy, do they still have fire burning in their bellies? Can Kenyans expect a more progressive, equitable and just country should Raila Odinga make it to State House in the August 9 presidential election?

Prof Macharia Munene, who teaches History and International Relations, avers old age may have caught up with the “Youth Turks” thus eroding any revolutionary ideas they may have harboured that could change the country’s fortunes.

“They are now old and some may be out of touch with reality. There is little fire in them,” he told The Nairobian.

Indeed, it is true that the majority of them have mellowed with time as they walk through their 60s though critics say their momentum virtually fizzled out after the 2002 elections when Orengo, Karua, Kibwana, Kituyi and Karua were appointed to Cabinet.

The enactment of the 2010 Constitution also fulfilled many of the reforms they were yearning for though the attempt to revisit the supreme law through the Building Bridges Initiative (BBI) saw many of them regroup with the exception of Karua, who even took the fight against proposed constitutional changes to court. The Supreme Court was on Thursday expected to decide BBI’s fate.

Of note, Muite has kept off major political developments, never hesitating to tell journalists seeking his voice that he is on a “sabbatical.” But perhaps, the regrouping of the “Young Turks” could be the medicine the doctor ordered for Kenya at this time in her history to allow for a rebirth. Time will tell.

Abdul charges between Sh50,000 and Sh1 million depending on the seat a politician is eyeing and he administers his medicine in the wee hours.

A trader said one container near St Bakhita on the main road leading to Mukuru slums seems unstable, and if it is not fixed, it may cause an accident.