My wife's support will propel me to Kakamega Governor- Senator Malala 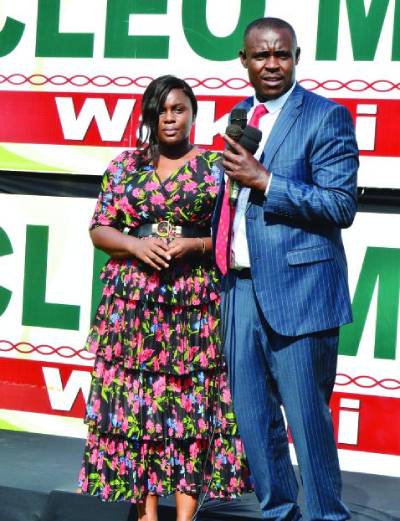 Kakamega Senator Cleophas Malala tickled his fellow politicians after claiming that he is the only politician in the country who is faithful to his wife.

Malala, who was introducing his wife Ms Caroline to ANC delegates at his Makunga home in Navakholo constituency said he keeps his words and that is why his marriage is still flourishing.

“I started dating Ms Caroline when I was in Form One and my sweet words made her fall in love with me.

“As you can see, I am a man who keeps his words and I love her so much,” said Mr Malala.

Mr Malala, 37, who is likened to South Africa’s Julius Malema, the firebrand politician, by his supporters, said he is a husband of one wife and a father of four children.

“When you get a wife, you get favour from God. That explains why my life is full of blessings.  I married her and she brought favour into my life. Through her support, I was elected the first deputy speaker of the County Assembly of Kakamega in 2013,” said Mr Malala.

He added: “Her prayers saw me elected the Kakamega Senator in 2017 on the ANC party ticket and I became the Deputy Senate Minority leader. “This year, she is on her knees again to ensure I become the next Kakamega governor,” he said.

The senator, who holds a degree in Information Systems and Technology from the United States International University (USIU) revealed that his wife comes from Bunyore in Vihiga County, just like his mother.

On her part, Ms Caroline described the senator as a loving husband and appealed to Kakamega residents to elect him as their next governor, promising to ensure they will never sleep hungry.

“When you see a mother at home, just be sure you will eat something. Even today as I host you (ANC delegates) please ensure that before you leave (you eat something). I have prepared enough food for you and nobody should go home on an empty stomach,” Ms Caroline said.

Ms Martha, the senator’s mother, told the delegates that her son is as kind as he is handsome. She said he means well for the people of Kakamega.

“My work is to pray for my son to become the next governor of Kakamega,” Ms Martha added.

The senator’s grandfather, Mr William Nzinza, while supporting Mr Malala’s bid, dismissed ODM leader Raila Odinga’s claims made last year that the senator comes from Siaya and that his real name is Mr Omondi.  “Mr Cleophas Malala is the son of Mr David Meja and his umbilical cord is buried in Kakamega County. He is from the Abalukolwe clan, and not a Luo as Mr Odinga claimed.

“That was just but political rhetoric and such roadside sentiments cannot stop him from being the next governor of Kakamega,” said Mzee Nzinza.

Yes, I was a sex worker, I want to be an MCA

"I don’t need pity. I did what I had to do. Through sex work, I have been able to take my children to school and put food on the table."

Why you're at risk of getting an STI

“The government should not keep quiet because people will use that excuse to engage in unprotected sex.”