It will shock Kenyans who believe that all it takes to join the Kenya Police Service is a set of good teeth that Zachary King’ori Mwangi joined Kiganjo Police Training College with a first-class honours degree. And in a cohort that mainly consisted of primary and secondary school graduates, King’ori shone like a lone star in a dark night. A hard worker with natural leadership skills and intelligence to match, he clawed his way up the ranks — fast.

“By 2001, everyone knew King’ori would at one point be at the helm of the police force. He was one of the smartest and effective cops. He delivered on every assignment and was loved by the chain and command in the police force,” says a  high senior ranking officer.

“If you came up for promotion and King’ori was also on the list, you knew he would be picked first. The bosses loved him.”
An exceptionally brilliant man, King’ori broke records with the police, taking only nine years from a civilian to gazetted officer (senior superintendent). He was at the top of his class in every police course.
“But things took a turn and his brightly shining star started dimming when he was sent to Mombasa as the provincial police boss in the mid-2000s.

Rubbed many people the wrong way

“At 37 he was PPO in the Nairobi area, a position usually reserved for cops who are in their 50s, while his deputy was 15 years older than him. He is one of the youngest ever PPOs in the service and is rated amongst the best when it comes to strategy and operations. However, he was ‘played by his people at the OP and police service who were uncomfortable with him,” our source, a retired top police officer reveals.

A stickler for the rule, King’ori rubbed many in the government the wrong way when, in 2013, he refused to withdraw police protection for Raila and Ida Odinga after the disputed presidential elections.
“The law required Raila and his family to be protected, and he refused, so the OP decided to cut him down to size,” our source adds.

During the vetting on November 14 2012 to pick Kenya’s first deputy Inspector General, his stint at the coast came to haunt him. Easily the best among the nine candidates who had been shortlisted for the job, King’ori had to explain to the commission allegations levelled against him.

“I have worked in Mombasa and I know there are two kinds of politics there. Kuna siasa ya ushoga na siasa za unga (gay politics and drugs). I was not in any of them,” said King’ori.
King’ori was then IG Kimaiyo’s deputy in charge of Police Reforms.

hen a commissioner asked him about a block of the apartment he allegedly owned and a Sh6.5 billion drug heist, King’ori made the commissioners laugh when he retorted, “Why should I be asked a question about what happened in Kitale? Why am I being asked questions about what happens at GSU headquarters? It’s like suggesting I want to be the Pope, yet I am not even Catholic. About the flat in Zimmerman, I don’t even have a relative there. If you think you are my tenant in Zimmerman, then don’t pay rent.”

He further added that there are allegations that he owns a fleet of tracks, prime land and a beach hotel.
“There is a businessman who is called King’ori and owns buildings which people always thought belonged to me. I don’t own the patent to the name King’ori.  I even called that businessman to confirm,” said King’ori. The commission exonerated him after allegations were unsubstantiated by the complainants.

A strict, no-nonsense cop, King’ori is only one rank away from holding the coveted Inspector General of the Police position. But a source close to him says he has never spoken about his ambitions, and brushes away the question, even with aggression bordering on anger anytime he is asked.

“He is a very generous man, even to strangers, and people around him always take advantage of his generosity.  He is a suave businessman, but his juniors tend to fear him because he is very strict and has no time for excuses.
“He also doesn’t speak about his family, work or wealth. He is a very cagey person. In the presence of people he doesn’t know, he doesn’t speak much. He will attend a function and sit or stand at the back of the congregation. Be it a wedding or a funeral. He never likes his presence to be recognized like other VIPs and never speaks in public,” says a civilian source who has had close interaction with King’ori for years.

The only time King’ori spoke in public was during a constitutional forum at the Bomas of Kenya as police spokesman, the vetting sessions before the Kavuludi led Commission and at his wife’s burial in February 2019.

In a moving tribute to his wife Mercy Wangiri who had succumbed to cancer, King’ori who was then the Kiganjo Police Service College commandant showed his emotional side when he tearfully recounted how Wangiri who passed on while working as a lecturer at Nyeri National Polytechnic waited for three years before he could afford an engagement ring.

“You tolerated me when I lived in servant’s quarters that had no toilet, which forced us to trek three long kilometres to the nearest bar just to empty our bowels,” said King’ori.

Ever a secretive man, photography was barred at the funeral and politicians were only given a minute each to address the mourner, but steer clear of politics. But what cut to the point where thugs would invaded his rural home, and in a clear ‘we don’t care who you are’ attitude, hold his housekeeper hostage for eight hours, feast on the food available and ransack his house for valuables, stealing his guns for good measure?

And this only two months after King’ori was in the eye of the storm after he “accidentally” rammed two pedestrians on Lang’ata Road when he was “rushing a pregnant woman to hospital”.
Mwangi, who denied driving on the wrong side of traffic, claims the accident occurred as a result of the pedestrians’ miscalculation.

“The two pedestrians dashed across the road, catching me off-guard. Nevertheless, I tried as much as possible to slam the brakes to avert what would have been a fatal crash,” he said.
Following the incident, Mwangi and a female passenger were roughed up before being rescued by traffic police on patrol.

Speaking to our sister publication The Standard, Lang’ata OCS Chief Inspector William Matu said that no person had come forward to file a complaint against Mwangi.

King’ori Mwangi, a top gun for whom the sky was the limit in law enforcement, is currently attached to the Ministry of Foreign Affairs — pushing paper. That thugs could brazenly raid his home, that boda boda would have lynched one of Kenya’s most decorated police officers must rank as one of the biggest absurdities of our times.

If you are in my car, your space is strictly the seat you occupy. Don’t open the glove compartment and read the papers you find there.

Babu Owino, the MP linked to the alleged shooting incident which resulted in DJ Evolve’s hospitalization and paralysis, visited with the family. 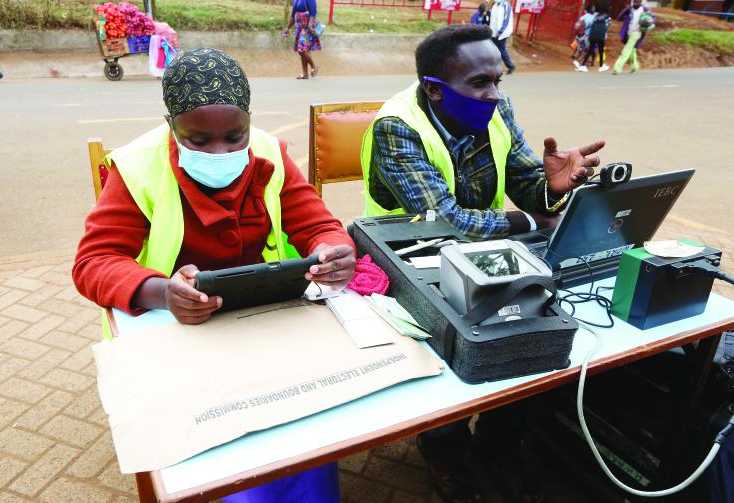 By Eric Nyakagwa and Phares Mutembei | 5 hours ago