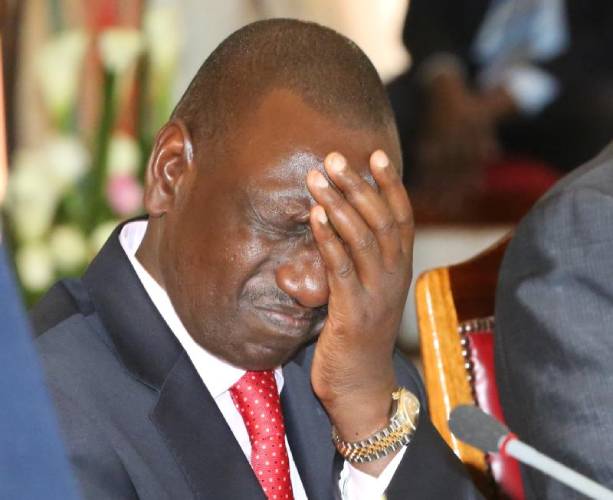 A day after the Independent Electoral and Boundaries Commission (IEBC) confirmed William Ruto as Deputy President-elect following Jubilee’s victory in the 2013 elections, the man of God went for prayers at a church in Karen, Nairobi.

When he was given the microphone to address the congregation, his eyes welled with tears. He choked on the microphone and overcome by emotions, the deputy president wept.

“I have not cried like this for many years. The only time I remember crying like this was when I was a little boy and my mother is here to attest to that. My wife knew me as a strong man because she had never seen me emotional like this,” he said. His were the tears of joy, even disbelief, for their road to the Presidency with Uhuru Kenyatta had been the uncanny run of two underdogs punching above their weight against an incumbent Prime Minister. This in a boxing ring filled with landmines from The Hague, the threat of cuffs, years in a foreign jail, disdain from the West and the constant menace and glare of prosecutor, Louis Moreno Ocampo.

A devout Christian, the man from Sugoi neither drinks nor smokes but spends weekends in churches, praising God and contributing to harambees.

Yet, no man has been sinned upon more. Of Kenya’s 10 deputy presidents, Ruto has spent the most time defending his property, reputation and character in court and elsewhere.

Just a few months ago, the police reopened investigations into an old case involving Ruto over the controversial sale of land to a State corporation.

The Directorate of Criminal Investigations (DCI) opened fresh investigations into claims of conspiracy to defraud the state agency of Sh272 million in a land deal. Ruto and two co-accused, as well as their company, Priority Ltd, had in April 2011 been cleared for lack of evidence.

In his ruling, Nairobi Chief Magistrate Gilbert Mutembei said the prosecution had failed to prove that the three received the money from Kenya Pipeline Company.

Njue, the key witness who never turned up in court to testify, had in July 2009 been appointed by Ruto, then minister for Agriculture, to the board of trustees of the Coffee Development Fund.

On January 20, 2015, teachers and children at Langata Road Primary school returned from Christmas holidays only to find the school playground had been fenced off and was being used as parking space for the neighboring Weston Hotel. The children took to the streets to protest the injustice but were repulsed by teargas and police batons. Ten kids were admitted into hospital.  The school had owned the parcel of land since 1972, and the nearly 1000 pupils now had no playground.

The case later morphed into a spaghetti bowl of lawsuits pitting Kenya Civil Aviation Authority, who claimed the contested land belonged to the agency, and Priority Limited which claimed to legally own the land that Weston Hotel sit on.

In March this year, Ruto lost the first round of a court battle filed by the Kenya Civil Aviation Authority (KCAA) on the land where his Weston Hotel stands.

The hotel said KCAA had defied National Lands Commission (NLC)’s orders to let Ruto compensate it, arguing that KCAA ought to abandon its quest to recover the land and instead accept payment.

Ruto’s decision was a departure from the initial defence that the hotel was the legitimate owner of the property. Ironically, Ruto had, through his lawyers, denied being the owner of Weston Hotel.

In the aftermath of the worst post-election violence that the country had ever witnessed, Uasin Gishu farmer Adrian Muteshi lost a 100-acre farm which was later acquired by Ruto. The farmer successfully sued Ruto for land grabbing and was awarded Sh5 million in damages and the DP ordered to vacate the land. In his court papers, Muteshi said he acquired the land in Uasin Gishu County from a white settler in 1968 and was issued with the title in 1989. It was his home for 39 years until 2007 when he fled following a disputed presidential election.  Months later, Muteshi returned to his farm only to find Ruto, then Eldoret North MP, had taken over his property.

Away from the corridors of local courts, Ruto is the only Kenyan Deputy President who has had to face an international court. In December 2010, Ocampo, the prosecutor of the International Criminal Court (ICC), summoned six people, including Ruto, over their alleged involvement in the 2007–8 electoral violence. Ruto was charged with three counts of crimes against humanity. In April 2016, the prosecution of Ruto was vacated by the ICC.

Back to local courts and land matters aside, Ruto has also been sued on matters touching on his love life. Four years ago, a child upkeep case was filed in the Nairobi Children’s Court by a woman who claimed the two had a relationship that resulted in the birth of a girl.

“After the defendant assumed the office of the Deputy President of the Republic of Kenya, he discontinued offering any form of monetary support to us, leaving us in abject poverty,” the woman claimed. But in a response to the matter through his official Twitter handle, Ruto told unnamed persons to keep off: “My 11-year-old-child (name withheld) is well catered for including her education in a private boarding school. Politicians and busybodies should keep off.” The matter was settled out of court.

An opportunity for Ruto to sue the government came in April 2020 when a 1,600-acre stretch of land in Ruai which has long been associated with him was repossessed by the government. The land owned by Renton Company Limited had been earmarked for expansion of Nairobi’s main sewerage plant. Patrick Osero, who co-owns Weston Hotel with Ruto, termed the eviction of Renton Company from the contested property as malicious.

“He will not contest the repossession. He (DP) has a legitimate title to the property in his house. How can anyone lay claim to it?” Osero posed.

Tired with the constant attacks on his integrity on social media by activists, Ruto took an unprecedented step and in October 2016 sued Boniface Mwangi because of incessant tweets questioning his integrity and character. Ruto moved to court under a certificate of urgency, seeking orders compelling Mwangi to retract the “defamatory” tweets.

“We want Mwangi to be compelled to retract and delete the said tweet and apologise in all print and electronic media,” read the court documents which also sought orders to have Mwangi restrained from tweeting any defamatory materials against him and to pay damages for libel.

Ruto’s lawyer wrote to Mwangi demanding an apology within seven days, but the activist did not apologise. But Mwangi’s lawyer wrote back, saying he had not defamed the DP because he had no reputation to protect. Mwangi has never heard from Ruto’s lawyers since.

Instead of throwing a tantrum, the best thing we did was hold a friends’ baraza and console each other as we laughed it off.