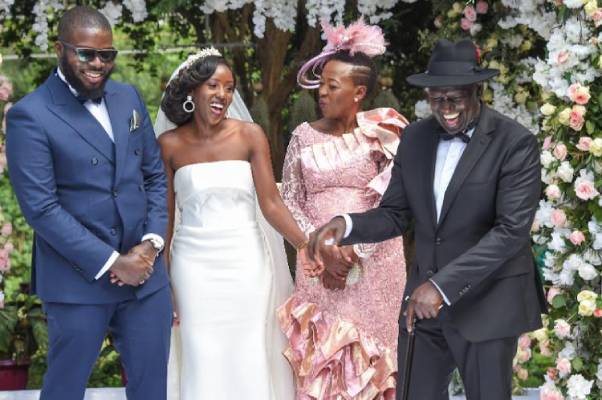 2021 has been a year of pomp and colour. For some, it was also a year of love. Celebrities were not spared by cupid, either, as some found love and walked down the aisle, often in secret. Here are ten celebrities who tied the knot in 2021 :

Gospel musician James Muhia alias Mojishortbaba walked the love of his life Nyawira down the aisle this year. The 'Vimbada' hitmaker shared photos of him and his wife donning wedding regalia. He shared the photos on Instagram with the caption:

"He who finds a wife finds what is good and receives favour from God.

Deputy President William Ruto's daughter June Ruto got married to her Nigerian beau Dr. Alexander Ezenagu. The wedding ceremony was held in Karen and was attended by close friends and relatives. June's husband  Ezenagu is a professor of law at Hamad Bin Khalifa in Qatar.

Media personality Anita held a lavish white wedding with her caucasian fiancee Barrett Raftery in Nanyuki. The white wedding happened  few days after they held a traditional ceremony. The private ceremony was attended by very close friends and relatives. The media personality shared a video of her wedding and photos on her social media pages.

Celebrated model Pesh tied the knot with her longtime fiancee Dan Magenda. The private ceremony happened a few days after she said yes to Dan's proposal. The celebrated model took to social media to share photos of the exquisite purple-themed wedding.

Chairman of Mafisi SACCO Wilson Muirani aka Jaymo ule msee wed his actress girlfriend, Catey Fortune. The traditional wedding ceremony came as a surprise to Netizens. Jaymo shared photos of their beautiful traditional ceremony online. The two love birds met in 2015 and have been working together in their skits.

Former Inooro news anchor Muthoni wa Mukiri was wed to Isaac in a Kikuyu traditional ceremony. The red-themed traditional ceremony was attended by media personalities like Shix Kapyenga, Teacher Wanjiku and Lilian Muli among others. The two lovebirds have dated for one year and Isaac proposed to Muthoni after 8 months of dating.

Esther got married to the love of her life Kibunja in a civil wedding that was attended by close friends and family. The wedding raised eyebrows online since it only cost 60k. Netizens took to social media to celebrate the couple for the affordable and beautiful wedding.

Popular Instagrammer Manzi wa Kibera was wed by Obidan in a lavish and lowkey wedding ceremony. The socialite was ferried by a 22M limousine and donned 50K wedding gown. Obidan Dela is a popular DJ and fashion enthusiast. Netizens however speculated that the two were chasing clout since they claimed to have split a few days after their big day. Did the wedding go down?

Rwandese singer Medard Jobert Ngabo tied the knot with his lover Mimi Mehifra in a beautiful ceremony in Dallas,  Texas. The beautiful ceremony was held on Saturday, May 22  2021. It was  graced by Rwandese celebrities like Miss Rwanda 2009 Grace Bahati and poet Malaika Uwamaharo.

Gospel artist Gloria Muliro: "Let's follow all Gov't directives, but above all trust in God"

Ex-cop gets 40 years for killing colleague over disagreement

The accused used excessive force against a compatriot police officer even though the insult might have reduced his self-esteem and reputation.

Independent or not, you need a man

When we step back from our hard stands of ‘I do not need a man’ then we will realize just how much we need them for the society to be complete.