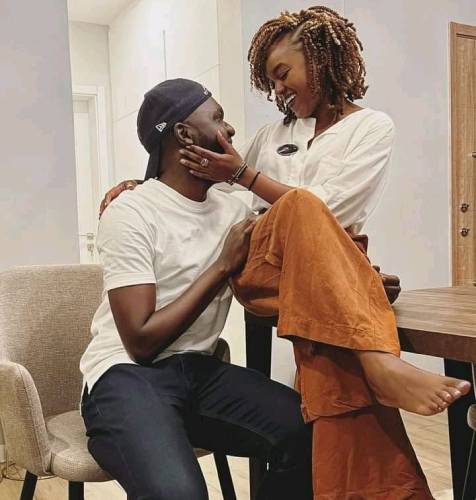 Popular Journalists Larry Madowo and Edith Kimani could be the newest lovebirds, judging by their suggestive photos. On her Instagram stories, former KTN presenter Edith Kimani posted a GIF of herself kissing the CNN news anchor on the forehead.

The Deutsche Welle News anchor also shared a flirtatious photo of the two. Larry Madowo posted Edith's photo on Instagram and captioned it with love emojis.

Their posts sparked dating rumours among netizens. Their fans unearthed sensual photos of the two that date back to 2014. If the photos are to go by, the duo could have kept their seven-year relationship under wraps.

Kenyans on Twitter( KOT) could not keep calm after seeing Edith's and Larry's photos.

Most remarked on Larry managing to 'climb the mountain'.

"I hope the Larry Madowo and Edith Kimani manenos is real," Twitter user @NahashonKimemia said. "They are great people as individuals. They would be incredible as a couple. It would also be a lesson to all men, mvumilivu hula mbivu. Usikimbilie mali yeyote kwa sababu uko na pesa. Ng'oja hadi upate mali safi."

It still baffles me how Larry Madowo has managed to climb the mountain, but Raila Odinga is still struggling," joked @MbuiMumbi. "How?"

Larry Madowo who is currently in the country, is a CNN international correspondent. The Kenyan journalist formerly worked with BBC as a correspondent and a BBC World News America presenter.

On The Record: Aden Duale on the spot!

On the record:Governor Evans Kidero and the Nairobi floods

Analysis Of The Baringo Killings

Life creates the greatest humans by breaking us first, allowing us to heal to prepare us for the next relationship.

Strugglers Movement vow to give Kenyans plan B

Strugglers Movement shall enrich the perspective of Kenyans on the politics of ideology free from tribalism, class, division, negative ethnicity.