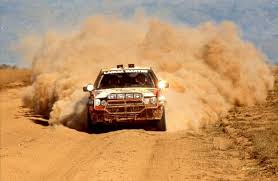 Despite hitting a wildebeest and damaging the front left of his Top Fry Mitsubishi Evolution 10,  Carl “Flash” Tundo racked up an emphatic hat trick following victory in the KMSC Rally in Machakos County yesterday.

Carl, the five times Safari Rally winner and navigated by Tim Jessop Carl, had his campaign effectively sewn up when his season closest challenger Baldev Chager ran into mechanical gremlins.

“It feels great to complete a hat trick of wins. I’m super happy, but upset that Baldev Chager couldn’t finish after leading most of the rally. We now need luck and continue finishing events.”

Chager, who led the rally with 1.30 minutes but victory appeared too close yet so far when his Evolution developed engine failure.

“We had a fantastic run all morning. The first three stages were awesome and the car seemed go really well  and as at the fourth stage we were enjoying a 1.30minutes lead only for the strange engine failure setting in. We have never experienced this kind of thing before in this car but that’s rallying,” said Chager.

Second and third were the Skoda Fabia R5s of the reigning African champion Manvir Baryan and Onkar Rai as Eric Bengi in a Subaru N12.

“Its unfortunate to have your teammate going out but a good day in the office in the afternoon. First stage we lost lots of time due to wrong notes. Second stage we experienced overheating problems,” said Charger. [Standard Sports]

Incidents of child defilement and trafficking have become common and it is important that your child knows how to protect themselves.