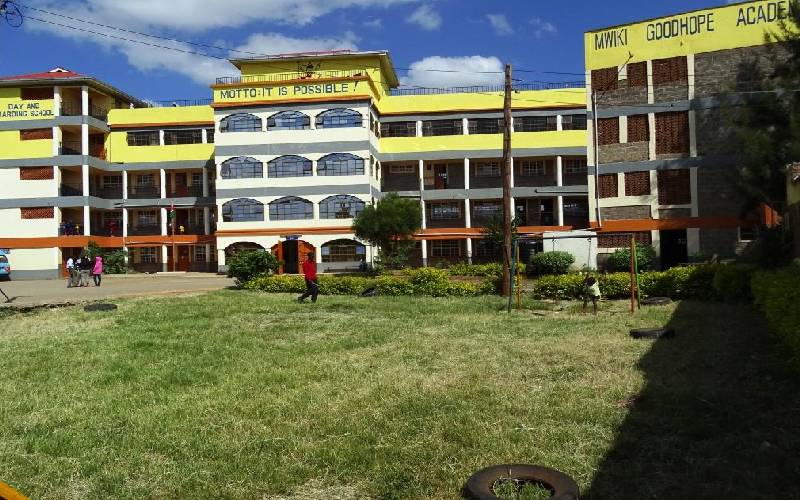 They say that tough times never last but tough people do. And no one knows this better that RoseAnn Maina, the principal and founder of Mwiki GoodHope Academy (MGA). Today, the school is a raging success, and in 2015 national exams, it was ranked top in Nairobi. They also produced the third-best student nationally. In 2019, 40 out of the 70 candidates had over 400 marks out of 500. The school has expanded to two other centres and a college. But it took toiling to get to this elevated place. RoseAnn shares her journey.

You had a brainwave that has cemented the school’s success. Tell us about that?

This was last year when schools were shut down due to the pandemic. We introduced mother tongue classes that went viral on Facebook. We figured there was no better time to help the kids get in touch with their identity and culture than when they were around their parents. We even have a mother tongue class for adults. I must say it was a resounding success.

How did this journey begin?

When I obtained my Bachelors in Education from Moi University, the Teachers Service Commission posted me to Kisii but I declined the offer because I couldn’t be that far away from my family in Murang’a. So I decided to look for a job in Nairobi and got employed in a private school, where I earned Sh 4,000 a month. This is where the entrepreneurial seed was planted.

Up until that moment, I had never thought that education could be a private business. The gentleman running the school was doing so well that he went on to start a boys’ school and a teachers’ college thereafter. I felt motivated to do the same. So with a friend, we identified a place where we would start a kindergarten and we agreed to ask our parents for a little cash injection to secure the place. That is how we met our first hurdle.

Our parents were not crazy about that idea. They thought that at 24, we ought to calm down and first get husbands. Disheartened, we abandoned the idea — at least for the time being.

Luckily, I got a better-paying job and there I met my husband and settled down. It was after my two-year contract ended that I thought again of trying to go it alone. Well, I had no money to start a school, which is very capital-intensive but I wanted to start a business. Thus, I formulated a plan.

I started a shop which grew from a humble mini-mart to a big supermarket, getting Sh5,000 in profit a day. I put back every cent into that business and it grew tremendously. But as the shop grew, so did the target on my back. A burglary incident made me close it down. The thief was almost lynched and I was uncomfortable with the bad energy surrounding the event.

With Sh50,000 in savings, I went back home and started thinking about starting school. I approached my mother again. She had some property with a few rooms. She offered me two rooms — one as a class and another to use as a utility room.

How did that go?

In September 2001, I used my savings and started school. I  got furniture and utensils at my house. Every day, I would go door-to-door marketing my business. When we opened, only one student, Kevin, came. We charged only Sh1,500 a whole term while the only teacher I hired was getting Sh3,000 a month.

What was the hardest thing you faced then?

I was targeting the poor children and in 2002, Kibaki’s government introduced free primary education, also targeting the same group. I lost two kids to public schools and the only ones that would come could not afford even desks and were really destitute, without even lunch money.

That year, my only student left. I was not employed, the business was haemorrhaging money and I had walked miles looking for new students.

When did things start looking up?

In 2003, I got 10 kids but they were a mix of different ages so I had to get an extra teacher. I would get money from my Saccos and Chamas to pay the teachers. That was my situation all year. The following year, I got 24 students and 50 the next. We toiled for five years before we even hit 100 students. At some point, I was so overdrawn, I had to go back to TSC for a job.

In 2007, as we geared towards the KCPE year, I knew there was much work ahead. A school is judged by its performance in the national exam. I had a very small class of 100 so I worked to find a professional teacher to prepare them effectively.

Did they ace the exams?

Not really. At the time, I had a turnover of Sh1 million but the school performed poorly and improved slightly the following year. I needed to make a change but did not know what. I had done everything. That is when I attended a fully sponsored woman in business training. For 6 months, I learnt everything I was doing wrong. I was losing teachers every term and human resource was a mess. Our communication was also lacking.

I did my first business plan as part of the course. I wanted to write my business plan myself and internalise everything I wanted for my school. I did and redid it for several nights until it was done. When I presented it to my professors, they gave me a standing ovation and I knew this was it.

The course was an eye-opener. When I returned, I implemented every single thing in my plan. I had not even been aware of how I would approach financiers and finally, I knew how to get financing and that is what helped me put up the building that we sit in now. I built classes and a boarding section big enough to accommodate double the capacity. The next step was to find students to fill that space. MGA even started buying buses and training staff especially on our original mission which was to become the leading school in Kenya and beyond. I wanted the teachers to believe in themselves and in turn motivate the children too.

Somehow we survived. Happy to say I did not lose even one teacher in 2020. Immediately schools closed, we started online classes. When I ran out of cash to pay teachers, we started a feeding programme. For the teachers not engaged in online classes, we would give them food for their families.

For the other members of staff who were in Nairobi, we housed them in the empty classrooms. We even did the ‘Jerusalema’ challenge to boost their morale and ensure they felt like part of the community.

What I have learnt about running a successful business:

2.     You have to believe in your dream. I named the school Good Hope because that is the only thing I had. I had no money, no connections, just hope that all things are possible.

Previous article
Kenya determined to conclude trade deal with the US, President Uhuru says
Next article
IDPs forcefully move to land after 13-year wait for the state

What losing my job taught me…