Stereotypes couldn't hold me down 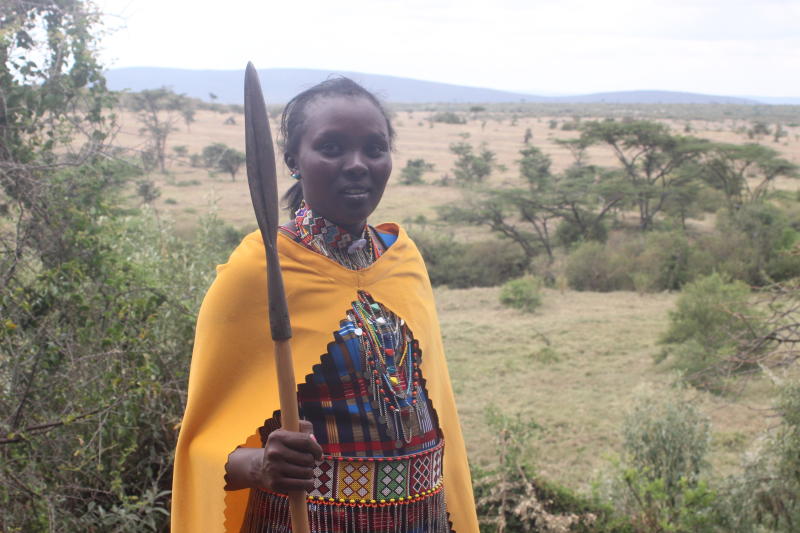 Agnes Kelero peers through the open plains of Naboisho Conservancy in the greater Masai Mara region like a lioness ready to pounce.

Bedecked in resplendent Maasai regalia, she looks like royalty, an African queen surveying the expanse of her kingdom. In her right hand is a spear, but as a Maasai woman, the weapon is neither to hunt nor protect the community. Those roles belong to the men. The spear is a symbol of confidence in her role as one of the few women safari guides in Masai Mara.

And what knowledge about the wild she has! She is very careful when pronouncing the Latin names of almost every plant here and explains the symbiotic relationships that exist in nature with the ease of a seasoned botanist.

“Did you know the tiny ants in this whistling thorn tree can scare away the tallest animal on earth?”

“The ants build their homes inside the hollow pods of the whistling thorn tree and when a giraffe approaches with the tongue, it is pricked by the ants and flees. By protecting the tree, the ants in turn get the sap and a home.”

I regretted not paying much attention in my Biology classes.

In the hot midday sun, I follow Kelero as she points out the droppings of various animals, explaining how the different animals use these droppings to mark their territory.

I am shocked when she says the local community has used dry elephant dung to treat various ailments. She notices my consternation. “Yes, that is correct,” she emphasizes. “You see, an elephant eats so much vegetation, much of which remains undigested and has medicinal value.” She says the same of the many trees, shrubs and even the small plants at ground level. “Almost everything in Maasailand has some useful purpose,” she says.

Kelero is a product of the nearby Koiyaki Guiding School, an institution in the Mara that has shaped the careers of top tour guides here. She honed her skills under the tutelage of other renowned guides such as Jackson Looseyia of BBC’s Big Cat Diaries.

But the 25-year-old mother of one almost never became a tour guide. Were it not for her mother, her dreams would have been buried in the dusty plains of Aitong, her home area, just like those of hundreds of girls in Maasailand who get married off at a young age.

She knows of many girls from her village who, against their will, were married off and denied the chance to go to school or find work. Kelero had to stand her ground and follow her passion.

“My father thought it was a waste of time to educate a girl who would one day leave the home and get married. But my mother insisted that I must get a good education. For her persistence, she was chased away from home,” says Kelero.

After Class Eight however, her mother too found it hard to pay for her secondary school education. She only had enough money to see her daughter through Form One.

A Norwegian visitor in the area heard of her plight and promised to sponsor her education. She says he sent Sh40,000 through local tour guides for onward transmission to Kelero. But the guides had other plans with the money.

“I only got Sh8,000 from them. They also refused to give me the email contacts of the Norwegian,” she says. But though the help of other well-wishers, she finished her school in 2014 after which she enrolled at Koiyaki Guiding School.

Upon graduation in 2018, she was posted as an intern at Ol Seki Hemingways Mara, a high-end safari camp.

Three years on, Kelero may be an accomplished guide, but in the male dominated profession, stereotypes are never too far away.

Male guides would bully her, wondering how she could be a good guide “just because I was a woman.” In Maasailand, especially for a woman in a male-dominated profession, the pressure to perform is just too high.

“Men, and, sadly some women, think I am not good enough to handle certain rough situations in the midst of ferocious animals. They wonder ‘how can a woman carry jacks, spanners, and change tires?’ Some men think I am out to take their jobs,” she says.

But it is the scorn from women that gets to her. She recalls an incident at a local market where some women refused to board her vehicle out of fear that she might not be able to control the vehicle.

“Those standing on the side of the road would scream, giving me all manner of directions. Don’t hit the tree… there is a child on the side… look out for the calf… and on and on. They would not do so for a man,” says Kelero.

But such stereotypes, Kelero believes, will abate as more women take on such roles. This is the message she passes on to young girls whenever she gets a chance to talk to them. Through young women like her, the local community has started to se the fruits of educating girls.

“Imagine if every Maasai home has a well-educated girl. Such stereotypes would not exist. That would help fight poverty. Buying time for education will save the girls from early marriage which contributes greatly to prevailing high poverty levels,” she says.

To the girls with similar ambitions, Kelero has a message for them: “I would tell them that tour guiding is a good career path. True, they will face several challenges but, with determination, they will make great guides. They should also never let anyone tell them that there is something they can’t do.”

For her embodiment of passion, resilience and warm personality, Kelero shines as a beacon of hope for young Maasai girls hoping to cast off the seemingly unbreakable cultural chains.

Camp in path of wildebeest responds to public fury