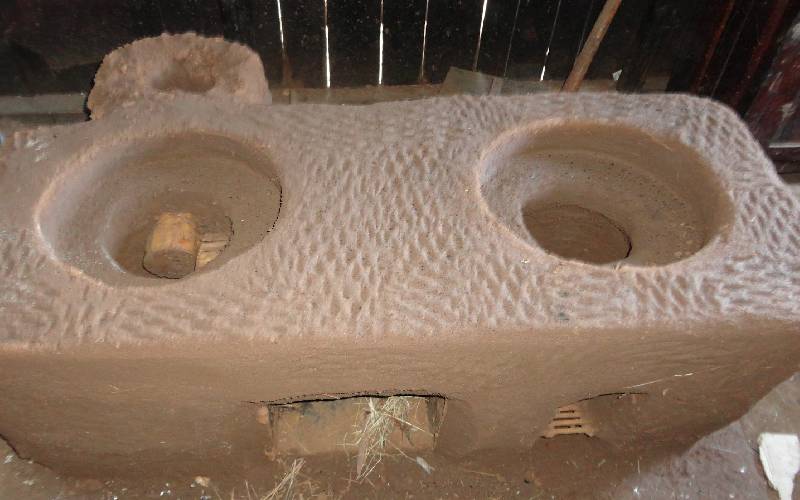 Many people who grew up in shags have fond memories of the village kitchen. It was the most important place in the homestead, where the matriarch of the home would whip up hot, savoury dishes for the family. The kitchen was also the most dreaded place, especially when it was time to light the three-stone fireplace. Smoke would billow through the windows and up into the sky.

For the person lighting the fire, it would mean red, bloodshot eyes flooding with involuntary tears and a light stream of mucus running down the nose. This is Nestone Wanyonyi’s most profound memory. Growing up in rural Bungoma, Wanyonyi saw his grandmother struggle to light these teary fires every mealtime.

“I was brought up in the village where firewood was the only source of fuel. I used to fetch firewood in the forest since women and children are the main collectors of firewood. We spent hours daily cooking over smoky embers,” Wanyonyi said adding: “My grandmother developed itchy eyes and breathing problems every time she used the kitchen. The ever billowing smoke became a signature tune for mealtime.”

Lucky for him, he left his rural home for Nairobi after enrolling in the National Youth Service. There he studied for a diploma in electrical engineering and later joined the University of Nairobi for further studies.

Like every young adult, Wanyonyi had big hopes for the Kenyan dream – get a job, build a house, buy a car, settle down happily ever after. Except that it did not come to pass, not that way at least. After graduating from the university, he spent several months tarmacking unsuccessfully for a job. Dejected, he went back home to the very smoke-filled kitchen he was trying to escape all his life.

This would, however, change sometime in 2013 when Wanyonyi bumped into Integrated Association of Kenya, an organisation that was training youth on how to make energy-saving jikos.

Wanyonyi enrolled for their two-day course and decided to give their business idea a chance. What started as a trial-and-error has turned out to become a successful venture. With a startup capital of Sh10,000 from his farming hustle,  Wanyonyi opened his business of making improved energy-saving jikos.

His knowledge and expertise in engineering came in handy and he constructed two trial jikos for his grandmother. The change was immediate. The new jikos did not emit clouds of smoke and food was ready within no time.

“Since I installed modern jiko, the change became evident to everyone. My grandmother’s miseries ended, she spent a short time cooking and saved a lot on firewood. This was my turning point,” Wanyonyi told CityBiz.

Word of the new magic jiko spread like bush fire and Wanyonyi started getting orders from his mother’s chama networks and neighbouring schools.

“Orders started coming in even beyond the county. Nowadays I get calls from across the country to go and make the jikos for them,” he said.

With time, Wanyonyi has made improvements to make the jiko more efficient. The current model is basically a stove made from clay bricks, sand, fire-proof cement, lime grey, red oxide and liners. It is then installed permanently in the kitchen and is designed to use both firewood or charcoal depending on individual preference. By use of the ceramic liners, heat is retained in the jiko, which can be used to cook more than three meals in one sitting.

“The energy-saving jiko not only saves on fuel but also retains heat, cooks faster and has significant smoke reduction as compared to the three-stone fire jikos,” he said adding that the set-up makes the kitchen look neater and cleaner.

With every jiko, Wanyonyi guarantees efficient service of up to 10 years. The production cost for one unit of the domestic bioenergy jiko is Sh7,000, which he then sells at Sh12,000 per unit, leaving him with a clean Sh5,000 profit per unit.

Institution boilers, which are larger in size, range from Sh40,000 to Sh60,000 per unit. Wanyonyi says the biggest jiko can be used with a 100-litres capacity sufuria. The 35-year-old father of two says demand for the jikos is very high, especially after the government ban on logging. Today, Wanyonyi says he has achieved the ‘Kenyan dream’ only in a less expected way. With earnings from his venture, he has set up two homes – one for his family and another for his parents and is also educating his children comfortably.

The only challenges he has to deal with are high operational costs, including procuring raw materials from Nairobi. He also struggles with lean financial muscle, which has limited him from hiring employees to reduce the workload.

“I envision myself doing this work on a large scale in the near future,” said Wanyonyi, adding, “For this, I will require new technology and expertise. As soon as I acquire a modern machine for mixing raw materials, then I will have realised my dream.”