Why does my back hurt? 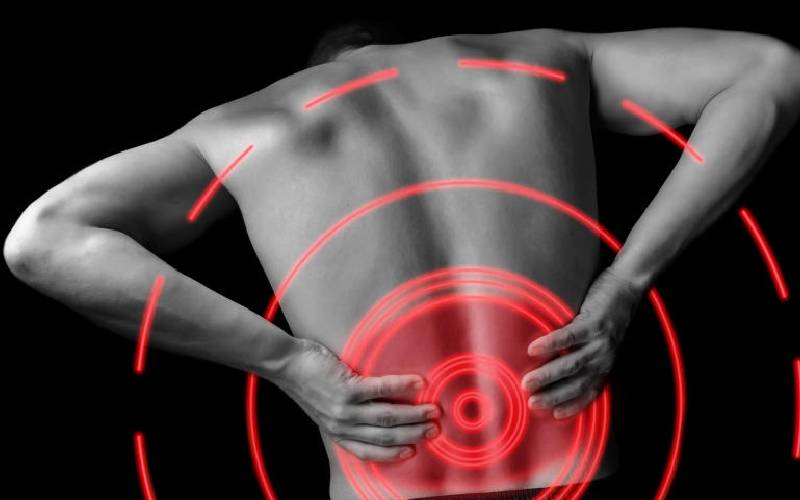 As you get old, this may come with feeling some pain in the lower back. This is because the discs in the spine, which act as cushions between the bones have become worn out. And they don’t repair themselves because not enough blood gets there. But you don’t have to be old to experience back pains when you sit down, it could be all due to a muscle strain brought about by bad posture. Or a herniated disc. This is when a disc in your spine has been pushed out of its normal shape. This can be brought about by natural aging, a fall, or lifting heavy objects improperly.

“When lifting something heavy, you are supposed to flex your knees like you are squatting so the weight is distributed properly then lift the weight,” he advises.

Do not just bend your back and lift, as that will hurt your back.

Pregnancy and postpartum back pains

Many of the patients physiotherapists see for back issues include pregnant women and mothers. The increased weight and the further looser ligaments supporting the spine, can cause back pains.

“When one is pregnant, a hormone known as the relaxin hormone is produced that loosens ligaments to prepare you for the oncoming labour. But this can also make you prone to injuries because ligaments are responsible for providing stability,” says John Muma a physiotherapist. A drug free approach is used to treat these back pains. “There are some exercises that we usually teach the pregnant mothers. We also give them back massage to ease the tension.”

However, back massages should only be done by a licensed therapist and under approval by your doctor because some underlying conditions like blood pressure complications could be made worse by a massage.

Most times, the back pains will go away, after the relaxin hormones subside in the body. Other times, the pains will linger on, sometimes even years later.

This could be caused by various factors:

· If you are obese or overweight

Wallet in the back pocket

For some men, slipping the wallet in their back jeans pocket is an unconscious action. An action that causes pain over time. “Sitting on the wallet causes an ‘unlevelling’ in the hips and puts pressure on your lower back. It may lead to a condition we call piriformis syndrome,” says Muma. Piriformis syndrome is a condition in which the piriformis muscle, located in the buttock region, spasms and causes buttock pain.

Additionally, having the wrong pillows could cause your spinal health some grief. If your pillow is not supporting your head so that your spine maintains a straight line when either lying on your side or your back, then you are setting yourself up for chronic neck pains and headaches. A pillow that is too flat will cause the head to drop lower than the spine creating pinched nerves, and one that is too high will cause the head go above the rest of the spine creating muscular tension and lead to degeneration of cervical discs. “I recommend a contour memory foam pillow for general head and neck support to most of my patients,” says Dr Angira.