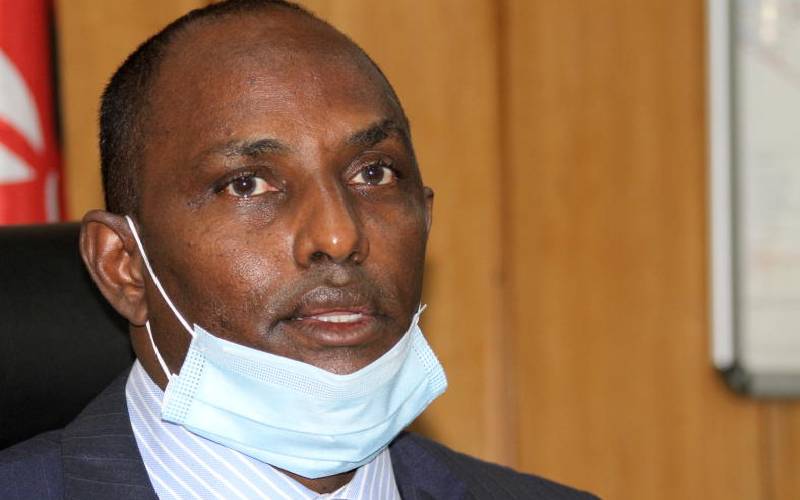 Budget Day has in the past been marked by pomp and colour.

It is the one day in the calendar that Kenyans wait anxiously - glued to TV screens waiting to see what Finance Ministers might say or not say.

Delivering the Budget Speech in Parliament could very easily see the cost of that day’s evening meal or transport go up.

While this has changed over the last decade, and the Budget Speech watered down to a statement, Treasury Cabinet Secretary still has some clout and the day is usually marked by some degree of flamboyance, including a photo shoot outside the Treasury Building with the CS holding the briefcase and the short drive to Parliament.

All these culminate into the speech where the Treasury boss tells MPs (and Kenyans) how his spending and revenue-raising plans for the next financial year.

This year, however, pomp and colour or not, Ukur Yatani (pictured) will deliver his Budget statement at a time when everything appears to be going south. It will be Yatani’s first budget, having been named acting Treasury CS in July 2019, and confirmed in January this year. 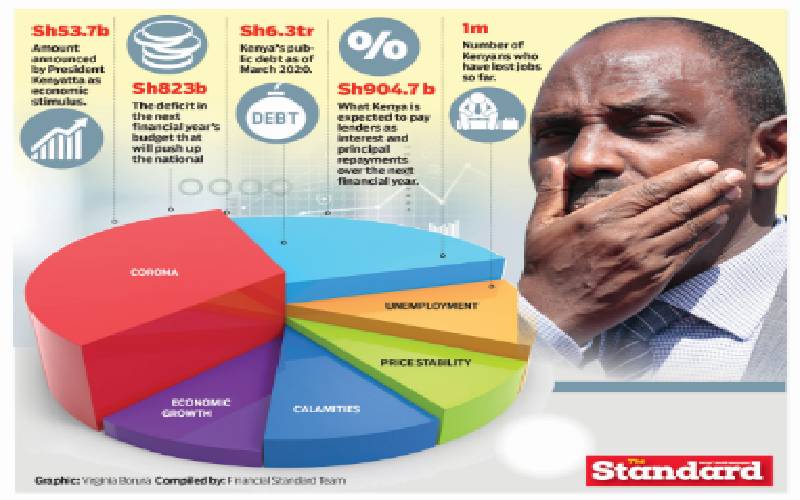 The coronavirus pandemic is perhaps Yatani’s biggest headache in his first budget. The disease has not only hit tax revenues as Treasury gives Kenyans tax breaks to enable them makes ends meet, but also resulted in more funds being set aside to fight the pandemic - directly, as well as through economic stimulus packages, which require money, and that what Treasury does not have.

The disease is also wreaking havoc on the jobs market, with hundreds of thousands of people losing jobs and small businesses shutting down.

It is projected that the worst is yet to come as more firms rationalise their personnel and entrepreneurs close businesses owing to a mix of factors including a decline in buying capacity and lack of credit.

And the virus is likely to worsen the challenges that the country faces, including food security and the debt burden that has grown astronomically in the recent past - making everyone question whether Treasury has been borrowing responsibly.

Covid-19 has had a devastating impact on the Kenyan economy and what the country has experienced could just be a start. The worst could be coming.

And no one could be more worried about the effects of the pandemic than Yatani. He has to look for money to fund emergency response while forgoing tax revenues by giving Kenyans tax breaks, and in turn, expecting a major shortfall in revenues next financial year.

As businesses slow down owing to measures put in place to curb the spread of coronavirus, the economy will take a hit, growing at a lower rate. Treasury has projected a 2.5 per cent growth rate, although dismissed as very ambitious.

The International Monetary Fund (IMF) has revised Kenya’s economic growth projection downwards to one per cent for this year. The government has already dug up money from its coffers to give to private sector players to enable them stimulate the economy, including the recent Sh53.7 billion funding.

However, as much as Covid-19 is a headache to Yatani, he is also getting a beating for not giving it adequate attention in the next financial year’s budget.

The Parliamentary Budget Office (PBO) noted that while the disease is a threat, Treasury has taken it as ‘business as usual.’

PBO noted that one of the areas where Treasury ought to have increased spending was in the Health Ministry and stimulus packages.

“The Covid-19 pandemic is arguably the single most important parameter this year, with the capacity to significantly and adversely affect economic performance and the outlook of various economic indicators,” it said

It added that what was initially a health crisis has morphed into an economic one and threatens to become a humanitarian catastrophe.

“Importantly, the economic crisis may outstrip the health crisis as hopelessness grips those who lose their jobs have nowhere to run to. Thus, the budget needed to have been prepared in an extra-ordinary manner to take care of the vulnerable of our citizenry,” said the PBO in a May 2020 report.

“The national budget must play its part. It is time for an economic stimulus through the budget… The tone of the 2020/2021 budget remains ‘business as usual’ despite the highly unusual environment the country is currently operating in.”

Debt and deficit and payments due

When Treasury prepared the budget before Covid-19 became a major concern locally, it expected the deficit for the 2020/21 financial year to stand at Sh823 billion. The gap in the estimated Sh2.7 trillion budget was to be plugged through borrowing - locally and internationally.

Treasury expected to borrow Sh349.7 billion externally and Sh486.2 billion from the domestic market. It has in the past said it would reduce borrowing locally, which has been criticised for crowding out the private sector, with lenders preferring the safer Treasury Bills and Bonds as opposed to advancing loans to private players.

Amidst the ongoing pandemic, the PBO urged Treasury to renegotiate the terms and conditions of the existing loans, with a view of striking a deal for the moratorium, including having a grace period on interest and principal payments.

The other alternative is for the government to consider is divesture as a source of financing.

The Sh823 billion hole in the next financial year’s budget will push up the national debt substantially, which as of March, stood at Sh6.3 trillion.

Whether Kenya’s debt is sustainable has been a contested issue but stakeholders are increasingly noting that the country might soon be unable to service its debt obligations.

Over the next financial year, Kenya is expected to pay its lenders Sh904.7 billion in interest and principal repayments. The Budget Committee noted that the debt repayments have outstripped development expenditure, which is projected to stand at Sh584 billion next year.

The PBO shares the sentiments, adding that the impact of the coronavirus pandemic will require Treasury to move fast in seeking moratoriums.

“A major decline in external receipts, remittances and exports, will dangerously expose the country to external debt repayment challenges.

“To avoid such unprecedented occurrence, the government should expeditiously seek moratoriums on debt repayment for at least one year,” said PBO in a report on the budget estimates.

Back in February, when Kenyans and the government did not think much of Covid-19, the Treasury was optimistic that the Kenya Revenue Authority (KRA) would collect Sh1.8 trillion in ordinary revenues over the 2020/21 financial year.

Then, Treasury mandarins may have thought that among the year’s major challenges would be the usual fights with tax-avoiding and evading Kenyans – both firms and individuals – as well as the year-in, year-out challenge of broadening the tax base.

Today, this appears to be far-fetched, with Treasury revising down its targets for the next financial year to Sh1.62 trillion. This will even be lower than the Sh1.64 trillion that KRA is projected to collect in the course of the current financial year.

The expected decline in tax revenues is due to the slowdown in business activity, with firms making less which means KRA gets to collect less tax.

The lower tax revenues expected and the reliefs to industry and individual Kenyans are despite heavy demands on Treasury to look for resources to fight the disease as well as throw to the private sector a lifeline through stimulus packages.

Among these include the Sh53.7 billion announced by President Uhuru Kenya when he unveiled the eight-point plan economic stimulus programme. “The measures taken in response to the Covid-19 pandemic are expected to contribute to a decline in taxes on income, profits and capital gains (income tax).

“Given the uncertainty of revenue performance in the coming financial year, it is indeed important to curtail all non-essential and non-urgent spending to create space for pandemic related spending,” PBO noted in its report.

Reports in early May, which quoted different Devolution Ministry officials, indicated that more than 200 people had been killed by floods in some parts of the country due to heavy rains that were being experienced then.

That is more than 130 people that Covid-19 had killed as of last week, with the death toll standing at 84 as of Sunday. Floods had further displaced an estimated 800,000 people from their homes. Key infrastructure was also destroyed by floods, including roads and bridges which could see the country spend billions of shillings for on repairs.

And it does not stop at floods. Food insecurity which could worsen this year following the locust invasion, army worms and other diseases remain a challenge for Kenya. Treasury will have to raise funds to take care of them.

Nearly a million Kenyans have lost their jobs between January and March, according to official data, with thousands of others on the brink of joblessness as the Covid-19 continues to wreak havoc on global economies.

Millions are also eager to know how Treasury CS will address what is the worst unemployment crisis in Kenya’s modern history. According to the Kenya National Bureau of Statistics (KNBS), the unemployment rate stands at 13.7 per cent as of March, from 12.4 per cent in December 2019.

This is set to go up as more companies and businesses reel from the impacts of the coronavirus pandemic. Estimates from the 2020/2021 budget tabled in Parliament last week show that the State Department for Labour has been allocated Sh5.2 billion.

This has gone down by almost half compared to the previous financial year when it was Sh2.9 billion.

The biggest chunk of the allocation – Sh3.9 billion – is set to go to manpower development, employment and productivity management. General administration planning and support services are set to receive Sh454 million while “promotion of best labour practice” will receive Sh776 million.

Spurring economic growth is still the hardest task for the government with all major factors set to boost an economy seem stifled, especially with the ravages of the virus ravaging all sectors.

Thousands of Kenyans are jobless and tax revenues will fall.

Agriculture – Kenya’s mainstay – has also been hit by a wave of locusts.

Top government officials, however, relish the recent fact that Kenya overtook recession-hit Angola to become the third-largest economy in sub-Saharan Africa, according to data from the IMF.

However, Kenya’s economy is projected to tank by five per cent this year representing a Sh1 trillion loss of the country’s GDP, according to a report by McKinsey & Company.

The inflation target was set at five per cent for the financial year 2019/2020, with a flexible margin of 2.5 per cent on either side in the advent of an adverse shock. Treasury said the 2.5 flexible margin was to cater for effects of external shocks such as oil price variations and domestic shocks particularly weather-related.

Government data show that the country’s year-on-year inflation rate eased 5.47 per cent in May from 5.62 per cent in April. However, the Consumer Price Index (CPI) – a measure of the percentage change in the price of a basket of goods and services consumed by households rose 0.63 per cent in May.

For this financial year, the Treasury has to maintain price stability, especially on the back of lost livelihoods from the economic shocks of the coronavirus pandemic.

Youngster was to compete at global championships this year, but virus disruptions means he can't