Fate of Duale and senators squarely in Uhuru hands 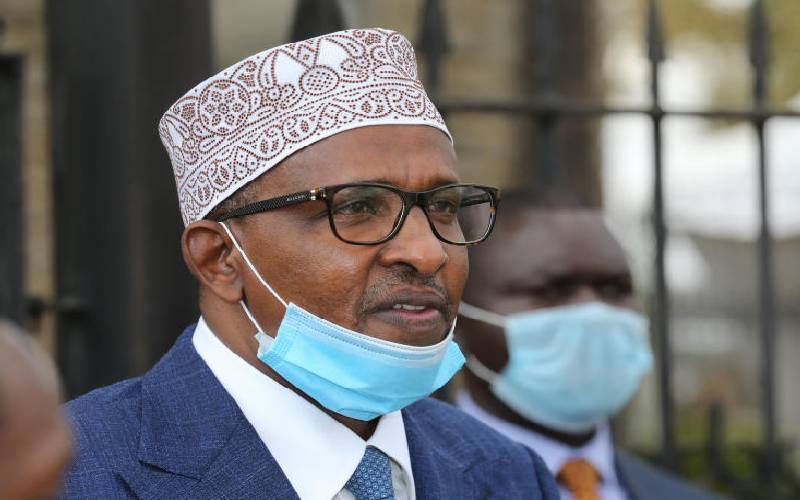 President Uhuru Kenyatta was last evening holding the last card on the fate of the Leader of Majority in the National Assembly Aden Duale (pictured) and six nominated senators who absconded a Jubilee Party meeting at State House several weeks ago.

Yesterday, a meeting to discuss Duale’s fate aborted with revelations the President was taking over his removal process which he wants to take through the formal party structure.

In a similar manner, the disciplinary committee which heard the truant senators is said to have forwarded its report to the party leader for consideration and direction.

“The report was handed to the party leader. He is at liberty to call for an NEC meeting and adopt the report or alternatively, act on the recommendations without reference to any other party organ,” said Jubilee Secretary General Raphael Tuju.

He said the Jubilee constitution allows the party leader to act on a report from a disciplinary committee as he pleases.

Yesterday’s meeting at the Jubilee headquarters had been occasioned by Kieni MP Kanini Kega’s move to kick out Duale through a popular initiative involving the collection of signatures.

A day later, 15 MPs allied to Ruto were given letters asking them to show cause why they should not be removed from their House committee leadership positions. On the same day, Kega initiated his signature drive which triggered yesterday’s events.

Wangwe had invited the MPs to the Jubilee Party headquarters at 2pm yesterday to deliberate on Duale’s removal.

“Following the petition to my office by the MP for Kieni on behalf of over 120 others, you are hereby invited for a Jubilee MNA meeting tomorrow June 8, 2020, at the Jubilee party headquarters at 2pm. Please keep time,” reads Wangwe’s message.

However four hours later, the Navakholo MP wrote to the MPs again saying after consultations, it had been decided that the petition be forwarded to the party leader, “therefore, the meeting scheduled for today at party headquarters has been postponed until further notice”.

At a press conference later, Wangwe said he had indeed invited the MPs but after deliberations, they agreed that President Kenyatta should be left to make a decision on the matter.

“As the Majority Whip, I take orders. It was agreed that the matter be referred to the party leader, who will instruct the Secretary General to give us a date,” said Wangwe.

He said the meeting was intended to resolve an issue in the party. It was decided that the Secretary General of the party will communicate when the meeting will take place.

Duale’s tenure has divided Uhuru’s inner circle with some insisting that his removal will disadvantage the President’s agenda in the House since the Garissa Town MP has performed well.

The group led by Jubilee vice chairman David Murathe is of the opinion Duele’s delivery has been tried and tested and bringing a new person two years before the end of the President’s term could affect the smooth flow of work in the House.